A legend, friend and mentor will be honored on Sunday when Joe Greene’s No. 75 is retired. It’s going to be special Steelers Nation.

The Pittsburgh Steelers have enough players in the NFL Hall of Fame to claim their own wing yet have honored only two players by retiring their numbers.

As the franchise retires Number 75, it’s time to review just what Greene’s legacy with the Pittsburgh Steelers means.

From Dan Rooney down, commentators regularly single out Chuck Noll’s selection of Joe Greene as the pivotal moment in Pittsburgh Steelers history. Joe Greene’s arrival certainly did certainly signal a sea shift for the franchise. But Joe Greene’s Steelers legacy runs far deeper, and neatly divides into six key contributions. Click on the gold links below or scroll down. 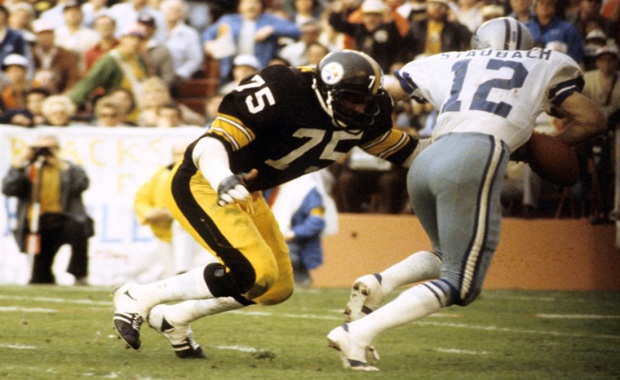 This story has been told before and it will be told again. And so it should be because for 40 years, the Pittsburgh Steelers had known nothing but losing. Nothing.

After the Steelers drafted him, Greene held out for more money. Draft picks holding out was unheard of before 1969. Joe did it anyway. He didn’t care. Dan Rooney agreed to his terms, and Greene reported to camp where Steelers veterans eagerly licked their chops for a shot at testing the upstart young rookie.

Ray Mansfield recounted, “To me, he’s just another big, fast-butted defensive tackle.” Mansfield winked at the other veterans as he took his spot in Noll’s famous Oklahoma Drill, which pitted an offensive lineman and a running back against a defender.

Stunned, the veterans stared at each other in silence.

Joe Greene repeated the process with each offensive lineman who challenged him. Dick Hoak recalls overhearing Pittsburgh’s incumbent defensive tackles openly discussing packing their bags. No one had ever seen anything like it.

No one here will question Russell’s wisdom. But if Greene’s arrival signaled a pivot in the Steeler’s direction, Pittsburgh still needed to make progress. And Joe Greene fashioned a place for himself at the center of it.

Establishing the Will to Win

Chuck Noll tolerated no nonsense. He didn’t bat an eye at trading the only offensive Pro Bowler he inherited, Roy Jefferson, when Jefferson tested him. Yet when Joe Greene began picking fights with Dick Butkus or grabbing a pair of scissors and heading for the Minnesota Vikings bench, Noll said nothing.

Years later, when the official refused to call holding on a pair of Philadelphia Eagles tackles despite repeated pleas from Greene, Mean Joe responded by lobbing the ball into the stands at Franklin Field.

The reason, many have speculated, is that Noll knew he had a truly gifted player in his hands, and one who refused to accept losing. Noll understood that the rest of his team must embrace Greene’s attitude, and The Emperor was wise enough not to tamper with that process.

Winning on the championship level at least, always requires something extra. The Immaculate Reception officially ushered the Pittsburgh Steelers into the era of winning. What made the play special wasn’t its improbability, but that, Franco Harris was in position to take advantage because “he hustled on every play.”

Watch the replay and you’ll see Joe Greene is one of the first person on the field to congratulate Harris.

The Immaculate Reception gave the Pittsburgh Steelers their first playoff victory in history, but first they had to get to the playoffs. A victory over Cleveland in week 12 gave the Steelers a 10-3 record, but they still had not clinched the AFC Central crown. To do that they needed to beat the 1-11 Houston Oilers in the Astrodome, which wasn’t as simple as it sounded.

L.C. Greenwood and Sam Davis were out to start. Jon Kolb and Gerry Mullins had the flu, and Mullins only lasted to the 3rd quarter. Bruce Van Dyke, another starting guard, pulled his calf and was gone in the first quarter, and his replacement Jim Clack hurt his ankle and was gone. Craig Hanneman, LC’s understudy, reinjured a knee and was done. Terry Bradshaw dislocated a finger in the 2nd quarter.  Dwight White injured a knee and Steve Furness sprained an ankle. Things got so bad that Larry Brown, a tight end who’d finish his days playing tackle, had to play wide out.

Joe Greene sacked Dan Pastorini five times. He blocked a field goal. He recovered a fumble and forced another, both of which set up Steelers’ field goals. At the end of the day, Pittsburgh prevailed 9-3, with Greene personally causing a 9 point swing.

Winning, on the championship level always requires players to dig for something, and Joe Greene delivered when called.

Setting a Precedent for Selflessness

Noll’s predecessor,  Bill Austin, didn’t bequeath him much except the “error” he committed in winning a few games at mid-season. This robbed the Steelers of the chance to draft OJ Simpson but Noll drafted Greene instead.

Pittsburgh’s defense had carried the team throughout the 1974 season, as Noll alternated between Bradshaw, Joe Gilliam, and Terry Hanratty.

Simpson had already logged his 2,000 yard rushing season in ’73, and rooked the Steel Curtain Defense in ’72 for 189 yards. The Steelers simply didn’t have the offensive fire power to keep pace should Simpson turn in a repeat performance.

Prior to the playoffs, he deployed the Stunt 4-3, which had Greene line up at an angle between the guard and center while Holmes lined in the other gap. Stunt 4-3 had a threefold impact:

The “downside” was that Joe Greene sacrificed opportunities to get to the quarterback. But the scheme worked. The Steelers held OJ Simpson under 50 yards in the AFC Divisional playoff game, and of course went on to win Super Bowl IX.

Suffice to say, number 75 would find little in common with modern-day prima donnas such as Keyshawn aka Meshaw “Will you just give me the damn ball!” Johnson.

By the late 70’s injuries had robbed Joe Greene of some of his dominance, but he got his first chance to make a contribution to his legacy off of the field.

Coca Cola was looking to make a commercial, and they came right to Greene. Watch it for yourself here:

With the simple phrase “Hey kid, catch!” “Mean” Joe Greene became a friend to every kid who ever wore a Steelers hat to school, including those growing up in suburban Maryland who wore hand- made Steelers’ scarves to Harmony Hills Elementary school.

In a moment, Joe Greene created a cultural icon and in doing so cemented a bond with a generation of Steelers fans too young to really appreciate his greatness on the field.

“What the Hell is Going On?” — Stabilizing a Legend’s Legacy

After Super Bowl XIV, Joe Greene’s dream was to get “One for the Thumb.” He continued playing in 1980 and 1981, but the Steelers came up short and out of the playoffs in both seasons. Greene opted to retire and begin his life’s work.

He opened 3 restaurants in Texas, all of which failed. He tried his hand as a commentator, but his gig with CBS only lasted a year. He didn’t finish his degree, nor did ventures in real estate or insurance sales pan out.

In 1987, Chuck Noll brought him back to Pittsburgh as a defensive line coach. Great players seldom make great coaches, although Washington DC’s WMAL’s Ken Beatrice insisted that Joe Greene could be the exception. Unfortunately, the Steelers defensive lines of ’87 to ’91 were nothing special.

Of all the defensive linemen he coached, only Keith Willis and Gerald Williams could be considered quality players. Donald Evans, Craig Veasey, Kenneth Davis? Not so much. Even Aaron Jones, whom Alan Robinson reports that Greene begged Noll to draft in 1988, made Ziggy Hood look like a stellar 1st rounder by comparison.

No, Joe Greene did something that perhaps no other individual could have done and he did it by walking into Dan Rooney’s office and bluntly asking:

“What the hell is going on?”

The 1988 Steelers finished 5-11 and looked as bad as their record suggests. Chuck Noll quipped during the season that the Steelers would have difficulty with a grade school team. At one point during the season Dan Rooney, uncharacteristically labeled the play calling “stupid.”

At the end of the season, Dan Rooney demanded that Chuck Noll fire some assistants.

Noll called his assistants together and detonated a bomb: he was quitting. Several of the assistants hit the phone seeking jobs. Others, including Dick Hoak, offered to resign to save Noll’s job. Per Ed Bouchette in Dawn of a New Steel Age, Noll quipped “No, you’re not the ones they want.”

Joe Greene walked down to Dan Rooney’s office and asked “What the hell is going on?” Dan immediately called Chuck Noll, asked him not to make a rash decision, and got him to agree to talk with him after Christmas.

The 1989 Pittsburgh Steelers would astound the critics and make the playoffs after a disastrous start. On New Year’s Eve, in the playoffs Noll would upset Jerry Glanville in overtime at the Astrodome, costing his arch nemesis his job. The Emperor got his Last Hurrah.

It’s true that the 1990 and 1991 seasons which followed ended in disappointment. But Noll left as he should – on his own time and own terms, thanks at least in part to Joe Greene’s intervention.

Dan Rooney and Tom Donahoe interviewed Joe Greene for the Steelers head coaching job after Chuck Noll retired but ultimately settled on Bill Cowher. Greene later admitted he was disappointed by the decision, and moved on to coach for Don Shula in Miami and then for the Arizona Cardinals.

In 2004, when a coaching change cost Greene his job in Phoenix, he’d decided coaching wasn’t for him. But he still needed to work. Dan Rooney and Kevin Colbert named him Special Assistant for Pro and College Personnel focusing on scouting in the Southwest in addition to pro evaluations. 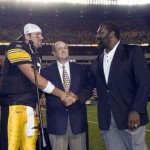 The response I got was, “I don’t know. That’s something we often talked about. But we’d see him at team headquarters all the time, and he was always working out one player or another, sort of as a coach emeritus or something.”

That squares with public accounts of Greene, who for example mentored Casey Hampton when Mike Tomlin banished him to the PUP list for showing up to camp overweight. Kevin Colbert praised Greene’s insight into the leadership qualities of college prospects.

Art Rooney II himself observed that without Joe Greene, the Steelers couldn’t manage to win a Super Bowl. But they did win Super Bowl XL the year after he returned, and then Super Bowl XLII three years later.

Coincidence? Don’t count on it.

One for The Thumb, and Then Some….

At the end of the day, Joe Greene got his One for the Thumb, and then he added another for Super Bowl XLIII another, making him one of a few select Steelers with 6 Super Bowl rings.

In every way, Joe Greene was, is, and always will remain the perfect portrait of a Pittsburgh Steeler.

One thought on “Joe Greene – Portrait of a Pittsburgh Steeler”