For the Steelers Defense, the “Band Is Back Together” vs. the Saints as, something will occur that has not happened since Pittsburgh’s 2012 road victory vs. Baltimore – Ike Taylor, James Harrison, Troy Polamalu, William Gay, and Brett Keisel will play together once again.

It’s an interesting twist of fate for a franchise that worked diligently to shake the “Old, slow and done” moniker that followed the 2011 opening day Debacle in Baltimore.

On the surface, that’s the easy conclusion. Ziggy Hood was drafted to replace Aaron Smith and fell short. They Steelers brought a lot of young defensive lineman to Latrobe, but ended up bringing Keisel back. 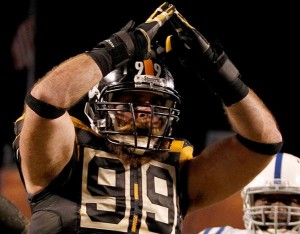 Keenan Lewis was good enough to start at corner, but the Steelers lacked the salary cap space to sign him. They resigned William Gay instead, while Cortez Allen has been benched.

Troy Polamlau signed a multi-year extension the day before the Debacle in Baltimore, and rightly or wrongly many characterized Polamalu’s deal as a mistake.

James Harrison of course left Pittsburgh, played for Cincinnati, retired and unretired and he’s now tied for the team lead in sacks.

As usual however, things are not as simple as they seem.

On the defensive line, while Kesiel has played well enough to open the door for his return in 2015, the Steelers are working in Daniel McCullers and Stephon Tuitt into the line up – a rarity for rookies in Johnny Mitchell’s defensive line. Don’t count out youth yet.

There was always an injury risk factor in bringing back Polamalu, but Troy has played well. His heir apparent, Shamarko Thomas has been hurt, which while bad, isn’t something you can “blame” on Mike Tomlin or Kevin Colbert.

Jarvis Jones was playing well before he got hurt, and the paucity of depth at outside linebacker forced the Steelers to break the glass and bring back Harrison. There are questions about what the Steelers will do with Jason Worilds, but again its way too early to write Jones off as a bust.

The real sticking point is at corner. Where fate and faith both seem to have failed the Steelers, which Steel Curtain Rising will take up tomorrow….