With Dick LeBeau officially out and Keith Butler officially in at defensive coordinator slot, focus should now shift to Steelers secondary coach Carnell Lake and the so-called “Lake Effect.”

But expand choice of metrics just a bit, and you’ll see that the roots of the Steelers decline on defense dig deeply into 2011. And there’s where the tale gets complicated….

The 2011 NFL Lockout created an off season void, which Steelers Nation largely filled for itself by repeating what became accepted as iron-clad fact:

It followed then that Bryant McFadden was a failure, Ike Taylor was slipping, Keenan Lewis was a bust, and William Gay a waste of a roster spot. Respected Steelers author and blogger, Tim Gleason aka “Mary Rose” of Behind the Steel Curtain went so far as to suggest that Art Rooney II order Kevin Colbert and Mike Tomlin to take a cornerback in the first round of the draft.

It was settled then. The Steelers needed to upgrade at corner, and they need to do it fast….

2011’s Debacle in Baltimore introduced “Old, Slow and Done” into NFL’s lexicon for discussing the Steelers. Yet it only 4 games into the season my friend and colleague at BTSC Ivan Cole (full disclosure, I also write for BTSC) noted a trend.

The Steelers pass defense wasn’t playing so badly. And in fact William Gay was playing pretty well. And Keenan Lewis, who’d been written off as a draft-day mistake, began to show signs of life. Ivan had a name for this. He called it, “The Lake Effect.”

Gauging the role of position coaches in player development is tricky.

Another BTSC scribe, Rebecca Rollet, documented how Steelers coaches had essentially given up on Keenan Lewis before Lake arrived on the South Side.

Today William Gay is the unquestioned leader of the Steelers secondary, boasting more pick sixes in a season than Mel Blount had in his career, while fans (and perhaps the front office as well as the coaches) universally lament letting Keenan Lewis get away.

Beyond those individual accomplishments, during the first two seasons following Lake’s arrival, the Steelers pass defense ranked number despite the absence of a consistent pass rush.

So Carnell Lake is an unqualified success as Steelers secondary coach right? Not so fast.

Another trend emerged in 2011 alongside the “Lake Effect,” and it’s one that continues today – namely a chronic inability on the part of the Steelers defense to produce turnovers. Interceptions are only one half of the turnover equation, they’re an important part.

And while interceptions can come from the defensive line or linebackers, often to great effect (see Brett Keisel vs. Houston), they’re the primary responsibility of the secondary. Numbers do not like on that measure, Lake doesn’t look so good: 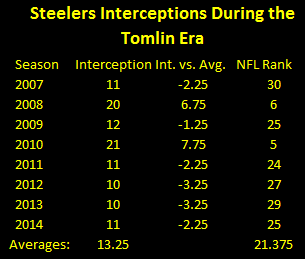 Graphically, the trends are even more dramatic (note, inverse values have been used to chart the Steelers NFL rank in order to achieve visual congruity): 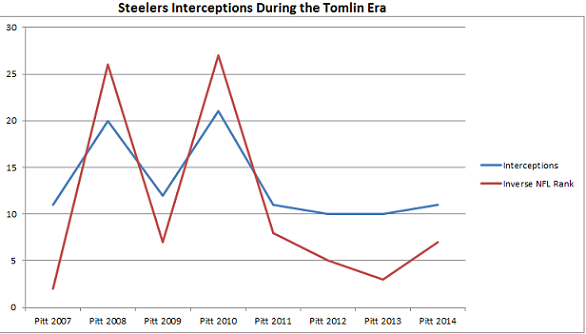 Steelers interceptions, by number and by rank

Looking at the numbers as a whole, it is clear that Pittsburgh has had trouble intercepting the ball throughout Tomlin’s tenure, with 2008 and 2010 standing out as exceptions. But even if the roots of the problem stretch back to Ray Horton’s tenure as defensive coordinator, the Steelers worst performances have come during Lake’s time.

In another era, the term “Number One Defense” meant yards allowed. But today, both thanks to information technology and to the way the game’s evolved itself, defenses are measured by points allowed and increasingly, by their ability to take the ball away.

The Steelers have struggled to do that. The struggle didn’t begin with Carnell Lake, but he hasn’t improve the situation either.

Of Cortez, Brice and Blake….

Cortez Allen was an unmitigated disaster for the Pittsburgh Steelers in 2014. He was supposed to be the secondary’s savior, instead he was put on injured reserve because the team needed his roster spot. Shamarko Thomas was also expected to push for time at safety, but couldn’t get off special teams. While it is unfair to hang that on Lake’s neck, neither Allen nor Thomas are not one of his success stories…

Brice McCain and Antwon Blake arrived at Latrobe as two players salvaged from the NFL’s scrapheap fighting for a roster spot. They finished the regular season by making the turnovers the Steelers needed to secure victory over the Bengals, and ultimately the AFC North Championship.

But we do know its Lake’s job to guide it, and he didn’t bat an eye in mentioning Blake’s name when asked why the Steelers didn’t take a corner early in the 2014 NFL Draft. Do two better than expected corners make up for the Cortez Allen disappointment? Do they vindicate Mr. Cole’s “Lake Effect Thesis.”

But Keith Butler is going to need to find a way to get the Steelers to produce more turnovers, and he’ll need to determine of Carnell Lake is capable of coaching the secondary to help do that. Butler’s choice will be interesting.