There are also a few powerful counter arguments, but at the end of the day the case for keeping LeBeau was pretty compelling, even if the Steelers saw it differently.

The first argument against the Steelers keeping Dick LeBeau is the easiest to dispatch. The Steelers defense performance has declined over the past several seasons, as LeBeau’s age has crept up towards 80.

“The game has passed him by” is a familiar refrain for any aging coach. Tom Landry, Don Shula, and even the legendary Chuck Noll found it hurled against them in the late 80’s. Jerry Jones saw to it, and very ignominious fashion, that Landry never got a chance to answer his critics. Don Shula answered by winning, although he fell short of winning big. Chuck Noll’s 1989 Steelers gave The Emperor his last Hurrah.

That’s simply because they don’t coach as long as LeBeau does. Nonetheless, the argument remains absurd. The rules changes of the 1970’s and 1980’s spawned the rise of the West Coast offense, which stresses ball control via short, high percentage passes.

Today the defense remains a viable alternative to combating passing offenses. Yes, it might not be as successful as it once was, but the rules favor the offense even more heavily today than even 10 years ago. But the idea that somehow LeBeau can’t keep up with the modern offense is inane.

As Mike Tomlin is wont to say, “Schemes are overrated.” Instead execution always carries the day. Case in point, during Super Bowl XXIII’s final drive, LeBeau anticipated the play, called a perfect counter play, only to see two defenders collide as the 49ers scored the go-ahead touchdown.

That leads to the next argument against LeBeau: That his schemes are too complex for the younger players that now form the Steelers defense. There’s some merit to that argument. But the evidence doesn’t quite back it up.

First, let’s look at the performance of LeBeau’s defense, week-by-week, during 2014. 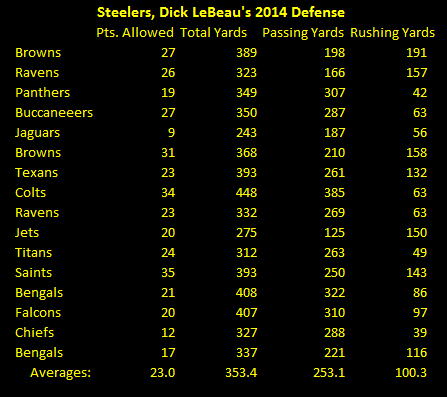 These raw numbers are interesting, but viewing them as a graph is more revealing:

While the trend isn’t quite overwhelming, you can see improvement in the latter part of the season. This trend becomes more revealing, if you look at it over a wider range of time. The nadir of LeBeau’s defense undoubtedly came in week 8 of 2013, when the Patriots pushed the Steelers around to the tune of 55 to 31, worse by many measures than the 1989 51-0 shellacking vs. the Browns.

How have LeBeau’s defenders responded since then?

Again, a graphical view of the data helps: 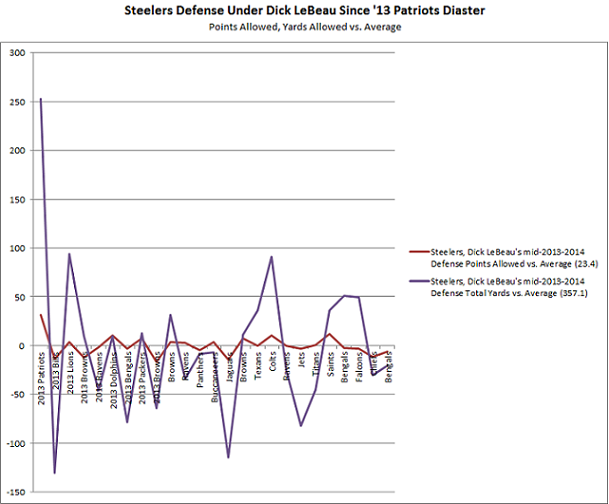 Steelers Defense Since ’13 Disaster vs. Patriots I

There’s a little bit of distortion in the graph, as both points allowed and yards allowed are plotted on the same X axis. Still you can see that by the end of the 2014 season, LeBeau’s defense is (generally) outperforming the average for the period in question.

In terms of passing and rushing yards allowed, you get a similar view: 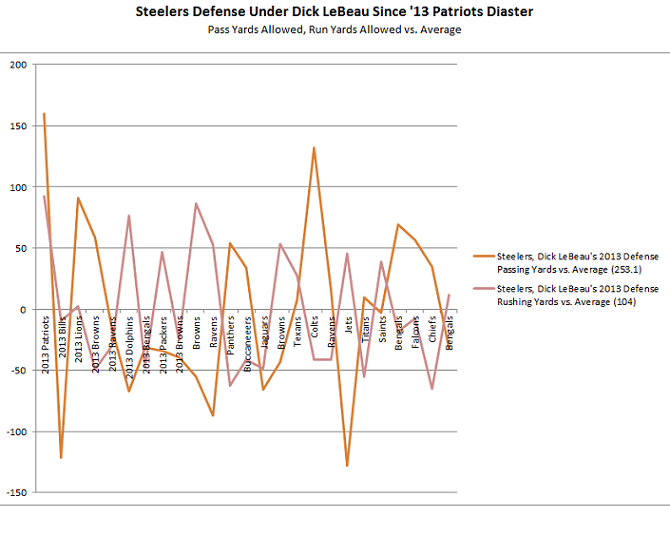 The rushing defense has clearly improved since that dark day in Foxboro. Improvement in the passing defense is also evident, although not as strongly.

As Neal Coolong, editor of Behind the Steel Curtain has argued, success in today’s NFL on defense is more about turnovers than yards allowed. There’s a lot to that argument, and the Steelers have struggled to take away the ball since 2010. It’s become a chronic issue.

Nonetheless, the fact is that the Steelers don’t often intercept the ball. Since 2011, the Steelers have ranked 24th, 27th, 29th, and 25th in interceptions. 2014 saw the trend tilt back towards the right direction, but it’s still far cry from 2010 when the Steelers ranked 5th.

What explains the Steelers sudden drop off in interceptions? The switch from Ray Horton to Lake as defensive backs coach could be part of the reason. But a more likely explanation would be that 2010 was the last time the Steelers fielded two Pro Bowl caliber edge rushers for a full season.

But that’s not LeBeau’s fault. The improvement of the likes of Cameron Heyward and Vince Williams – to name two players – shows that LeBeau’s system isn’t above the heads of competent young football players, even if it does take time.

The news is being described as “a mutual” decision, although LeBeau clearly says he is “resigning, not retiring.” Earlier in the year, Dejan Kovacevic indicated that it would be Art Rooney II and not Mike Tomlin who would make the final decision.

Butler had declined numerous offers to accept defensive coordinator responsibilities elsewhere. The Steelers had blocked his moves too, with pay increases and longer contracts. Perhaps Bulter indicated that he would leave to take offers elsewhere.

Either way, it is sad to see Dick LeBeau leave like this. He should have remained and retired a Pittsburgh Steeler.

2 thoughts on “Why Steelers Should Have Kept Dick LeBeau”