There are so many metrics used to measure the NFL Draft. You might assign letter grades – I’m sure you can already find people giving the Steelers A’s, B’s and C’s on their 2015 Draft.

Were you to boil it down by numbers it would look like this: 7 rounds, 8 players, 6 defenders, 2 offensive players, 2 Outside Linebackers, 2 cornerbacks, 1 wide receiver, 1 tight end, 1 defensive lineman, one safety.

Ultimately, only one metric counts when it comes to an NFL Draft class:

In the context of the Pittsburgh Steelers, winning Super Bowls is the sole metric of success. Kevin Colbert and Mike Tomlin’s talent evaluation skills will be judged whether they surround Ben Roethlisberger with enough talent players to bring home another Super Bowl while Big Ben still has viable years of his prime remaining.

Too Early to Give Draft Grade, but Steelers 2015 Draft Class Meets Need 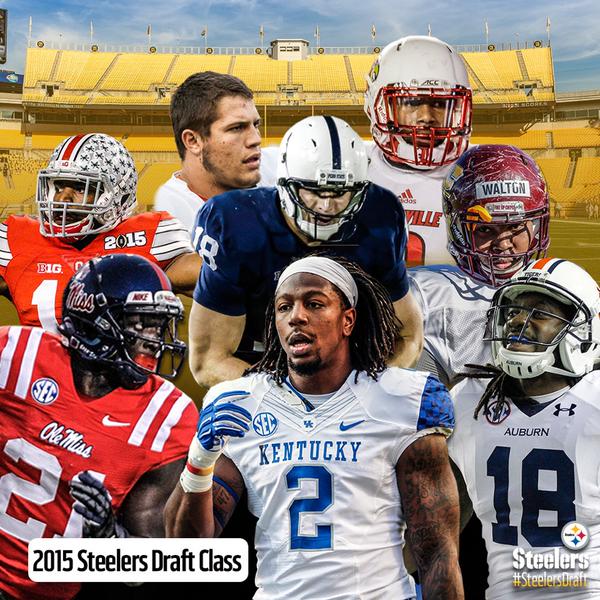 Given the urgency of Colbert and Tomlin’s task the longing, the temptation and dare we say the compulsion slap a grade the Steelers 2015 draft is understandable. The Steelers need to boost their defense in general and specifically their secondary and pass rush. Pittsburgh drafted 3 pass rushers and 3 defensive backs.

Steelers Nation wants to know whether they made the right decisions or horrendously squandered their opportunity. Unfortunately it doesn’t work that way, and that’s something that even the fastest internet connection can’t correct. We’ll know in a few years how it turned out.

Nonetheless, Kevin Colbert and Mike Tomlin made some important decisions in the 2015 NFL Draft, and these are the choices they made:

“Defense” is the watch word of the Steelers 2015 Draft Class. The Steelers have not gone all in on defense in a draft since 1993, when Tom Donahoe and Bill Cowher picked Deon Figures, Chad Brown, Kevin Henry and Willie Williams who developed into starters/part-time starters (accuracy buffs will note they also picked Marc Woodard and Jeff Zgonina.)

Steelers Pile Up Potential in 2015 Draft

In taking Bud Dupree and Anthony Chickillo, the Steelers injected two young talents into their outside linebacking corps., providing new blood into a unit that has struggled to put pressure on the passer.

In the secondary, the Steelers added cornerbacks Senquez Golson and Doran Grant, along with safety Gerod Holliman, which gives them 3 players who collectively nabbed 29 interceptions in 2014 – the entire Steelers defense had 11 in 2014. The Steelers also brought on board L.T. Walton, who’ll give the Steelers an extra tackle while in the 4-3 and an extra end while in the 3-4.

On offense, the Steelers went for value in the third round with Sammie Coates, a wide receiver who fills the slot role, and Jesse James, a local product who’ll fight Rob Branchflower for the third tight end spot.

Talent development takes time, but right now there are a few things we already know about the Steelers 2015 draft class.

The sorting out process will take time, injuries will occur and some players will simply disappoint, but the Steelers Nation has every reason to be excited about the Pittsburgh Steelers 2015 Draft Class.