Deflatgate is spurred the New England Patriots and their fans to fight back. Unable claim innocence, wish to claim “Everyone else does it” and thereby bring the rest of the NFL down into the muck with them.

How well do their claims hold up? The Watch Tower takes a look. 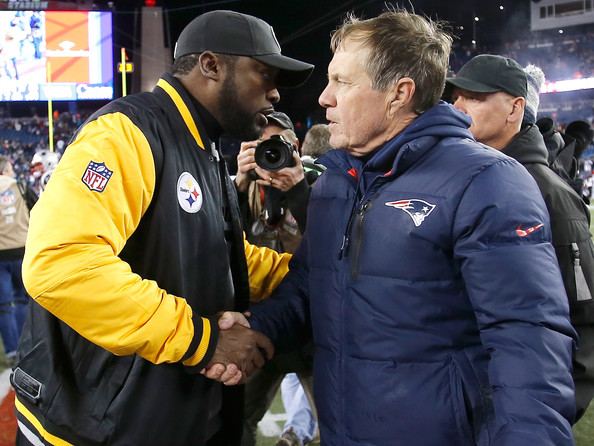 Your Team Cheats’ best argument against the Steelers comes in the case of Dr. Richard Rydze who was charged with distributing steroids, human growth hormone and other illegal substances. Dr. Richard Rydze was a Steelers team doctor from 1985 to 2007.

The blunt truth is that this story has been underreported both in Pittsburgh and nationally, something which was to be (and might still become) the focus of a Watch Tower column

Yet, Your Team Cheats fails to break ground here and provides no evidence whatsoever that Dr. Rydze was involved in distributing steroids to members of the Pittsburgh Steelers. Instead the site simply links to other pages on the site.

One of those does site Paul Wiggins and Joel Steed’s substance abuse violations, but fails to mention that Steed was using an over-the-counter supplement which happened to contain banned ingredients.

Your Team Cheats brings “Shoulderpadgate” or the Steelers illegal off season use of shoulder pads in 1978, a violation for which the Steelers were docked a third round pick. Really, there’s little to dispute here.

However, the one can question the tone of Your Team Cheats conclusions as current ESPN reporter John Clayton broke the story, and while the Steelers weren’t happy about it, Art Rooney Sr. later complemented him on it, and Clayton built a strong relationship with Noll afterwards (and Noll was not known for his warm media relations.)

That’s the downside of doing selective or at least incomplete research, which as the Watch Tower will make clear, seems to be the MO of Your Team Cheats.

Your Team Cheats Empty Arguments Against the Steelers

Your Team Cheats makes a number of bogus claims against the Steelers when it comes to cheating.

First, Your Team Cheats levies 5 cheating points against the Steelers for incidents of illegal hits. The idea of including illegal hits into an analysis of cheating is inane, because there’s a big difference between making a hit in a heat of a game that happens to be illegal and premeditated deliberate rule breaking.

Your Team Cheats summary of the Steelers cheating includes entries for Tampergate, Headsetgate, Spygate, and Scrapsgate. Note, the site doesn’t add “cheat points” to the Steelers score for these instances and adds no evidence whatsoever that the Steelers participated in any of these, aside from Bill Cowher’s statement that the Steelers would try to decode opposing team’s signals (without the use of illegal video.)

Your Team Cheats could, for example, cite a single case where the Steelers signed a recently cut or a practice squad player of an upcoming opponent, but fails to do so (in part, because the Steelers don’t do that.)

But that’s what Your Team Cheats would do if the site were a legitimate investigation into NFL rules infractions. But not the objective, instead the site’s objective is to suggest guilt by association.

Your Team Cheats makes a big deal about steroid use by the Steelers of the 70’s. Let’s be clear on something:

No one can dispute that. A handful of players have admitted to it. Steve Courson suggested before his death that there were many more members who needed to fess up.

To bolster its case, Your Team Cheats recycles comments by Jim Hasslett and Fran Tarkenton. He even recycles Hasllets hackneyed charge that the Steelers of the 70’s were “the ones who kind of started” use of steroids in the NFL.

It’s also inaccurate. The use of steroids in pro football dates back to at least 1963, when Sid Gillman’s strength coach Alvin Roy actively encouraged his players to use Dianabol and went as far as put them on the team’s training table in cereal bowls.

Both Jim Hasslett and Randy White (the later quoted in Gary Pomerantz’s Their Life’s Work) claim how their assumptions that the Steelers of the 70’s were using steroids prompted them to begin using…
…So if a high school guy starts drinking underage after getting dumped a girl who is also an underage drinker is the ex-girlfriend then to blame?

I daresay not, and steroid use in the NFL cannot be pinned on the Super Steelers.

There’s a problem with that. Steroids were not banned by the NFL nor were they even illegal until the 1980’s.

But that doesn’t change the fact that if steroids weren’t illegal, then using them cannot be considered cheating.

Were Al Davis still alive, it would be possible, and perhaps even plausible to suggest that he was Your Team Cheats source here. This story is part of Steeler-Raiders lore. The tarp covering the field at Three Rivers Stadium the night before the 1975 AFC Championship game tore, causing parts of the field to be icy.

The winter winds in Pittsburgh get pretty wicked. Tarps do tear, and water does freeze when the temperature drops below 32 degrees. Al Davis argument is that the tear was intentional, that the Steelers iced down the sidelines to weaken the Raiders deep passing game.

Your team cheats justification for toeing the Al Davis line boils down to “A groundskeeper who’s nickname is “Dirt” is always on top of his field conditions.” Ergo Steelers grounds keeper Dirt Dinardo did it. With an airtight case like that, is it any wonder this didn’t make it to the Supreme Court? One might suppose that, given the uncanny accuracy of his weather reports, longtime WTAE weatherman Joe DeNardo is also responsible for the wind, rain and cold in Pittsburgh that night.

Yeah, the Steelers strategy was to keep Terry Bradshaw from going deep.

Your Team Cheats on the Steelers and Salarycapgate

Perhaps Your Team Cheats most egregious entry on the Steelers involves “Salarcapgate” which relates to an incident in 1998 that ultimately led the Steelers to lose their 3rd round draft pick in 2001.

Although he never made a Pro Bowl, for nearly 10 years John Jackson protected Bubby Brister, Neil O’Donnell, Mike Tomczak and Kordell Stewart’s blindsides. When he became a free agent in 1998, the San Diego Chargers made Jackson the highest paid offensive lineman in the league at the time.

Near the end of preseason it was clear the Steelers had no one to play right tackle, so Bill Cowher moved Justin Strzelczyk to the right side and moved guard Will Wolford to left tackle. Wolford’s original contract had called for him to be paid an additional $400,000 should he play tackle instead guard. Unfortunately page of the contract containing that clause got left off and was never filed with the league.

Will Wolford’s agent remembered brought it to Dan Rooney’s attention who also remembered the original agreement, and the Steelers honored their word and paid Wolford. Knowing that this money needed to be accounted for, the Steelers turned themselves in to the league office. The league investigated, and took away the Steelers 2001 third round draft pick.

Your Team Cheats cites an article from the New York Times and the Bangor Daily News (that lifeblood of NFL information) and tells readers:

In all fairness, there’s a lot of information on the Steelers salary cap incident with Will Wolford which doesn’t instantly pop up when you Google it. But that’s no excuse, as a little extra digging did produce the links referenced above.

When held up to the Watch Tower’s light, most of Your Team Cheat charges against the Steelers fail to stick. What could have been an honest assessment of rules infractions in the NFL instead turns into a gigantic attempt at guilt by association.

For example, the New York Giants were founded in 1925 and the Baltimore Ravens were established in 1996. Yet they both have cheating scores of 35. That math simply doesn’t add up. Likewise, Your Team Cheats analysis of the Washington Redskins fails to take into account something which was once a stable of franchise policy which could be considered “cheating” at least by the site’s overly broad standards.

For the record, with Your Team Cheats debunked by the Watch Tower on behalf of Steelers Nation, the author of the site doesn’t seem to have any particular axe to grind against the Steelers. Rather Your Team Cheats is simply another site engaging in the 19th “art” of muckraking.

17 thoughts on “Watch Tower: Your Team Cheats Debunked on Behalf of Steelers Nation”