Heath Miller’s surprising retirement prompted an out pouring of support from Steelers Nation. And so it should. Heath Miller was fundamental to the Steelers success during his 11 years in Pittsburgh, and he played a critical role in the Steelers championships in Super Bowl XL and Super Bowl XLIII.

My first reaction when the Steelers drafted Miller in 2005 was “huh?” That’s not terribly surprising. I’m the polar opposite of a “draft nic” so the fact that Miller lacked a combine or pro day pedigree didn’t factor into my “huh?” Instead, my thoughts were much more pedestrian.

But I was OK with the pick. Pittsburgh’s depth chart at tight end featured Jerame Tuman, Jay Riemersma, Matt Cushing, and Walter Rasby, and 1st round draft pick figured to be upgrade.

The Indianapolis Colts played 2005 as the “Team of Destiny” laying waste to everyone in their path, until Bill Polian ordered Tony Dungy to rest his starters late in the season. Then Tony Dungy’s son tragically took his own life. Anyone with even an ounce of human compassion was rooting for Dungy. On top of that, the Colts had spanked the Steelers on Monday Night Football during the regular season. No one gave the Steelers a chance.

Bill Cowher and the Steelers however, brought a decidedly different game plan when the returned to Indianapolis for the playoffs.

Instead of trying to pound the Colts into submission with Willie Parker and Jerome Bettis, the Steelers would hook their hopes to Ben Roethlisberger’s arm. Roethlisberger’s missed his first pass to Antwaan Randle El.

That took them to the Colt’s 28. 5 plays later the Steelers were up 7 points in a drive where they threw 7 times out of 10, and Heath Miller accounted for 54 of the team’s 84 yards.

In my memory, probably like those of most Steelers fans, Pittsburgh went up 14-0 on its first two drives. But it didn’t happen that way. The Steelers defense forced a quick punt, but on the next drive, the Roethlisberger threw an interception. But Dick LeBeau’s defense forced another 3 and out. Then the Steelers offense struck again. A 45 yard pass to Hines Ward put the Steelers in the Red Zone at the Colt’s 8. Bettis ran for one.

An those are just the “major receiving threats” during Heath Miller’s time in Pittsburgh. Jerricho Cotchery, Emmanuel Sanders, Markus Wheaton, Antwaan Randle El, Nate Washington and even Willie Parker were more than capable of doing damage when the ball was thrown their way. So just how did Miller stack up? 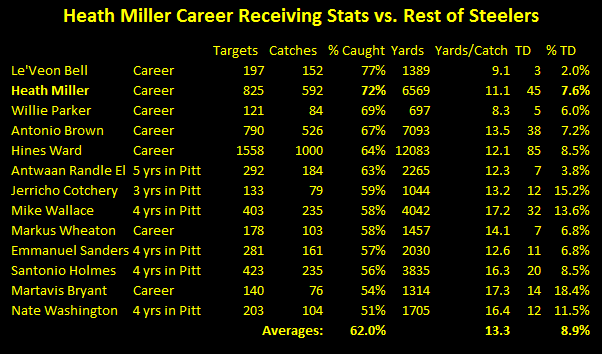 In 11 years, Heath Miller proved to be an incredibly reliable receiving target.

Thanks to saber metrics, we now not only know how many times a player has caught the ball, but we can also track how many times the quarterback tried to get it to him. To be fair, the ratio of catches to targets can be a little miss leading – if Ben Roethlisberger overthrows or underthrows Martavis Bryant 35 yards down the field, that counts as a target. But it’s a fairly reliable metric, and with each receiver having over 100 targets, the sample is fairly representative.

It might be tempting to suggest because, as a tight end Miller’s ran shorter routes and was less likely to be overthrown, but his yards-per-catch number is only one less than Hines Ward and not much further behind Sanders and Randle El

Those statistics create a pretty accurate picture of Heath Miller’s contribution to the Steelers offense, but mere numbers always fail to do Heath Miller justice. What made Heath Miller special was the effort, dedication, and concentration that it took to create the catches that those numbers represent.

Neal Coolong of The Steelers Wire offered this video to explain why Miller is so beloved in Pittsburgh.

Miller made an incredibly difficult catch, knowing he was going to be KOed. He took a vicious hit that drew a penalty, and simply handed the ball to the official, without any jaw boning. Oh yeah, the catch also secured first down. If Lynn Swann set the standard in Super Bowl X for acrobatic “Lynn Swann” catches then perhaps tough, short-to-medium yardage receptions that convert third downs should be known as “Heath Miller catches.”

Unlike the fullback, the tight end will not disappear from today’s game. However, “true tight ends,” ones that can both block like lineman and catch like backs or receivers are increasingly rare. Miller excelled at both.

Heath Miller’s play was dropping off gradually, but Miller’s 3 catch game in the regular season vs. Denver and 2 catch effort in the playoffs vs. Cincinnati were more indicative of his primary role as a blocker in those games rather than as a receiver.

But as Steel City Insider’s Jim Wexell reminded Steelers Nation, it was Heath Miller who held off Ray Lewis in the 2008 AFC Championship game just long enough to allow Roethlisberger to connect with Holmes and then Miller blocked for Holmes as he reversed field and took it 65 yards to the house.