When the Pittsburgh Steelers made running back Walter Abercrombie the 12th overall selection of the 1982 NFL Draft, he left Baylor as the school’s all-time leading rusher with 3,665 yards over four seasons.  What did the use of such a lofty draft selection of a running back with such a prolific collegiate career really mean? Here’s the simple English translation:

When Walter Abercrombie’s Steelers career began, Franco Harris had been the Steelers workhorse at running back for 10-full seasons, was 32 years old and, while nobody knew it at the  time, had two seasons of tread left on his tires. (The Steelers cut Franco Harris prior to the 1984 campaign during a contract dispute. He then signed with the Seahawks in Week 2 but Seattle cut Franco halfway through the season after he gained just 170 yards. Franco Harris never played again.) 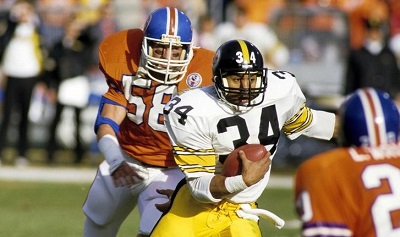 Walter Abercrombie rushes in the ’94 Steelers playoff upset over the Broncos. Photo Credit:

Unfortunately, much like a lot of things involving the Pittsburgh Steelers in the 1980s, Walter Abercrombie’s Steelers career never came close to matching Franco Harris’ or recapturing the magic No. 32 was a part of in the previous decade, when he helped lead the team to four Super Bowl titles.

As the AP pointed out in a story published on October 31, 1984 shortly after the Seahawks cut Harris, Franco retired from the NFL with the most career 1,000-yard  seasons (eight) and rushing attempts (2,949).

Not only did Abercrombie fail to fill Harris’ shoes, he was never the team’s leading-rusher in any given year. In six seasons with the Steelers, Abercrombie rushed for 3,343 yards and 22 touchdowns, and he often took a backseat to big, bruising fullback Frank Pollard, a 1980 11th round pick out of Baylor, ironically enough, who was Pittsburgh’s leading-rusher in the ’80s with 3,989 yards.

Indeed, early in the Steelers 1986 season, Chuck Noll did something he was not wont to do – he picked up Earnest Jackson off of waivers from the Philadelphia Eagles, and Jackson actually ended up getting two more carries than Abercrombie, despite starting 3 fewer games.

However, Abercrombie was a decent-to-great receiver out of the backfield, and caught 139 passes during his career–including 47 for 395 yards in 1986. You can see some of Walter Abercrombie’s receiving exploits for yourself (available as of 7/15/16):

In-fact, Abercrombie had such good hands there were some fans who clamored for him to move to receiver (and not necessarily out of love), so Rich Erenberg, a ninth round pick out of Colgate in 1984, could get a chance to start at tailback.

After six years in Pittsburgh, Abercrombie, bothered by knee injuries and with younger players like Merril Hoge on the rise, was released prior to the 1988 season and finished up his career with the Philadelphia Eagles one year later.

No, Abercrombie couldn’t replace Franco, and he clearly wasn’t a fan-favorite, but as he indicated to the Pittsburgh Post-Gazette in 2001, he understood what he was up against:

“It didn’t bother me,” Abercrombie said of not living up to fan expectations. “I had some big shoes to fill, and there wasn’t any way I was going to make the fans forget about Franco.”

Abercrombie did have some decent years, however. He rushed for 851 yards in 1985. One year later, he added another 877 yards on the ground, which, coupled with those aforementioned 395 receiving yards, gave him 1,272 yards from scrimmage.

Sadly, Abercrombie’s two best years coincided with back-to-back losing seasons, which hadn’t occurred during Chuck Noll’s regime since 1970 and 1971– not so coincidentally the last two years before Harris arrived on the scene in 1972.

But Abercrombie did have some crucial performances for the Steelers in high stakes situations. As the aforementioned Post-Gazette article pointed out, No. 34 rushed for 75 yards and added another 18 receiving yards in a Steelers 24-17 upset of the Broncos in a 1984 divisional playoff game at Mile High Stadium.

However, two weeks earlier, in the final regular season game against the defending Super Bowl-champion Raiders in Los Angeles on December 16, 1984, Abercrombie had perhaps the best day of his career–and right when the Steelers needed it most.

When the Steelers (8-7) took the field at 4 p.m. EST, they did so with the knowledge that they needed to win in-order to capture the AFC Central Division title. Earlier in the day, the Bengals wiped out the Bills, 52-21, to finish at 8-8. Cincinnati held the tiebreaker, and a Steelers loss would mean missing the postseason for the third time in five years.

Thankfully, Abercrombie came through with 111 yards on the ground and another 72 through the air–including a 59-yard catch-and-run late in the game that set-up Pollard’s one-yard touchdown plunge.

“I had one of the best collegiate football experiences a player could have,” said Abercrombie, in a story published by Baylor Lariot in May.  “Aside from the individual honors I earned as a player, I had outstanding coaches and dedicated teammates. Also, we won a conference championship and went to two bowl games.”

According to a 1997 Sports Illustrated article featuring Abercrombie, when he came into the NFL in 1982, he was part of a rookie group of running backs that had the potential to be the best in the history of the draft (think the 1983 NFL Draft class of quarterbacks that produced Dan Marino, John Elway, Jim Kelly, and of course Ken O’Brien, Tony Eason, and Todd Blackledge.)

Unfortunately, other than the legendary Marcus Allen, ’82’s class of running backs failed to live up to the hype. Said Abercrombie in ’97: “You have a window of opportunity for greatness. I didn’t step through that.”

Walter Abercrombie’s Steelers career may have fallen short of filling the shoes left by Franco Harris, and he certainly didn’t leave behind much of a Steelers legacy. But the love and respect he has at Baylor shows that, well, maybe a Steelers legacy isn’t the only one that matters.