If you’re a Steelers fan and familiar with Pittsburgh’s  usual participation in the annual free agent frenzy that began in 1992, you’ve probably long-since resigned yourself to not expecting much in the way of splash-signings.

It came about following a high-profile defection, when Jerrol Williams, a fourth round pick out of Purdue in the 1989 NFL Draft who had just supplanted veteran Bryan Hinkle as the starter at left outside linebacker in 1992, signed a restricted free agent deal with the Chargers.

How would the Steelers, who were coming off one of their best seasons in years under first-year head coach Bill Cowher, respond and reload for the 1993 campaign? 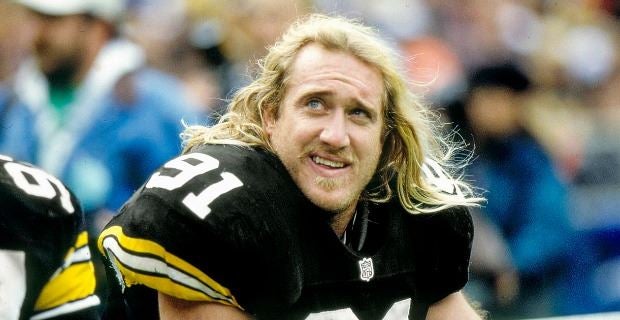 To say Kevin Greene, who will be enshrined in the Pro Football Hall of Fame this weekend and has made it known his favorite years were spent in Pittsburgh, and that he wants to have his official ring ceremony take place at Heinz Field in 2016, was an upgrade over the younger Williams is an understatement.

In ’93, Greene led the Steelers with 12.5 sacks and doubled the total of defensive end Donald Evans, who finished second with 6.5.

Perhaps more importantly, Greene made right legendary outside linebacker Greg Lloyd even more dangerous by creating a “pick your poison” scenario for opposing offenses. While Greg Lloyd recorded “only” six sacks in ’93, he had 111 tackles and five forced fumbles. Following such a great all-around season of devastation, Lloyd, who had already played in two Pro Bowls by that point, was named a First-team All-Pro for the first time in his career.

Two more All-Pro seasons followed for Greg Lloyd in subsequent years, and he was named the team MVP and UPI AFC Defensive Player of the Year in 1994.

All the while, Greene was doing what he did best: Sack the quarterback. While Greg Lloyd had arguably his best season in ’94, totaling 10 sacks and five forced fumbles, Greene posted an incredible 14 sacks, a record that would stand until James Harrison broke it in 2008 (despite defenders holding Silverback on nearly EVERY play.)

That kind of production from your outside linebackers in a 3-4, zone-blitz scheme is a dream-come-true. And, in Pittsburgh, with creative Steelers fans in abundance, this is going to lead to a nickname–or two.

Another nickname that became popular during the ’94 campaign was “Blitzburgh,” coined by Myron Cope after the defense recorded 55 sacks.

Blitzburgh may not be as enduring as “The Steel Curtain,” the nickname given to the legendary ’70s Steelers defenses, but when you hear it, it certainly reminds you of players like Greene and Lloyd, and the havoc they wreaked on opposing offenses in the mid-’90s.

But when you think about it, Greene got to play for an enthusiastic players’ coach in Cowher; the universally loved Dick LeBeau was the secondary coach and then the defensive coordinator during Greene’s stay in Pittsburgh; he played in-front of maybe the most passionate fans in all of sports and in one of the loudest places in Three Rivers Stadium; and he also made his only trip to the Super Bowl.

As fans, we sometimes reduce everything down to championships. The linebacker combo of Greene and Lloyd wasn’t as impressive as the duo of James Harrison and LaMarr Woodley, who teamed up for a combined 72 sacks from 2008-2010 and helped lead the Steelers to two Super Bowls and one Lombardi.

As far as free agents in Steelers history, other than James Farrior and Jeff Hartings, it’s hard to name a better one than Greene, who totaled 35.5 sacks during his three years in Pittsburgh.

The Rooneys sure got their money’s worth during Kevin Greene’s three years in Pittsburgh. Not only was he very productive, but the team was exciting, the fans were passionate, and it was fun to root for the Pittsburgh Steelers again.

Kevin Greene had a big role in making it fun to be a Pittsburgh Steeler again. It was also a time Kevin Greene has certainly never forgotten. Neither will Steelers Nation.