The 2016 Pro Bowl Selections are in, and the Pittsburgh Steelers offense will be well represented in Honolulu er, um Orlando.

No surprises there. With two games left to play, Le’Veon Bell has already logged 1,747 yards from scrimmage, with 1,146 rushing yards and a 4.8 yards per carry average. Who said the era of “Franchise Running backs” is dead? It is certainly alive and well in Pittsburgh. 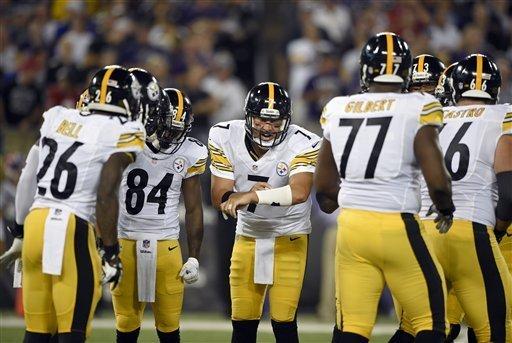 Antonio Brown will travel to his fourth consecutive Pro Bowl and his fifth overall. With two games left to play, Brown is closing in on another 100 catch season with 96 catches for 1,188 yards and 11 touchdowns.

While those numbers impress by any measure, Brown has done in a year when the Steelers have struggled to staff the number two wide receiver position, thanks to Matravis Bryant’s suspension, and injuries to Markus Wheaton, Darrius Heyward-Bey and Sammie Coates. Eli Rogers and Ladarius Green have helped loosen things up a little downfield, but they’ve only made their presences felt in the last fews.

Playing in his 13th year, Ben Roethlisberger has completed 304 passes for 3,540 yards, and going into season-ending matchups against the Ravens and the Browns, Big Ben has a real shot to pass the 4,000-yard mark for the fifth time. More impressively, Ben has thrown 26 touchdown passes while only throwing 11 interceptions.

About Those 17 Roethlisberger Sacks…

The fact that defenses have only brought down Ben Roethlisberger 17 times, and the fact that Le’Veon Bell has Hall of Fame type rushing average most certainly has something to do with the Steelers next two 2016 Pro Bowl selections.

Alas, the 2016 Pro Bowl voters did not opt to bestow their honors on any member of the 2016 Steelers defense. A year ago Cameron Heyward’s non-selection was a travesty but he was injured too early this season to make the cut.

Ryan Shazier would be the next likely candidate to make it to the Pro Bowl, but he doesn’t quite have the numbers while making a lot of All Pro type plays that don’t show up on the stat sheet. Ditto Stephon Tuitt who has had a tremendous year, but hasn’t made the type of highlight plays that get you Pro Bowl votes.

Since returning to a starting role, James Harrison hasn’t played at a Pro Bowl level, he’s played at an All Pro level, but Harrison didn’t start for the first 9 games of the season. (And let’s be clear, the fact that James is playing full time and the fact that the Steelers defense has gotten better are in not happenstance.)

Hopefully, the Steelers will play well enough that none of these men actually play. But to do that, Pittsburgh still must first beat Baltimore….