Boswell boots it! The game ball voting for the Pittsburgh Steelers win over the Cincinnati Bengals at Paul Brown Stadium was perhaps as lopsided as it has ever been, with Chris Boswell dominating the balloting. 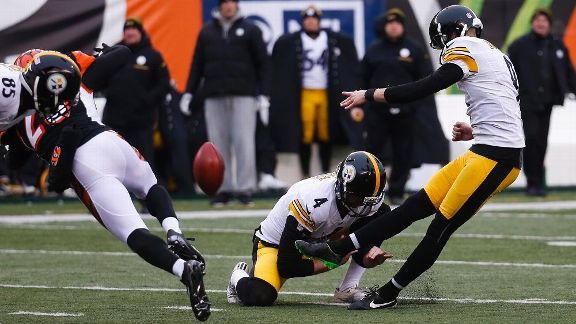 Chris Boswell kicks 1 of his six field goal during the Steelers win over the Bengals. Photo Credit: ESPN.com

Chris Boswell’s strong performance in the game ball polling is hardly a surprise, given his 18 points, several of them coming on long field goals, and his shoe string tackle of Alex Erickson. But no on expected such a landslide result.

After Boswell, James Harrison, Eli Rogers, and Lawrence Timmons were the next highest vote getters with each earning 3 votes a piece. They were followed by Ben Roethlisberger, Ryan Shazier and Ross Cockrell who each earned one vote. However, Artie Burns, Le’Veon Bell, Antonio Brown, and Ladarius Green were shut out of the voting completely.

None of these players had monster games, but all made important contributions to the win.

The Steelers game ball winners were the only poll we conducted here on Steel Curtain Rising. Our writer Tony Defeo raised the question as to whether Chris Boswell’s 6 field goals or his tackle was more important to the outcome of the game.

Armed with his essay, we took to Twitter to ask Steelers Nation what they thought. Here are the results:

By a bare margin of 2 percentage points, the fans have selected Chris Boswell’s tackle as the bigger play.

Chris Boswell scored 18 points, which is the equivalent of DeAngelo Williams or Darrius Heyward-Bey scoring three touchdowns. Yet his tackle prevented a touchdown on a drive where the Steelers defense held the Bengals to a field goal. That’s a 4 point differential in a game decided by 4.

Homer J. makes a strong case for the six field goals being more important over on Going Deep: An Introspective Steelers site. Regardless, we thank everyone who voted in this week’s polls.