The Steelers 31-27 win over the Ravens secured the AFC North, eliminated their rivals from playoffs and snapped Pittsburgh’s 4 game losing streak to Baltimore. The Steelers and Ravens fought an instant classic, featuring legendary performances on both sides of the ball.

Both stars and understudies stepped up at critical times to make the plays the Pittsburgh Steelers needed to prevail, but like all good Steelers-Ravens matchup, the winning team carried the day because they hit the hardest. 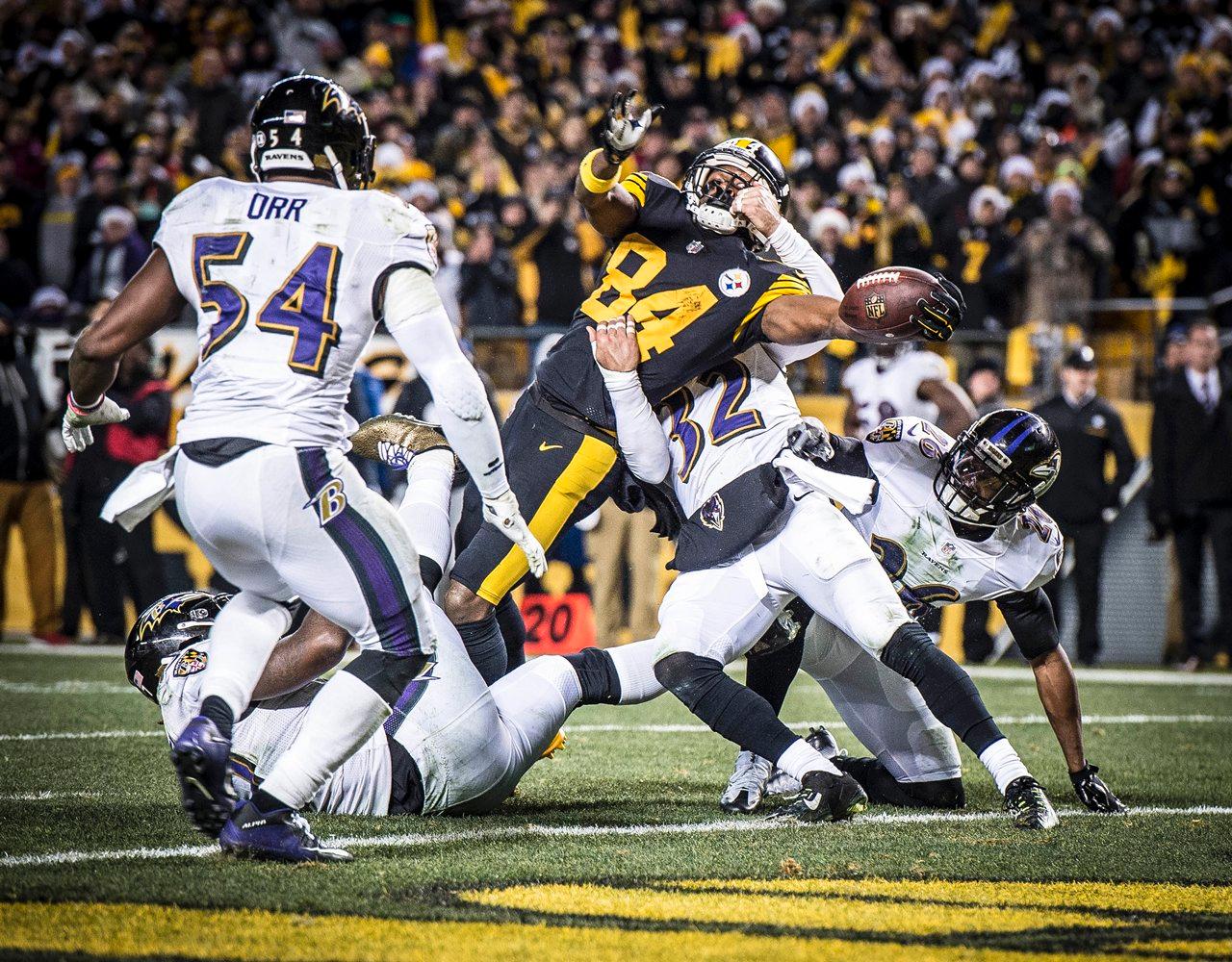 Perhaps most disturbing aspect of the Ravens win over the Steelers on November 6th was the fact that Baltimore dominated the line of scrimmage. Le’Veon Bell had 32 yards on 14 carries, and DeAngelo Williams only managed a single yard on his only carry.

Mike Munchak’s offensive line has played much, much better football since then, and the Steelers lineman came out early in the game looking liked they’d taken their November manhandling personally.

In the space of just over five minutes, Le’Veon Bell ripped off runs of 10, 7, 7, 6 and 10 yards. And, foreshadowing things to come, Ben Roethlisberger hit Xavier Grimble for a 20 yard touchdown strike, giving the backup tight end his first catch since the Steelers loss to the Cowboys.

More importantly, it established the game’s tempo – this game was going to be won in the trenches, with contributions coming from across the depth chart.

The Steelers wisely set the physical tone for the game, but unfortunately Pittsburgh struggled to keep pace. The Raven’s first half offense might have lacked fireworks, Steve Smith Junior’s 44 yard catch notwithstanding, but the Ravens established that Baltimore was ready, willing and able to match the Steelers physical challenge.

Both Lawrence Timmons and Bud Dupree had sacks which helped force punts, and on two other occasions, the Steelers defense turned away the Ravens offense, forcing them to settle for field goals.

But, more importantly, the Ravens defense responded to the gauntlet the Steelers had thrown down to open the game. Sure, the Steelers offense made its share of penalties during the first half, but the Ravens took advantage of those by forcing the Steelers to punt three times.

…Until the third quarter of the Ravens game. Ben Roethlisberger opened the 3rd quarter with an ugly interception, and closed it with an uglier one. Observer-Reporter scribe Dale Lolley spoke for everyone in Steelers Nation after the second pick:

Roethlisberger intercepted. Put a fork in this season. This is on the QB folks. Period #Steelers

Baltimore capitalized on the Raven’s first interception, scoring a touchdown and two-point conversion. Thanks to some smart play by James Harrison, Ryan Shazier and Sean Davis, the Steelers defense held the Ravens to another field goal following Ben Roethlisberger’s second pick.

More ominously, during their 8 minute 3rd quarter field goal drive, the Ravens had proven that they could run the ball on Pittsburgh’s defense, as L.T. Walton, Javon Hargrave and Ricardo Mathews seemed to struggle in Stephon Tuitt’s absence.

That did not bode well for a Steelers team that needed at least 2 scores in 15 minutes to take the lead….

Ben Roethlisberger Channels His Inner Hulkster in the 4th

In the 1980’s, Hulk Hogan transformed professional wrestling into a mainstream industry in large part by pretending  to get beaten into despair, only to rally when things looked to be their worst to secure victory.

Ben Roethlisberger started strong, only sputtered around for much of the first half, and then followed by playing some of the worst big-game football of his career in the third quarter. In the fourth quarter, Big Ben, did what true Hall of Fame caliber quarterbacks do – elevate their play when a trip to the playoffs hangs in the balance.

When NFL Films retells this game to future generations, they’ll rightly credit Roethlisberger, Le’Veon Bell and Antonio Brown for their All Pro 4th quarter performances. But the performances of the players below them on the depth chart, as well as the Steelers defense were just as important to the final outcome.

Let the record reflect, that when the Ravens got the ball back, they stuck with what had been working for them as Kenneth Dixon got 7 yards on two runs. But Bud Dupree stepped up and defended a pass on third down, forcing Baltimore to punt.

Le’Veon Bell took the first handoff and ripped off a 23 yard run. His next carry went for 13. Then Ben Roethlisberger hit Antonio Brown for 21 and 26 yard receptions where Brown earned the bulk of his yards after the catch.

Then the Steelers showed what makes their offense special. As Le’Veon Bell explained to Steel City Insider’s Jim Wexell:

…[Ben] was looking the other way. He said my name. I heard it. ‘L. Bell,’ that’s what he said. I’m blocking but I turned around and he was scrambling to the right but looking to the left, so when I caught it, nobody was there because he looked everybody off and he was wanting to go to me the whole time. That’s a special play but it’s stuff like that that he does all the time. In certain times in prime-time drives, when he knows we need it, he comes up huge. That’s what we need. You need that from your quarterback. You need that on your team.

With 7 minutes remaining, the Pittsburgh Steelers had pulled off a dramatic comeback to take a 24 to 20 lead at Heinz Field, having clearly put the momentum on their side. But the 4th quarter drama was only beginning….

There wasn’t a single Baltimore Raven who was ready to back down. Baltimore got the ball at the 25, where Joe Flacco proceeded to convert 3 third downs, as he moved down the field consuming precious clicks on the clock.

Ravens running backs had a number of impressive carries on this drive, as all of them refused to go down at first contact, and they fell forward each time. With just a minute 1:25 to play, the Ravens handed it to Kyle Juszczyk who saw a couple of Steelers bounce off of him en route to the end zone and a 27-24 Ravens lead.

This looks a lot like Dallas game. Can #Steelers answer? 1:18 remaining. Down 27-24 two timeouts remaining

Again, Dale Lolley echoed the thoughts of Steelers Nation. The lesson of loss to the Cowboys seemed to reveal that the 2016 Steelers simply weren’t that good.

If the Steelers 5 straight wins had disproved that lesson, then Kyle Juszczyk’s touchdown seemed to assure the Ravens a 5th straight win over the Steelers, hammering home the painful reality that John Harbaugh’s Ravens were simply better than Mike Tomlin’s Steelers.

Working with two time outs and starting at his own 25, Ben Roethlisberger hit Jesse James twice, Demarcus Ayers once, Eli Rogers once, and Cobi Hamilton once to bring the Steelers to the 4th yard line with 13 seconds to play. 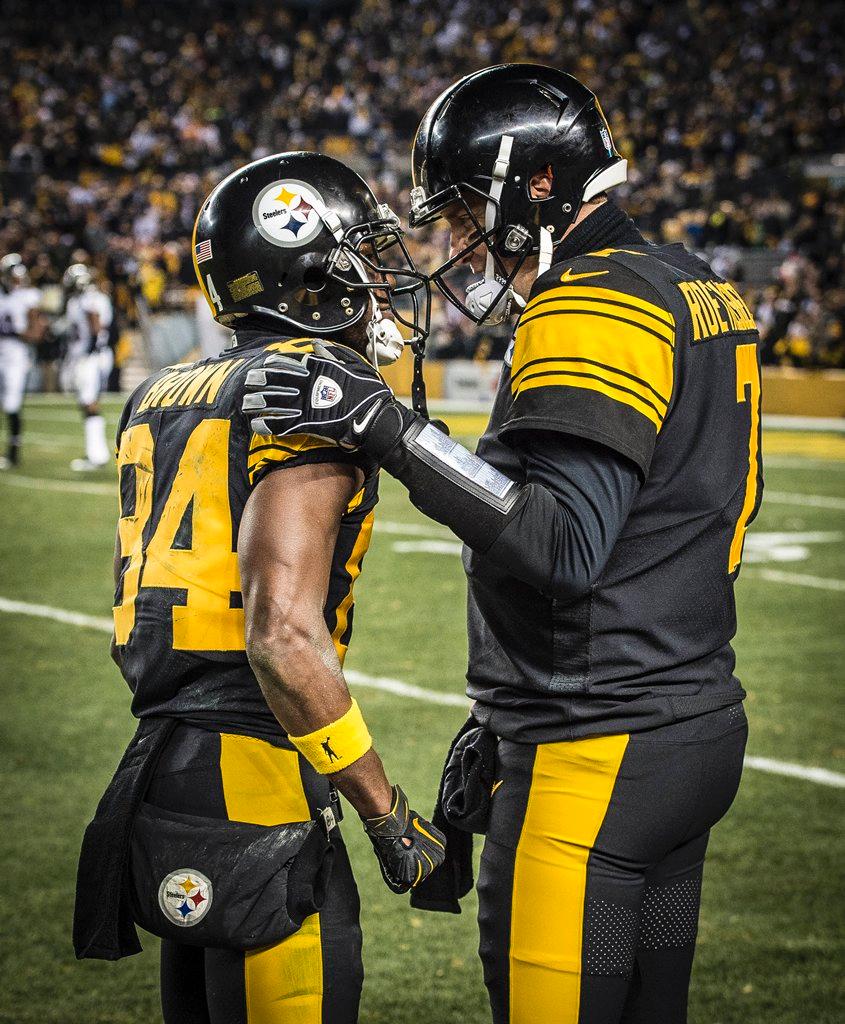 With no timeouts remaining, the easy call would have been to bring Chris Boswell on the field to tie the game and bring on overtime.

Ben Roethlisberger, in turn, trusted Antonio Brown to get across the goal line, even though he had two men in front of him.

But in the end, they couldn’t hit Antonio Brown hard enough. Brown broke the plane, which ut  Pittsburgh ahead for good. The Steelers were AFC North Champions, while the Ravens would spend January at home.

Steelers in Position to Make a Run for a Ring

The 2016 Pittsburgh Steelers began the season looking like sure-fire favorites to contend for a championship. Midway through the season, things looked quite differently, as rookies struggled to learn the defense, and injuries took their toll on the offense.

The Steelers scratched and clawed their way first back to respectability, getting a little better each week. Now the Steelers are headed to the playoffs for the 7th time since Mike Tomlin arrived in 2007. Can the Mike Tomlin’s Pittsburgh Steelers bring home Lombardi Number 7 their 7th trip to the playoffs?

The Steelers won’t enter the playoffs as the AFC favorites, but both the resiliency and the championship caliber plays the men in Black and Gold  made against the Ravens proves that Pittsburgh is capable of proving a lot of people wrong.