The Steelers 9-game winning streak skidded to a thundering halt at Gillette Stadium with Pittsburgh’s 36-17 loss to the New England Patriots. The AFC Championship loss to the Patriots of course ends the 2016 Steelers season, their Super Bowl hopes and perhaps the last best hope of keeping Bill Belichick from breaking Chuck Noll’s Super Bowl record.

Ironically enough, 3 root causes fueled the Steelers 3rd AFC Championship loss to the Patriots: A failure to get pressure on Tom Brady, a lack of a playoff-caliber number 2 wide receiver, and a failure to control the line of scrimmage when it counted. 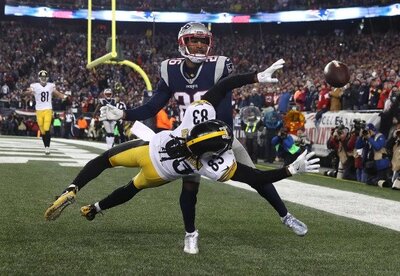 At 39, Tom Brady remains the best quarterback in the NFL, a status he seized 15 years ago in part by leading the AFC Championship upset against the Steelers at Heinz Field (with all due respect to Drew Bledsoe’s excellent relief efforts.)

Tom Brady gets rid of the ball quickly, but if you succeed in getting pressure on him, you can make him look human. New York Giants did it in two Super Bowls. The Denver Broncos did it last year in the AFC Championship. Houston even managed to hang with Brady for a few quarters by following the same formula. In the leadup to the game, the Steelers talked the talk of doing the same. 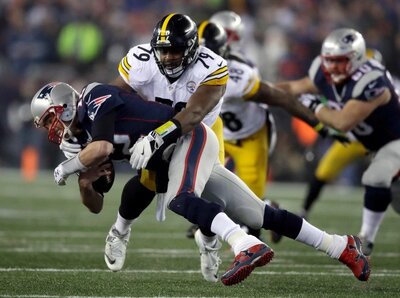 How well did the Steelers walk the walk?

In between, you’d be hard pressed to find a Steeler who breathed on Brady, much less touched him. (For the record, Stephon Tuitt is listed as getting a “QB hit.) It doesn’t take a football genius to predict the results.

The New England Patriots converted 11 of 17 third downs, Tom Brady threw for almost 400 yards, and Chris Hogan – a former lacrosse player – caught 9 passes for 180 yards. In his post-game video commentary, the Pittsburgh Post-Gazette’s Ed Bouchette remarked that Bill Belichick observed that the Steelers chose to only 3 rush three defenders most of the night.

If video tape analysis confirms that, then Mike Tomlin and Keith Butler should be questioned as to why they didn’t try to send James Harrison, Bud Dupree, Ryan Shazier and Lawrence Timmons after Brady more often. When you lose as badly as the Steeler lost to the Patriots in the AFC Championship game, coaches open themselves to such “What iffing.” 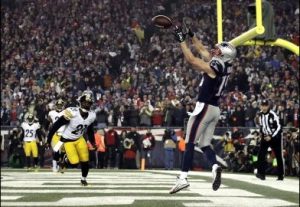 On Tom Brady’s first touchdown pass to Chris Hogan, the Steelers sent the house. Yet, the Patriots’ line completely picked Pittsburgh’s blitz so perfectly, that even at age 58, Mark Malone could have left the broadcast booth and made that throw. (And yes, it helped that there wasn’t a Steeler within 10 yards of Hogan.)

And that was the story of the night. The Steelers couldn’t and wouldn’t get pressure on Brady. Instead Mike Tomlin and Keith Butler trusted their young secondary to make plays in coverage, and Tom Brady scorched the Steelers secondary.

They revved up their sack production well enough to earn themselves a spot in the AFC Championship, but unfortunately on the biggest day of the season, the Steelers defense reverted to its early season form.

Wanted: A Playoff Caliber Number 2 Wide Out in Pittsburgh

A little over a year ago, as the Steelers headed to Denver for the divisional playoff game, word was that Sammie Coates was the player to watch in the quest to compensate for Antonio Brown’s absence. Coates played well enough that day, that many coaches had him penciled in as Martavis Bryant’s replacement as soon as news of Byrant’s suspension broke.

IF Coates catches that ball, then he puts the Patriots on notice that the Steelers now have a multidimensional, vertical passing game, and he forces them to respect it. Instead, Coates dropped the ball and the Steelers punted.

Coates’ drop isn’t much of a surprise for those following his multiple broken fingers story and/or his latent loss of Ben Roethlisberger’s confidence which writers like Steel City Insider’s Jim Wexell have alluded to. It’s telling, however, that the Steelers passing game focused so much on Coates, whom the Steelers targeted 5 times.

During the Steelers 9-game winning streak, Todd Haley has relied on reserve receivers Eli Rogers and Cobi Hamilton to take heat off of Antonio Brown. And the development of both of those men played a pivotal role in the Steelers late season rally.

Cobi Hamilton had a number of drops and negated his own touchdown by stepping out of bounds. Eli Rogers made some nice catches, but fumbled the ball away deep in Pittsburgh territory, when New England held a 27 to 9 lead late in the third quarter.

Jesse James played a strong game at tight end, his failure to get into the end zone notwithstanding. He might not be a true number 1 NFL tight end, but he was not a liability on the field. The same could not be said for other Steelers pass catchers not named Antonio Brown or DeAngelo Williams.

On a night when Le’Veon Bell was lost early the Steelers were going to need their passing game to pick up the slack. They weren’t up to the task.

Failure to Control the Line of Scrimmage When It Counted

On the face of it, the Steelers offensive did a stealer job against the Patriots, while the Steelers defensive line did its part against the running game. The Patriots failed to sack Ben Roethlisberger, and only hit him once per ESPN’s statistics. Fair enough. The Steelers line protected its quarterback.

But did anyone else notice the Patriots ability to completely collapse the Steelers offensive line in the Red Zone before the first half ended? DeAngelo Williams lost yards on two consecutive carries. It’s one thing try to ram it in and fail; it is quite another to get smothered in the process.

Officially speaking the Steelers run defense “shut LeGarrett Blount down” by holding him to below 50 total yards and keeping his average below 3.

On 1st and 10 at the Steelers 19, LeGarrett Blount ran 18 yards rugby-maul style to the Pittsburgh’s 1 with seemingly the entire Steelers defense hanging on. One play later, and Blount was in the end zone, and the Steelers were staring down an 18-point deficit.

James Harrison argued that the Patriots didn’t dominate the Steelers physically; for the most part that’s true. But these two series provide poignant examples of how the Patriots made critical plays when it counted.

Is this a harsh assessment of the Steelers performance? You bet it is. The New England Patriots were yet again superior to the Pittsburgh Steelers in another AFC Championship game. That’s a bitter pill to swallow after 9 straight wins.

All hope looked to be lost when the Dallas Cowboys scored two touchdowns inside the 2-minute warning to give the Steelers their 4th straight loss. Cameron Heyward going on IR prompted this site to declare an Aliens style “Game over!” yet the defense improved during the latter half of the season. And the Steelers spent large portions of the season playing two men who, a year ago would have been charitably projected as their 5th and 6th string wide receivers.

In a city that measures success in Lombardis, the 2016 Steelers weren’t quite ready for a Super Bowl run. Mike Tomlin is wise to remind everyone that the Steelers will arrive at Latrobe next summer starting from zero, just like everyone else in the NFL.

Yes, they will again indeed start at zero next July. But if the Steelers internalize the lessons they learned this season, they will give themselves and excellent chance of not only returning but also winning the AFC Championship and the game that comes after it….