The Super Bowl has arrived and, just as they have since 2010, the Pittsburgh Steelers are spectating with the NFL’s 30 also-ran teams. For a franchise that measures successful seasons in Lombardis and fan base with a “What have you done for me lately” mentality, 6 years without a trip to the Big Dance is a long drought.

And the lapse has gone on long enough, that even the most serious Steelers homer must acknowledge the elephant in the room, and the question we’ve strived to ignore has some legitimacy:

What’s that? Have you gone crazy? Isn’t that the wrong question to ask (it is)? Doesn’t everyone know that Mike Tomlin is the man with the proverbial monkey on his back? Musn’t Mike Tomlin STILL need to prove he can win the big one without Bill Cowher’s players?

Well, yes, there still are large segments fans in Steelers Nation along with a cohort of the press (see Colin Cowherd, Jason Witlock and sadly Terry Bradshaw) that insist that Tomlin’s inability to win without Cowher’s players this remains Dan and Art Rooney II’s fatal blind spot.

But really, if you buy into the Tomlin only won on Cowher’s coattails nonsense, then your intellectual honesty demands you apply the same standard to Kevin Colbert with respect to his predecessor, Tom Donahoe. Let’s see what happens when you do just that…. 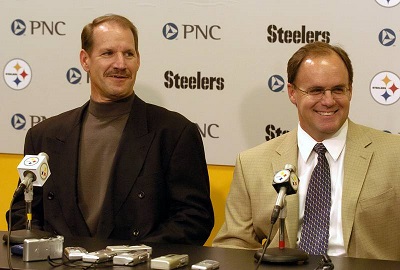 Tom Donahoe was of course the man Dan Rooney tapped in 1992 to be the Pittsburgh Steelers first ever Director of Football Operations following Chuck Noll’s retirement and Dick Haley’s departure for the Jets. For much of the 90’s, Donahoe was the most powerful person in the Steelers organization not named Rooney, until the Rooneys sided with Cowher in a power struggle, and sent Donahoe packing.

While Tom Donahoe made his mistakes, particularly as friction between him and Cowher got worse, if you really want to see his impact on the Steelers, look no further than the Steelers Super Bowl XL roster. Take a good look and ask yourself, could the Steelers have won Super Bowl XL if they had:

Hum… Take away Hines Ward, Joey Porter, Aaron Smith, Deshea Townsend, and Alan Faneca – all Donahoe draftees, and Jerome Bettis whom Donahoe acquired via trade and it’s a lot harder to imagine “One for the Thumb” arriving in 2005, even if this alternate timeline still saw the Steelers drafting Ben Roethlisberger in 2004.

By the time Super Bowl XLIII rolled around, the Bus had been parked, Alan Faneca had moved on to New York and Joey Porter was in Miami. But I defy anyone subtract the contributions of Hines Ward, Aaron Smith, and Deshea Townsend and map out a route for the 2008 Steelers that ends in a 6th Lombardi Trophy.

And if you really want to get picky about it, had the Steelers pulled out a win in Super Bowl XLV, Hines Ward would have likely won his second Super Bowl MVP award. But that, as well as the rest of this, misses the point.

Time to Retire a Tired Argument Used on Mike Tomlin

The argument that Kevin Colbert’s achievements are somehow diminished by the fact that Tom Donahoe acquired several critical contributors to both of Colbert’s Super Bowl teams is idiotic. Part of being a good leader is being smart enough and secure enough NOT to clean house for the sake of cleaning house.

There are two reasons:

First, to highlight the fact that while people always put Tomlin in Cowher’s shadow, no one ever follow suit with Kevin Colbert and his predecessor. Why shouldn’t the same standard apply to both men? The answer is that it shouldn’t apply to either man, which was the second and most important objective of this exercise.

The fact that Mike Tomlin enjoyed his greatest success (thus far) with a large number of men who’d previously played for Bill Cowher doesn’t taint his accomplishments in the slightest. And the pundits in the press as well as critics within Steelers Nation need to stop making that suggestion.

As Kevin Colbert himself observed after Super Bowl XLIII, the Six Lombardi equaled 6 Super Bowls for the Pittsburgh Steelers as a franchise, instead of four Chuck Noll and one for Bill Cowher.

Although, if at this point, you remain unconvinced, then by all means please hold Kevin Colbert to the same standard and do it with equal enthusiasm and frequency.