The Steelers sat and watched as first round picks Charles Johnson, Troy Edwards, Plaxico Burress and Santonio Holmes left in free agency (or were traded). They did the same with Antwaan Randle El after he authored a game-changing play in Super Bowl XL. If you count Yancey Thigpen, who was essentialy a waiver-wire pickup, the Steelers let their then single-season reception record holder walk in free agency.

IN a week when Antonio Brown signed his third contract in Pittsburgh, we turn our attention to whether Steelers free agent Markus Wheaton can break precedent and secure his second contract. 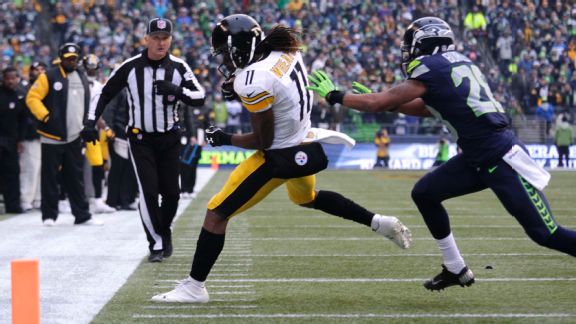 Markus Wheaton in his 9 catch 201 yard game in 2015 vs. the Seahawks. Photo Credit: John Froschauer, AP via ESPN.com

Although the Steelers “Young Money” phenomenon never quite lived up to its hype, Mike Wallace left Pittsburgh having made his mark on the Steelers wide receiving records. Markus Wheaton, whom the Steelers had drafted in the 3rd round of the 2013 NFL Draft, ostensibly came to Pittsburgh to replace Wallace.

Not that there was any pressure or anything.

Markus Wheaton is very fast, elusive in open field, good runner of reverses. Should be a playmaker right away

Unfortunately, injuries ruined Markus Wheaton’s rookie season. While he officially appeared in 12 games, Ben Roethlisberger only targeted him 13 times, of which Wheaton came down with the ball on 6 occasions.

Things looked better for Markus Wheaton going into 2014, as he earned the starting role alongside Antonio Brown. Wheaton had a strong game in the Steelers 2014 season opener against the Browns, but they struggled for the next several weeks. At mid-season he was all but forgotten in the excitement generated by Martavis Bryant’s debut.

Markus Wheaton’s 2015 campaign closely mirrored 2014. He got off to an inconsistent start, but stepped up his play during the latter half of the season proving he could be a viable number 2 NFL wide out (although he did have an ugly drop in the playoffs vs. Denver.)

Markus Wheaton injured his shoulder in the Steelers preseason game against the New Orleans Saints, and only appeared in 3 games for the Steelers in 2016 before going on injured reserve.

The Case for the Steelers Resigning Markus Wheaton

One year ago the Pittsburgh Steelers looked to field one of NFL’s deepest wide receiving corps in 2016. Instead the Mike Tomlin, Todd Haley and Richard Mann struggled to find someone who could occupy the number 2 spot opposite Antonio Brown.

To the team’s collective credit, the Steelers compensated effectively by leaning more heavily on Le’Veon Bell and by using quantity to make up for a lack of quality. That formula failed the Steelers in the playoffs, as evidence by the need for 6 Chris Boswell field goals in Kansas City and the disaster that was the AFC Championship.

Markus Wheaton might not give the Steelers a modern day “Swann-Stallworth” type combo alongside Antonio Brown, but he’s a reliable receiver and a legitimate number 2 that has proven he can make defenses pay should they decide to ignore him.

Better yet, because he spent most of his contract year injured, Markus Wheaton isn’t in a position to command a lot of interest or money on the free agent market. That makes the Steelers resigning Markus Wheaton a no brainer.

The Case Against the Steelers Resigning Markus Wheaton

Here are 6 simple reason why the Steelers need not think twice about resigning Markus Wheaton:

In a best case scenario, the Steelers will have the services of all six men on a full time basis next year. While Steelers know there’s no certainty that both Bryant and Green, either man offers Pittsburgh’s offense a far more dangerous weapon than Wheaton does.

Eli Rogers, Cobi Hamilton and Demarcus Ayers got pressed into service far earlier than anyone expected them two, and while Rogers and Hamilton had suffered their growing pains in the AFC Championship, these player did in fact grow up fast.

Bringing Markus Wheaton back, even on a “Prove It” contract, would mean risking exposing losing Rogers, Hamilton or Ayers, guys who have longer-term prospects in Pittsburgh. Given that, the case for investing salary cap dollars and a roster spot in Markus Wheaton seems rather weak.

Curtain’s Call on the Steelers and Markus Wheaton

In a number of albeit imperfect ways, Markus Wheaton’s development to this point in his career reminds me of Jason Gildon’s. Gildon was fortunate enough to do an apprenticeship behind Hall of Famer Kevin Greene, but by the end of Gildon’s sophomore season, Greene pronounced him as ready to start.

That worked out well for the Steelers, because by the time he became a free agent, he didn’t have the type of numbers to command a big contract and the Steelers resigned Jason Gildon at a relative bargain.

It says here that, at the right price, the Steelers would wise to bring back Markus Wheaton for at least 2017 as he offers a known commodity in the face of several other “ifs” and unknowns. If some other team wants to get an outlandish offer to Wheaton, so be it, but otherwise the he should remain in Pittsburgh.

*Technically speaking, the Steelers did bring back Will Blackwell for one season after his rookie contract that injury limited to two games.