Day two of the 2017 NFL Draft saw the Steelers draft JuJu Smith-Schuster in the second round, and Pittsburgh’s pick of the USC wide receiver helps prove that reality does really unfold at its own pace in the draft.

The Pittsburgh Steelers needed a cornerback (or a safety) and figured to get one after several prime candidates were left on the board following their pick of TJ Watt in the 1st round. However, no less than one dozen defensive backs were taken, or just under half of the 2nd round selections to that point, before the Steelers turn to pick at the 30th slot. 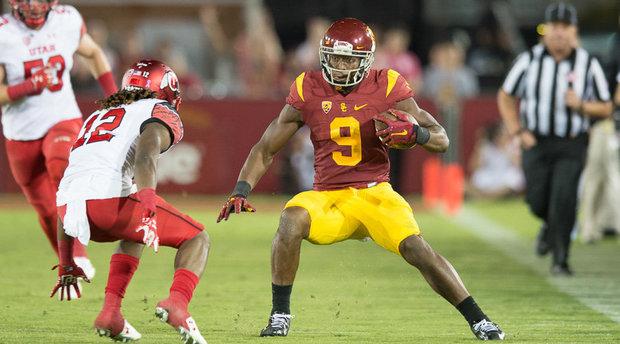 He is a good-sized receiver. He was very productive out there at USC. He is a really do-it-all guy. He can play inside, outside. If you had to say what he excelled at, I’d say his ability to catch the ball in combative situations, 50/50 balls as we call them, and he usually comes down with them. He’s a really exciting guy and we are excited to get him here to work on.

As Steel City Insider’s Jim Wexell detailed, as soon as reporters started asking Todd Haley if the Steelers picking JuJu Smith-Schuster amounted to an insurance policy on Bryant and Coates, Haley refuted the question, and then the Steelers PR team promptly terminated the interview….

Looking at his highlight reel, there’s reason to conclude that Mike Tomlin and Kevin Colbert did draft on his own merits:

Highlight reels can be deceiving, but JuJu Smith-Schuster stands at 6-1 1/2, weighs in at 215-pounder and brings the Steelers 4.54 speed after catching 70 passes for 914 yards and 10 touchdowns last season for the USC Trojans.

Following the pick, Martavis Bryant and Sammie Coates exchanged pleasantries on Twitter as to whose roster spot the Steelers may have jeopardized by the exchange. Mike Tomlin’s response was clear:

It would seem that Martavis Bryant and Sammie Coates were intent on showing the world just why the Steelers felt they needed to draft a wide receiver so high.

On paper at least, the move gives Ben Roethlisberger another tallish target to throw to, and someone who can potentially help take the heat off of Antonio Brown in ways that Eli Rogers or Cobi Hamilton can’t, and that Darrius Heyward-Bey hasn’t proved he do consistently.

Clearly the Steelers can carry Brown, Bryant, Coates, Smith-Schuster or their roster, with room for 1 or 2 more wide outs, but it is also safe to say that every Steelers wide receiver not named “Brown” should be looking over his shoulder.

Competition brings out the best in athletes, so with that we say “Welcome to Steelers Nation” to JuJu Smith-Schuster.