You’ll have to forgive me, but the only memory I have of former quarterback Steve Bono’s Steelers career is from my aunt through marriage.

We were watching some game in 1988 (since the Steelers finished 5-11 that year, it was no doubt a loss), and Steve Bono was standing next to starting quarterback Bubby Brister, when my aunt said, “Those guys are good looking.” 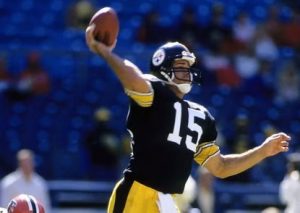 That’s it, that’s the only memory I have of the one-time scab, who once went 2-1 for the Steelers during the 1987 NFL players strike, before eventually departing for the 49ers and a few other NFL organizations during his 14-year NFL career that included stints with seven different organizations.

Bono was a sixth round pick of the Vikings in the 1985 NFL Draft, but did little of not in Minnesota before arriving in Pittsburgh as a free-agent signing in 1987.

Bubby Brister, the team’s third round pick in the 1986 NFL Draft, as Mark Malone’s backup and starter-in-waiting, there wasn’t much for Steve Bono to be for the Steelers other than their third-string quarterback, which he was during the first two games of the 1987 campaign.

But, unlike  the 1982 strike that resulted in a loss of nine regular season games, NFL owners decided to use replacement players to offset the ’87 work stoppage.

While Steve Bono wasn’t exactly “scab,” having been around for two years without a real career break, he crossed the picket line and wound up starting all three games for the the Steelers strike replacement quarterback during the duration of the ’87 strike.

Decent enough numbers, considering most of his replacement teammates were guys who were and would be (say it with me) bagging groceries once the strike ended, which it did after those three games. (OK, Hall of Famer’s John Stallworth and Mike Webster crossed the picket line too.)

Bono didn’t appear in any other games after the regulars returned in ’87 and only made two appearances for that infamous 5-11 ’88 squad, completing 10 of 35 passes for 110 yards, one touchdown and two interceptions as Todd Blackledge ultimately edged him out at backup quarterback.

Perhaps mercifully (for him, not Pittsburgh), Steve Bono was allowed to walk after the ’88 season as the Steelers opted to hand their third string quarterbacking clipboard to Rick Strom. Bono did well for himself, as he signed a deal with the 49ers to be their third-string quarterback behind Joe Montana and Steve Young.

But, in addition to earning two Super Bowl rings as an apprentice in both 1988 and 1989, Bono found his way into the starting lineup in 1991, thanks to back issues for Montana and multiple injuries suffered by Young.

In his book, My Life Behind the Spiral, Young, a future Hall of Famer, talks about the frustrations of dealing with injuries, as he watched Bono lead an admittedly talented 49ers team to many victories in his absence. The fact that some of the more 49er fans claimed that Bono should be starting over Young undoubtedly contributed to his frustration.

Steve Young ultimately reclaimed his starting job, and Steve Bono resumed his role as backup QB and remained in San Francisco through the 1993 season before signing with the Chiefs for the 1994 campaign.

In Kansas City, Bono started 31 games in three seasons (Montana was with KC by then and was the Chiefs starter through ’94) and won 21 of them–including 13 in 1995–while passing for 6,489 yards, 37 touchdowns and 27 interceptions. Unfortunately for Bono, he could never quite get his Chiefs over the hump and played out his career as a journeyman backup for the Packers, Rams and Panthers, before leaving the game following the 1999 season.

After all, Steve Bono had the benefit of playing behind legends the caliber of Montana and Young while with the 49ers and absorbing their wisdom. And what about his coaches in San Francisco? In head coach Bill Walsh and quarterbacks coach and then offensive coordinator Mike Holmgren, well, can you think of two better offensive minds?

It’s easy to say Bono may have beaten out passers such as Brister and O’Donnell in Pittsburgh, but the fact is, the Steelers didn’t have anywhere near the level of talent the 49ers had in the late-80’s and early-90’s.

Besides, Bubby Brister was pretty darn talented in his own right, and as for O’Donnell, well, it’s hard to top three division championships, two AFC title games and a Super Bowl appearance.

Perhaps it is safe to conclude that, Steve Bono was probably a safer “game manager” than either the Bubster or Slash, but he also lacked Brister’s rifle arm and Kordell’s big play potential. And Bono would have been an upgrade at backup quarterback over Mike Tomczak.

Could he have been more than that?

Steelers Nation is left to wonder.