James Harrison vs Ravens – Baltimore Brings Out Best in Deebo. Mike Tomlin Must Play Him

The Steelers Monday Night win against the Bengals may have been sobering and costly, but expect the Baltimore Ravens to show zero sympathy for Pittsburgh. While the Steelers have stayed a top the AFC North all season long, the Ravens have quietly been pulling themselves out of mediocrity.

At the final gun of the Bengals game, the Steelers were without 3 starters on defense (Ryan Shazier, Mike Mitchell & Joe Haden)  and minus two starting backups ( Tyler Matakevich & Coty Sensabaugh) due to injury or under performance. Seany Spence’s return should give the Steelers some depth, if not stability at linebacker, but if ever there was a defense in need of an octane boost its this one. 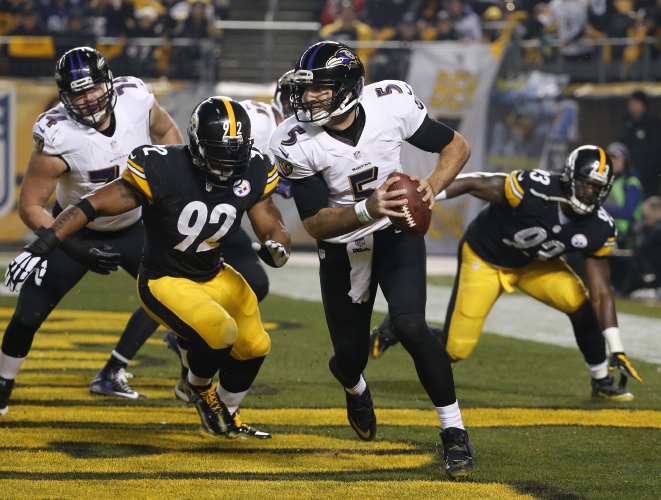 Fortunately, Mike Tomlin has that option available to him and its as simple as this:

Even in the face of such a litany of high-profile performances, its easy to write of James Harrison’s record against the Ravens as sentimental and perhaps a by-product of yesteryear. But while James Harrison may get emotional charged up to play the Ravens, the call to play him more is supported by data.

James Harrison vs Ravens – Deebo Brings is “A” Game. Always.

James Harrison has an uncanny ability to “turn it up” against the Ravens, much the same way that Franco Harris could find a something extra for the playoffs. In fully 66% percent of his games, or two out of every 3, James Harrison has sacked a Baltimore Ravens quarterback.

Out of James Harrison’s 82.5 (and counting) career sacks, 19 or just under a quarter of them have come against the Baltimore Ravens. During his career, James Harrison has had 6 multi-sack games against the Ravens, with two of those coming since his “retirement.”

None of this is to suggest that T.J. Watt should ride the bench against the Ravens. T.J. Watt is having a strong year and has shown he can do damage in a number of ways. In just about every game he’s play, T.J. Watt has made a heads up, “Wow, and he’s only a rookie” type play. He’s clearly a player on the rise and a wise first round draft pick.

Although James Harrison signed a 2 year contract with the Steelers this spring, he’s 39 years old, and T.J. Watt and Anthony Chickillo’s emergence only bring Harrison closer to his “Life’s Work.” Ditto Bud Dupree (ok, maybe not….)

But James Harrison brings his best against Baltimore. Playing James Harrison against the Ravens at Heinz Field wouldn’t simply give him a chance to out with a bang, it would also improve the Steelers chances of winning.