You have to feel for Karl Dunbar, the new Steelers defensive line coach who returns to Pittsburgh finding very shoes to fill. So just how big are John Mitchell’s shoes? How long of a shadow does John Mitchell’s Steelers coaching career cast? Well consider this:

And in the 28 years since, Steve Furness is the only other man besides John Mitchell to hold the title “Steelers defensive line coach.” To put that in perspective, Mike Tomlin has employed four different offensive line coaches since 2007. 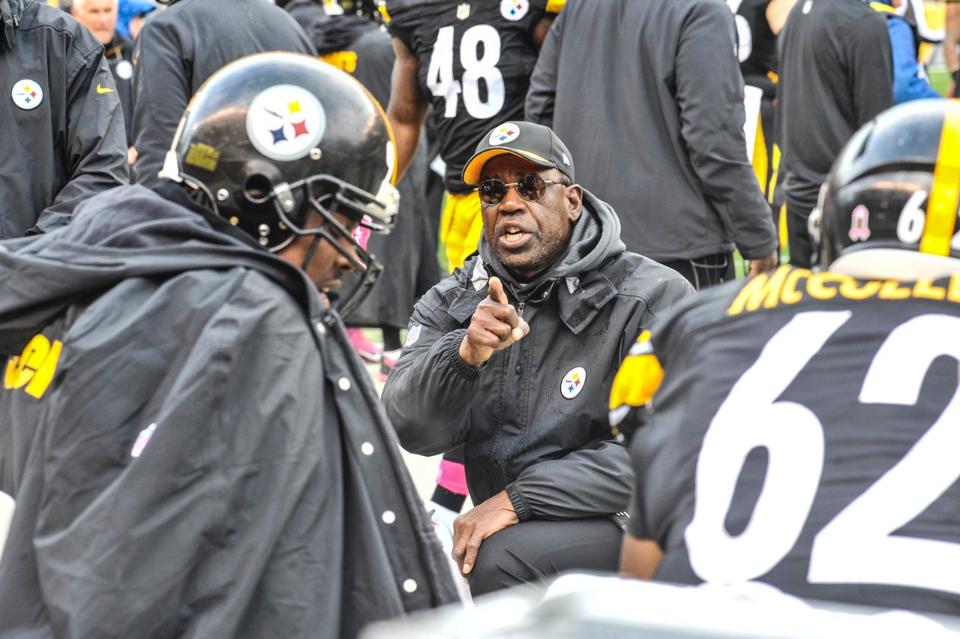 The 90’s failed to bring better times. In the 1990 NFL Draft, in addition to drafting Dunbar, the Steelers took defensive lineman Kenny Davidson and Craig Veasey in the 2nd and 3rd rounds. When neither man was delivering during the 1991 season, a reader asked Steelers Digest editor Bob Labriola what the problem was.

Sometimes, when luck runs out, its best to blow everything up and start from zero.

The 90’s — John Mitchell’s First Act with the Steelers

NFL position coaches don different hats. Sometimes they strategize. Other times they motivate and manage egos. They scout and evaluate talent. And they teach. John Mitchell excelled at teaching and you can see it in the methodical way Mitchell revived the Steelers defensive line.

As a defensive line coach, John Mitchell was known for taking you defensive lineman, stripping away everything they’d been taught in college, and building their skill sets up from zero. It would make a nice story to say that is what he did when he arrived in Pittsburgh in 1994, but that’s not quite accurate.

Its true that Bill Cowher had fired Steve Furness, a firing which Furness never understood or got over, after a 1993 campaign with a defensive line that featured Kenny Davidson and Donald Evans at defensive end (recognize those names? No, well there’s no reason to.)

The Steelers had already drafted Kevin Henry in the 1993 NFL Draft, and Henry had already worked his way into the lineup. Steed’s emergence allowed the Steelers to move Gerald Williams to defensive end, and the Steelers signed Ray Seals in free agency. So Mitchell didn’t have to start from zero with the group of players he inherited.

Brentson Buckner made it into the starting lineup as a rookie, thanks to injuries suffered by Williams, and other than Buckner in 1994 and Casey Hampton in 2001, no rookie became a regular starter on Johnny Mitchell’s defensive line until Stephon Tuitt in late 2014.

To be sure, Joel Steed emerged as a Pro Bowler by 1997, but his knees started giving out on him, and those injuries certainly played a part in the late season collapses of the 1998 and 1999 Steelers. And while Orpheus Roye’s emergence in the late 1990’s was a bright spot for the Steelers and Mitchell, the end of the decade didn’t leave a lot to smile about.

But those dark days did set the stage for John Mitchell’s best work.

Dan Rooney made changes after the Steelers 7-9 and 6-10 1998 and 1999 campaigns, both of which featured late season melt downs. Rooney fired Tom Donahoe and hired Kevin Colbert.

One of Kevin Colbert’s first moves as Director of Football Operations was to sign Kimo von Oelhoffen to replace Joel Steed. After six years in Cincinnati, von Oelhoffen could charitably be described as a journeyman. Under Mitchell’s tutelage, Kimo von Oelhoffen became a fixture on the Steelers defensive line, starting 94 games and ending his tenure in Super Bowl XL.

The summer of 2000 at St. Vincents yielded another surprise for the Steelers defensive line. A young, 6th round pick from the 1999 NFL Draft came out of nowhere to win the Steelers starting job at defensive end.

The 2001 NFL Draft brought Casey Hampton to the Steelers, giving John Mitchell a nose tackle that could effectively eliminate the middle of the field from the opposing team’s running game. Casey Hampton was of course a first round pick, and its easy to credit Hampton’s talent over Mitchell’s coaching, but Hampton succeeded where so many Steelers 1st round defensive lineman had failed.

After drafting Hampton in 2001, the Steelers brought in an undrafted rookie free agent name Chris Hoke and a year later they took Brett Keisel with their 7th round pick in the 2002 NFL Draft.

Chris Hoke didn’t develop into a superstar under John Mitchell and didn’t even appear in a game until 20014. But over the next 8 seasons Hoke appeared in 114 games and started 18 of them and never let the Steelers defensive line down.

Brett Keisel’s story is well known. He quietly worked his way into the line up during 2002 and 2003, because a regular part of the rotation in 2004 and essentailly pushed out von Oelhoffen to become the starter in 2006.

When reporters asked John Mitchell what he would do when Smith, Hampton and Keisel retired Mitchell said he’d join them. He wasn’t entirely joking. But fortunately he didn’t have to.

Fortunately, for the Steelers, Mitchell stuck around for the rebuild of the defensive line. Although far from a “bust,” Ziggy Hood didn’t work out as planned. But the Steelers hit a grand-slam home run in the 2011 NFL Draft when they picked Cam Heyward.

For a while they were joined by another young man who’d come to Pittsburgh as part of the 2009 undrafted free agent class. He saw his first action in the 2010 Steelers win over the Titans, and while Steve McLendon wasn’t a superstar, he did turn into a pretty solid nose tackle.

McLendon’s departure paved the way for the Steelers to draft Javon Hargrave, who like Casey Hampton before him won the starting job out of the gate. Hargrave had a spectacular rookie year, and if he suffered some growing pains in his second year, the arrow is still pointed up on the nose tackle from South Carolina.

In a word, John Mitchell has left Karl Dunbar with the tools he needs to do his job. And then some.

One of Mike Tomlin’s first moves after getting hired as Steelers head coach in 2007 was to add the title “Assistant Head Coach” to John Mitchell’s title. But as Bob Labriola implied, that was mainly a ceremonial title that carried few responsibilities.

Part of Mitchell’s role will be to take administrative tasks off Tomlin’s shoulders. He’s also going to help outreach efforts with former players from the Tomlin era. And word is part of his job is to give everyone “Tough Love” be it a player, an assistant coach or even Mike Tomlin himself when he sees something amiss.

But if Mitchell can reproduce the results he delivered as defensive line coach, then this might just be the change that pushes Pittsburgh’s quest for Lombardi Number Seven over the hump.