At the end of the day, Steel City Insider’s Jim Wexell was both right and wrong. In his predraft run up, Wexell devoted a full article which justified the possibility of the Steelers selecting Oklahoma State quarterback Mason Rudolph.

So Wexell was right there but he was still wrong. In the week before the draft, Wexell wrote that the Steelers should only draft Rudolph if they felt he was deserving of a 1st round pick. Well, they did not, and drafted him in the third round. 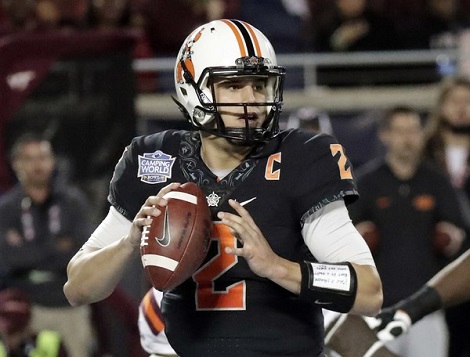 Steelers offensive coordinator and quarterbacks coach Randy Fichtner things that Mason Rudolph could have been a first round pick, explaining:

Beauty is in the eye of the beholder, and you know that some systems might fit better for certain people. I’ve liked him since the beginning, since we started evaluating him. I think that maybe if there’s any negative to his game, it might must be the ability to except and extend, but boy, you sure do see him do it a lot…. The ability to stand in the pock and make big plays on third down, be effective in situational football, the way he’s been, is very exciting.

The Steelers of course picked Rudolph one round after picking his favorite target, James Washington, in the second round. Rudolph discussed going to “the next chapter with one of your brothers, with your best receiver that you’ve spent your whole college days with, who you can potentially spend another 15 years with, that’s going to be one heck of a ride and I can’t wait to get it going.”

The story and idea of keeping a college QB-WR combo together makes for compelling copy, but there’s no assurance that the same magic can transfer from college to the pros. The Steelers made Charles Johnson, wide receiver out of Colorado their first round pick in 1994 and drafted Kordell Stewart in the 2nd round of the 1995 draft.

Charles Johnson wasn’t a bust, what was more of a Ziggy Hood type first round pick. The ups and downs that defined Kordell Stewart’s stint in Pittsburgh are well documented, but Yancey Thigpen and not Johnson was his top target.

The Steelers have invested heavily in scouting Mason Rudolph, with Kevin Colbert in attendance at Oklahoma State’s 59-21 win over Pitt last season, which saw Rudolph lead his team to 49-7 half time lead while throwing 5 touchdown passes.

Here’s a longer look at his highlight reel:

Mason Rudolph certainly can plan at the college level.

The question at this point isn’t whether he can play in the NFL, but whether he’s the successor to Ben Roethlisberger or not. When the Steelers drafted Landry Jones in 2013, they bent over backwards to assure the world that Landry Jones was coming to Pittsburgh to replace Charlie Batch and Byron Leftwich, not Ben Roethlisberger. A year ago, similar assurances were given regarding Joshua Dobbs.

You generally don’t project third round draft picks as franchise quarterbacks, but third rounders are premium picks whom you do expect to develop into starters. And the Steelers have a history of turning third round picks into starting quarterbacks, as evidenced by the careers of Buddy Brister and Neil O’Donnell.

The 1979 NFL Draft could perhaps offer some hope. The Steelers were picking last in each round, fresh off of their third championship from Super Bowl XIII, but they lacked a 3rd round pick thanks to John Clayton outing Chuck Noll for holding padded practices in the off season.

One slot before the Steelers would have made their third round pick Bill Walsh took a young quarterback who’d grown up in Western Pennsylvania. His name is Joe Montana and he ended up tying Terry Bradshaw‘s then record 4 Super Bowl rings.

Not too many 3rd round quarterbacks have succeeded in following that template since then, but Joe Montana’s story shows that Mason Rudolph can do what’s being asked of him.