When the Steelers selected Liberty tight end Eric Green with the 21st pick of the 1990 NFL Draft, I was a little underwhelmed, but that was nothing new.

After years of watching Pittsburgh select players like John Rienstra instead Keith Byars (1986) or Aaron Jones instead of anyone else on the planet (1988), I was used to my draft day fantasies being dashed by the Emperor Chuck Noll, a four-time Super Bowl-winning coach who certainly knew a little more about football than I did.

The Steelers did trade four spots down with the Cowboys, who used the 17th pick to select Florida running back Emmitt Smith, a man who would go on to capture the NFL’s all-time rushing record. But being angry over that now would be revisionist history, especially when you consider Pittsburgh used the seventh pick of the 1989 NFL Draft to to select Tim Worley, a running back Chuck Noll said reminded him of former all-time rushing leader Jim Brown.

On the face of it, the Steelers picking a tight end with their first round draft pick seemed rather odd, given that even the most hardcore Steelers fans old enough to remember the era would be challenged to remember a tight end other than Bennie Cunningham.

OK, Mike Mularkey had come to Pittsburgh via Plan B Free Agency, and had been a key role player in the 1989 Steelers playoff season, but the fact that he only needed 22 catches to be an “impact tight end” should tell you what you need to know about tight ends in the Steeler offenses of the 80’s. 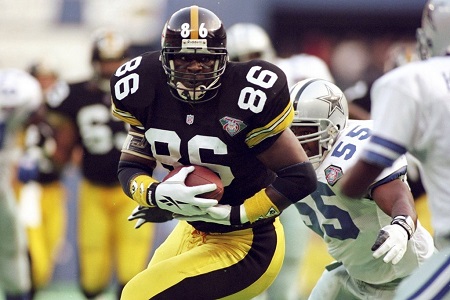 Therefore, looking at things from a pragmatic standpoint–and not through the eyes of an 18-year old Steelers fan who was looking for that draft day splash–the selection of Eric Green actually made sense.

What didn’t seem to make sense about a player selected in the second half of the first round–and from tiny Liberty University — was his willingness to holdout all of training camp, preseason and Week 1 of the regular season. Chuck Noll went as far as to say that Green would have to be a genius to contribute after missing so much time.

When Eric Green did finally sign, he was of no use through the first month of the season, neither was Joe Walton’s tight end-centric offense, one seemingly a little too complex to grasp for the likes of quarterback Bubby Brister, a player who certainly fit the mold of someone who had charmed cheerleaders into doing his term papers for him while he attended Louisiana Tech.

The Steelers did finally break through offensively in a 36-14 Week 5 victory over the Chargers, which just so happened to be Eric Green’s coming out party. Against San Diego, Green, who at 6-5 and 280 pounds and blessed with speed and athleticism that defied that kind of size (at least in those days), was a bit of a catalyst, catching three passes for 22 yards and two touchdowns.

For the season, Eric Green would go on to catch 36 passes for 387 yards and seven touchdowns, establishing himself as a legitimate weapon for a Steelers offense that sorely needed as many as it could find. In 1991, Green continued to establish himself as one of the best young tight ends in the NFL, catching 41 passes for 582 yards and six touchdowns.

1993 would be Green’s best year as a Steeler–and as a pro–as he caught 63 passes for 942 yards and five touchdowns, earning himself his first of two-straight trips to the Pro Bowl.

Eric Green’s legacy in Pittsburgh was tainted by a six-game drug suspension in 1992 and yet another hold out prior to the ’94 regular season. After the ’94 season, Eric Green left as a free agent and finished out the remainder of his 10-year NFL career with the Dolphins, Ravens and Jets

The conventional wisdom among Steelers fans is that Eric Green never lived up to his potential.

But Eric Green’s size, speed and overall athleticism defined a player who was clearly ahead of his time. Had he come along maybe 20 years later, there’s no doubt Eric Green would be up there with the likes of Rob Gronkowski as not only one of the best tight ends of his time, but one of the best offensive weapons in the game of football.

At the end of the day, Eric Green will never be known as an all-time Steelers great. But, had he played in another era, he may have been one of the greatest tight ends who ever played in the NFL.