The Steelers failure to reach a long-term deal with Le’Veon Bell has prompted many fans to call for Pittsburgh to lift the franchise tag, let Le’Veon Bell walk and rely on running back by committee.

Sounds feasible on paper. (Actually it doesn’t.) But even if it, there’s a problem:

The tendency took root in 2007 and has continued almost unabated since then. In 2007, Mike Tomlin vowed to run Willie Parker until “the wheels fell off.” The wheels fell off in week 16, forcing the Steelers to start Najeh Davenport in the playoffs with Verron Haynes coming off the couch as a backup. 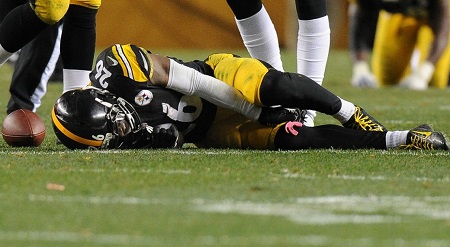 In 2008 the Steelers planned to use both Willie Parker and Rashard Mendenhall. A week 3 Willie Parker injury led to Mendenhall’s first start in week 4, where Baltimore broke his collar bone. Fortunately, the Steelers had solid running back depth with Mewelde Moore and Gary Russell filling the void until Parker’s return.

The Steelers streak continued in 2011 until Rashard Mendenhall tore his ACL in the season finale against Cleveland, as Isaac Redman started in the playoff Tebowing in Denver (for the record, Redman rushed for 121 yards on 17 carries.)

In 2012 the Steelers employed a variant of running back by committee, rotating carries and starts between Jonathan Dwyer, Isaac Redman and Rashard Mendenhall. Injuries contributed to this situation, but Mike Tomlin also wanted one of the trio to establish himself as the starter. None of them did.

In 2014 the Steelers made a wise disciplinary move in cutting LeGarrette Blount, but that forced them to sign Ben Tate after Le’Veon Bell’s pre-playoff injury. In 2015 injuries and suspension limited Le’Veon Bell and DeAngelo Williams to 5 join appearances, and DeAngelo Williams season finale injury at Cleveland forced Pittsburgh to start Fitzgerald Toussaint and Jordan Todman in the playoffs.

Any plans the Steelers had to spell Le’Veon Bell with DeAngelo Williams in 2016 went out the window when Williams injured his knee in week 6, limiting the tandem to 4 games together.

And of course last season the Steelers only opted to give James Conner a handful of carries, but an injury against New England in week 14 forced the Steelers to sign Stevan Ridley two weeks before the playoffs.

Calk it up to fate or chalk it up to mistake, but Mike Tomlin cannot seem to kept his top two running backs healthy, which doesn’t bode well for a shift to running back by committee. Or does it?

Counterpoint: Could Running Back by Committee Be the Cure?

In On Writing, Stephen King advises authors against plotting out stories in favor of putting characters in situations and then following them to their conclusion. King’s lesson is relevant to sports blogging, because sometimes your conclusions can morph into something else as you write.

Both the laws of attrition and laws of probability would suggest that running back by committee could mitigate these dangers.

Moral of the Story? Better Running Back Depth In Order

In the final analysis, I’m not ready to join the chorus calling for the Steelers to rescind the franchise tag and part ways with Bell. This tweet sheds a little light on my thinking:

And I suspect that about 95% of those "let him go" voters are not old enough to remember the days of splitting carries between Abercrombie, Jackson and Pollard. https://t.co/cGLHfDFYmG

That isn’t to say that the Chuck Noll’s offenses struggled to run the ball with Frank Pollard, Earnest Jackson and Walter Abercrombie. They didn’t. Nor could Mark Malone and David Woodley provide the type of air support that Ben Roethlisberger and Antonio Brown provide today.

And James Conners, Stevan Ridley and Jaylen Samuels have yet to prove they’re modern day equivalents of Pollard, Jackson and Abercrombie. But perhaps they can provide the type of quality and quantity of depth at running back behind Le’Veon Bell that the franchise hasn’t enjoyed since 2008….

…You remember, the season that ended at Super Bowl XLIII.