The Greeks called it “Fate.” Machiavelli used “Fortune.” But whatever term you choose, Vince Williams 4 year contract with the Pittsburgh Steelers proves that NFL success is all about capitalizing on opportunity.

The move ensures that all projected starters form the Steelers 2018 defense will remain under contract for 2019, promising stability for a unit struggling to recover its swagger. But for Vince Williams the move marks the latest milestone in one of the more unheralded players of the Mike Tomlin era.

Vince Williams: From Street Clothes to a 3rd NFL Contract

Its hard to know what the Steelers plans where when they drafted Vince Williams in the 6th round of the 2013 NFL Draft. Most likely, they viewed him as an insurance policy in the event that Sean Spence couldn’t recover for the devastating injury he’d suffered in preseason the summer before.

Vince Williams looked good in preseason, but the Steelers clearly didn’t see him as game day material as he stood in street clothes during their 2013 opening loss against the Titans.

You remember that game, the one that cost the Steelers Maurkice Pouncey, LaRod Stephens-Howling and yes – Larry Foote. Both the Steelers, and Vince Williams could do no more than watch as Kion Wilson entered alongside Lawrence Timmons.

But Williams saw action the next week against the Bengals, and by the time the Steelers played the Vikings in London, he was making his first start. But Williams struggled and often times was a liability in a Steelers defense that was slipping.

Fate, however, refused to deal Williams an easy hand. Sean Spence recovered, and the Steelers drafted Ryan Shazier in the first round of the 2014 NFL Draft. Instead of returning as a starter, Vince Williams would have to again earn a roster spot at St. Vincents.

Vince Williams proved his worth, and while Ryan Shazier started, Williams and Spence split time while Shazier was out with injury for much of his rookie season. Williams continued to see regular action in 2015, and the Steelers, in what amounted to minor surprise, offered him a three year extension in the summer of 2016.

The Steelers let Lawrence Timmons walk to Miami and Vince Williams took over his spot in the defense. While it may be hard to remember, the Steelers 2017 actually carried the team during the first half of the season and even flashing greatness prior to the Ryan Shazier and Joe Haden injuries.

If the data on the site Sportrac is reliable, Vince Williams new contract makes him the 16th highest paid inside linebacker, as measured by contract average. That puts him in about the middle of the back in terms of NFL starters, which sounds about right, if perhaps a little high. 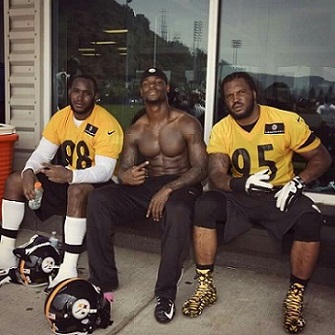 In 2017 Vince Williams was third on the team in tackles, and second in sacks behind Cam Heyward with 7. Inside linebackers in the Steelers defense only put up those kinds of sack numbers when they’re doing something right.

Vince Williams is never going to offer the athleticism that Ryan Shazier, Lawrence Timmons or even James Farrior brought to the position. He’s much more of a player in the Larry Foote mold, a bruiser, a guy who makes contact, and a guy who can be counted on to bring down a running back at or behind the line of scrimmage.

Regardless, Vince Williams is a player who brings it all on every down and uses the full force of his physicality to oblige the offense to earn every yard it advances. And the Steleers have made it clear the want to keep that in Pittsburgh for the next four years.