The Pittsburgh Steelers 2018 roster is nearing completion and the choices Mike Tomlin and Kevin Colbert have made balance the teams Super Bowl aspirations with an eye towards sustaining long term success.

The Steelers also cut Nat Berhe, but resigned him after placing Olasunkanmi Adeniyi on injured reserve, which will keep the undrafted free agent rookie out of the lineup for the next two weeks. The Steelers have not made any trades nor have they tried to claim any players on waivers.

That could change as the week evolves but the Steelers 2018 opening day roster is pretty well set. 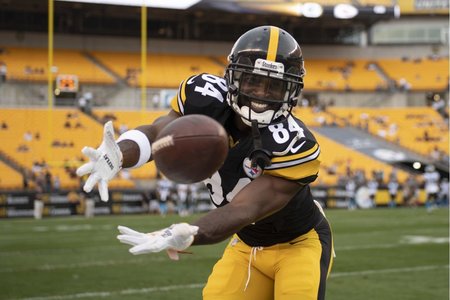 Cutting Landry Jones was a major surprise, and for the first time since 2004, the Pittsburgh Steelers will open the season without a veteran signal caller as their backup quarterback. The Steelers are clearly taking a short-term risk in the name of making a long-term investment.

The elephant in the room’s name is Le’Veon Bell as of Tuesday morning, Bell had not signed his franchise tag nor given any indication as to whether or when he would do so. The Steelers clearly didn’t expect this, as they likely would not have cut Fitzgerald Toussaint. Should Bell stay away, the running back by committee crowd will get its wish.

Antonio Brown all of preseason, supposedly only as a precaution. The Steelers have high hopes for JuJu Smith-Schuster and James Washington while Justin Hunter looked good in preseason. Again. Ryan Switzer is an unknown while Darrius Heyward-Bey is mainly on the roster to play special teams.

Some felt the Steelers would only keep 8 offensive lineman, however Zach Banner made the cut despite joining the team late in the summer. You can never have too many good offensive lineman.

Cam Heyward is officially a “tackle” and Karl Dunbar has brought Daniel McCullers further along than anyone ever expected.

1 year ago the Steelers carried 5 players here. Now they have 3 albeit with one rookie on IR and another on the practice squad. 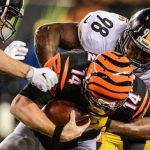 The “battle” between Tyler Matakevich and Jon Bostic never really evolved and Matthew Thomas has insiders privately wondering whether his role can grow as the season evolves. Insight linebacker might not have to be a strength for the Steelers defense in 2018, but it cannot be a liability.

In contrast to quarterback, the Steelers opted for experience over youth, in keeping Coty Sensagaugh over Brian Allen, although Brian Allen remains on the practice squad. For once, the Steelers have strong depth on paper. 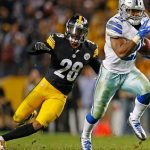 Sean Davis is the only player who returns from 2017 in the entire unit, although Jordan Dangerfield was on IR. The Steelers have invested heavily in this position and for the defense to improve, those investments must deliver.

Jordan Berry did not post pretty preseason numbers, nonetheless, he made the team. Next time you’re in a Steelers bar either A. Ask people “Who is our long snapper” or B. “Who is Kameron Canaday?” No matter which question you ask, here’s 100 Argentine pesos that says 1% of the people you poll have the right answer. Anonymity is a virtue for a long snapper. Let’s hope we don’t hear “Kameron Canaday” until free agency rolls around.

Perhaps conspicuous by his absences was Joshua Fraizer, the Steelers 7th round draft pick. Christian Scotland-Williamson holds a spot thanks to the International Player Pathway. Trey Griffey is of course the son of Ken Griffey Jr. and the grandson of Ken Griffey Sr. Keion Adams and Brian Allen are members of the Steelers 2017 draft class.