The Pittsburgh Steelers opened their 2018 season on the shores of Lake Eire against the Cleveland Browns and came away with… an UGLY 21-21 tie against a team that hadn’t won in over 600 days.

And their response, is understandable — to a point. A tie football game satisfies no one. It’s like grabbing a still warm mug only to have your mouth find lukewarm coffee. While you certainly lose nothing in a tie football game, you fail to gain anything.

While the Steelers 21-21 tie with the Browns is a cause for disappointment, Pittsburgh’s performance provided no shortage of positive plays, and its one legitimate area of concern revolves around quarterback Ben Roethlisberger. 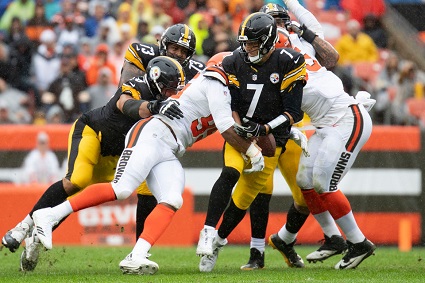 Positive Side of the Tie I – James Conner

One of the key questions facing the Steelers going into the opener was whether they could run the ball effectively while Le’Veon Bell remained AWOL. It was only one game, but James Conner provided a resounding answer in the affirmative.

James Conner hit the holes with authority, proved himself a capable target in the passing game, and scored on two separate occasions. Conner’s second TD came on a 22 yard run where the former Pitt Panther showed excellent instincts and hustle.

James Conner’s fumble certainly counts as a costly mistake, but if his game against the Browns is any indication of what he is capable of for the rest of the season, the retailers at Station Square would be wise to start selling “Le’Veon Who?” T-Shirts.

Positive Side of the Tie in Cleveland II – The Steelers Defense

The Steelers defense entered the game as an even bigger question mark than James Conner.

The last time we saw this unit, the Jacksonville Jaguars were putting up points and racking up yards as if they were the Greatest Show on Turf. The Steelers opened themselves to a lot of criticism for their performance against the Browns.

Thanks to a snafu with DirectTV’s NFL Sunday ticket, I missed the first half of the game. When I saw that Ben Roethlisberger had thrown 3 interceptions, but that the Steelers still held a 7 point lead, my thought was, “Well, the defense must be playing well.”

Then came the first drive of the 2nd half. The Steelers started things off right by sacking T.J. Watt, then let the Browns right back into it with two successive penalties. Before too long, Tyrod Taylor was out juking Bud Dupree and lowering his shoulder against Artie Burns for a touchdown.

Statisticians can make this as fine a point as they want, but when your offense gives up 6 turnovers, you’re not only supposed to lose a game, you’re supposed to lose it badly. The Steelers didn’t lose to the Browns and they can thank their defense for that.

Mike Hilton broke up multiple passes. T.J. Watt recorded four sacks, and looked every bit like a young player blossoming into a dominant one. Cam Heyward, Jon Bostic and Bud Dupree had sacks.

The Steelers defense will face stiffer tests than those offered by the Browns. Cleveland’s tying touchdown came far too easily, but when Cleveland tried to pick on Cam Sutton again, Sutton made them pay the interception that forced over time.

That type of bounce back, paired shut down performance of the Steelers defense during over time offers hope that the arrow is pointed up for Keith Butler’s boys.

As Roethlisberger Goes, So Go the Steelers

The Pittsburgh Steelers failed to win in Cleveland because they committed 6 turnovers. Of those 6, quarterback Ben Roethlisberger turned over the ball 5 times. Two of Ben Roethlisberger’s interceptions in the first half were outright hideous.

After Ben Roethlisberger opened the 2nd half with several lightning strike throws to Antonio Brown and JuJu Smith-Schuster. In little more than the blink of an eye, the Steelers were up 21-7. 247 Pittsburgh writer Jim Wexell offered this observation:

Unfortunately, that wasn’t true. During the 4th quarter Ben Roethlisberger was ineffective and played tentatively during the critical stretch when the quarter was winding down and again in overtime. Worse yet, he coughed up the ball twice.

Neither those turnovers were entirely his fault, but Ben Roethlisberger has made a career of moving around in the pocket making something out of nothing. In the Steelers 21-21 tie with the Browns Ben Roethlisberger was unable to do that.

As Mike Tomlin conceded, the Steelers had opportunities to win, despite the turnovers. Chris Boswell missed a difficult, yet makeable field goal which should have have won the game in over time.  The Steelers defense came up with a key stop after Roethlisberger’s final fumble in regulation, yet the offense could do nothing.

In overtime the defense limited Taylor to 1 completion, forced two punts and the special teams partially blocked a punt and blocked a field goal.

Football is the ultimate team game, and the observations above help show that winning and losing never comes down to the efforts of one player. But the 2018 Pittsburgh Steelers are built around Ben Roethlisberger, and when he is below the line, its very difficult for the rest of the team to pull itself above the line.

Ben Roethlisberger was below the line in the Steelers 21-21 tie with the Browns, and because of that Pittsburgh has already put itself at a disadvantage in the AFC North race.