Like most summers, when I heard the initial hype for inside linebacker Matthew Thomas, a Steelers undrafted rookie free agent out of Florida State, I basically tuned out all of that noise.

After all, how often do OTA and mini-camp “Next James Harrison” or “Next Fast Willie Parker” darlings ever leap off the hype train and onto the moving train that head coach Mike Tomlin calls life in the NFL?

Point made. Besides, it isn’t like the hype for Matthew Thomas was overwhelming. He was just one of those youngsters some fans were hyping up as a player to watch. 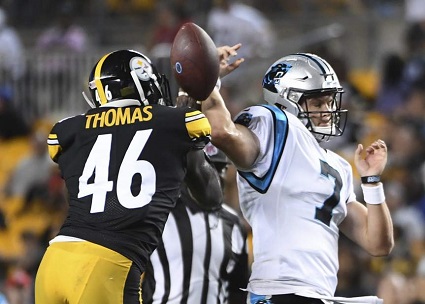 Matthew Thomas was once a highly-touted high school prospect (top-15 nationally, according to his NFL.com draft profile) who had a turbulent college career that included suspensions for off-the-field and academic issues. He was considered your typical raw athlete, someone that could be molded into something spectacular if everything fell the right way.

Through his first two preseason games, you’d didn’t see a whole lot of tangible evidence of Thomas’ potential, despite the many articles praising his play. Sure, he played well, but nothing screamed “Give this kid a roster spot.”

However, the final two exhibition games in-which Matthew Thomas collected a combined 20 tackles and seriously looked like the Steelers’ most-athletic, if not its most gifted inside linebacker.

Thomas’ crowning moment came last Thursday night’s win when he sacked Panthers’ quarterback, Kyle Allen, stripped him of the football, recovered the fumble out of mid-air and then proceeded to race 75 yards downfield–provided more than enough evidence that he would and should make it beyond the final cut.

Now, mere days before the Steelers’ first regular season game against the Browns at Cleveland’s FirstEnergy Stadium this Sunday, there is not only talk of Thomas soon surpassing Tyler Matakevich and L.J. Fort on the depth chart (if he hasn’t already), but of him perhaps being Pittsburgh’s answer to the massive hole that was left at the position when the spectacular Ryan Shazier was lost (probably permanently) due to a spinal injury last December.

That’s certainly a lot of hype, but — and this is obviously just one writer’s opinion — it really does feel like there’s hope at the inside linebacker spot.

Obviously, in-order to combat a lack of athleticism at inside linebacker, you need an athlete. Matthew Thomas is at least that guy.

When they talk, each spring, about Super Bowl contenders such as the Steelers, they say there are only maybe a half-dozen roster spots up for grabs.

Matthew Thomas found a way to grab one of those roster spots, and if he can find a way to reach his full potential, the Steelers may solve their problem at inside linebacker sooner than we think.