Something felt different about the Baltimore Ravens 26-14 defeat of Pittsburgh Steelers at Heinz Field. In terms of 21st century NFL rivalries, Manning vs. Brady may have supplied a lot of sound but Steelers vs. Ravens generated genuine football fury. Consider:

And we forget all of this happened in the same nigh because we remember it as they Troy Polamalu-Joe Flacco strip sacked game. The Steelers-Ravens rivalry was fueled by one thing:

And that’s what made this one feel different. The Ravens didn’t necessarily assert their AFC North superiority — Cincinnati’s still leads the division — but Baltimore laid bare the 2018 Pittsburgh Steelers mediocrity for all the world to see. 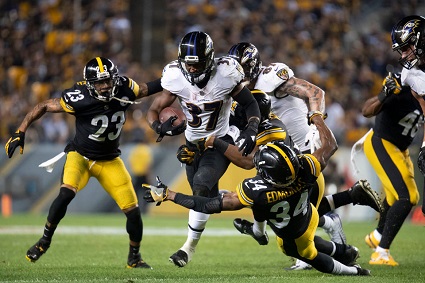 It is still too early in September to draw conclusions in the NFL calendar, but team’s tendencies do become clear by the end of the month. And four weeks into the season the 2018 Pittsburgh Steelers have their script down pat:

The game ends alternatively as a player like T.J. Watt or James Conner makes a dramatic dramatics that keep the Steelers from losing, OR the Steelers defensive front seven, which features 3 number 1 picks, 1 number 2 pick and a number 3 pick, gets abused by a running back on a play when EVERYONE knows is coming.

The 2018 Pittsburgh Steelers follow a pattern, and they follow it well. And Pittsburgh would be in business if could convince Roger Goodell fashion a sort of pro football equivalent of a Fabulous Freebirds Rule (Google it) declaring that the Steelers only need keep score for the 2nd and 3rd quarters.

Alas, the game of football is still played for 60 minutes, and the Pittsburgh Steelers have been outscored 76 to 15 in the first and fourth quarters.

Yet, if the Steelers have followed a script thus far in 2018, Ben Roethlisberger has not.

As the Steelers strong performances in the 2nd quarter suggest, Ben Roethlisberger hasn’t “lost it.” He’s still capable of making every throw he needs to make, he can still work the two minute drill, he isn’t playing with a compulsion to force the ball, and he can still make good decisions.

True, he is more out of sync with Antonio Brown than anyone else, but last night saw a second half in which Roethlisberger misfired to JuJu Smith-Schuster, James Washington, Jesse James and Ryan Switzer on numerous occasions.

Mike Tomlin had better figure out the answer, because the Steelers need Ben Roethlisberger to carry them. Four games into 2018 the Steelers now know that they have a good NFL running back in James Conner. Steelers fans can now also see the difference between a good NFL running back, and a great, Hall of Fame Caliber talent in Le’Veon Bell (who, by the way reminds us he still wants to retire a Steeler – thanks Le’Veon).

Fantasy football owners who started the Steelers for team defense very well may be happen this week. After all, in 2018 holding an opponent to 19 non-turnover assisted points is often times more than enough. And on paper, Keith Butler’s defense made some other improvements:

Yet neither they, nor anyone else did. Worse yet, no one watching the game would have felt the Steelers defense was capable of making a game-changing play.

Can the Steelers Salvage Something of 2018?

The quarter pole of the 2018 season finds the Pittsburgh Steelers at 1-2-1 and mired deep in mediocrity. If Ben Roethlisberger find a way to play well for more than just the 2nd and 3rd quarter, the Steelers could compete with a lot of teams. Maybe.

If Mike Tomlin and Keith Butler could could find a way to both pressure the passer AND not leave gaping holes in their secondary, the defense could play well enough not to require transforming each game into a shoot out. Maybe.

If the special teams could set up and make a play ever now and then, it would take some heat off of offense and defense. Maybe.

That’s a lot of maybes. And teams that depend on “maybes” heading into October are by definition mediocre ones. That’s who the Pittsburgh Steelers are right now.