One doesn’t need a Ph.D. in football to know that the Steelers defense needed someone to step up in a big way heading into their 41-17 win over the Atlanta Falcons. Several Steelers defenders did indeed step up, and perhaps we have Tony Defeo to thank for the defender who made the biggest bang. 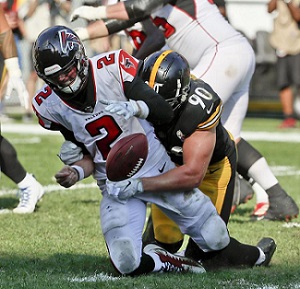 Writing on Behind the Steel Curtain, Tony Defeo made a simple statement, but one strong enough to merit a game day Retweet:

Its time for T.J. Watt to step up and be the player the #Steelers drafted him to be: https://t.co/7FqCtYeTKo

And just like that, T.J. Watt delivered, leading the Steelers in tackles, tackling 5 players behind the line of scrimmage, hitting Matt Ryan 4 times, and sacking him 3 times, including a forced fumble which L.J. Fort recovered in the end zone for a game clinching touchdown.

Articles like that remind me of the days back at the legendary Purple Goose Saloon, where I’d jaw with buddies Mike and Todd.

“Bill Cowher needs to use Chris Fuamatu-Ma’afala to give Jerome Bettis a breather, and while he’s at it, they need to throw more to Mark Bruener, especially when they’re in the Red Zone….”

Then one of us would quip “Yep, and we’ll tell him you said that the next time we see him!”

We can’t . But it’s nonetheless a little uncanny that our beloved Defeoman would see such a demand transformed into reality in such dramatic fashion. In the event that Tony’s DOES have some sort of mystical connection allows such wishes to be granted, here are a few to add to his bucket:

This list is just for starters. Feel free to add yours, although be judicious because Tony must wield his power wisely….