Taken from the grade book of a teacher wondering whether he’s just seen another momentary upward blip from his star students or a true ascent towards realizing their potential, here is the Pittsburgh Steelers Report Card for the win over the New England Patriots. 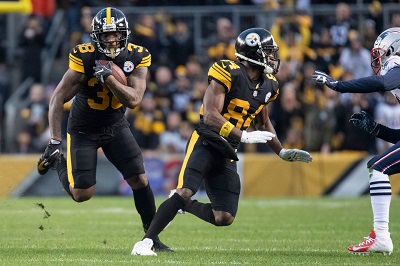 Quarterback
For the Steelers to prevail in a Brady vs Ben duel, one would think that Ben Roethlisberger would need to have one of his best days as a pro. Yet, Fantasy owners who started Ben Roethlisberger likely regretted it, as Ben’s overall numbers were pedestrian. The truth is that Ben didn’t have a banner day against the Patriots, but he made the throws the Steelers needed him to make to win. Grade: B

Running Backs
Stevan Ridley’s revenge ambitions drew attention going into this game and Ridley did an excellent job of getting the Steelers out of danger with his 12 yard run from Pittsburgh’s one. However, the real star of the show was Jaylen Samuels who rushed for 142 yards on 19 carries and displayed incredible instincts by staying in bounds late in the game. Roosevelt Nix wasn’t used often, but as usual he was effective. Grade: A

Tight Ends
Vance McDonald scored the Steelers first touchdown and forced his way to extra yards to earn a third down on the Steelers final scoring drive. Jesse James had one catch for 9 yards. Grade: B+

Wide Receivers
Antonio Brown caught the Steelers second touchdown, which JuJu Smith-Schuster help set up with two electrifying catches, and Eli Rogers made his presence known with a couple of key 3rd down conversions. But the real star of the show was James Washington who led the Steelers in both catches and yards and for the first time looked like he really belonged. Grade: A

Offensive Line
The Patriots got more pressure on Ben Roethlisberger than has been the norm this season, but the offensive line provided pass protection when it was needed the most, and Alejandro Villanueva’s block on the second touchdown serves as a great example. But the line’s biggest contribution to the win came in the run blocking it provided as it almost seemed to have symbiotic relationship with Jaylen Samuels. Grade: B+

Defensive Line
The Patriots had some success running the ball, but the Steelers also limited them at key moments in the game. Likewise, while the sack numbers weren’t there, the QB pressures were and a good number of those plays were made by the defensive line, as evidenced by Stephon Tuitt’s 2 QB hits. Grade: A-

Linebackers
In statistical terms,it was largely a quiet day for the Steelers linebackers, although Vince Williams and Anthony Chickillo had success in dropping ball carriers behind the line of scrimmage. Patriot rushers made it to the second level a number of times, but they didn’t get far when they did, and the Steelers linebackers deserve a lot of credit for that. Grade: A- 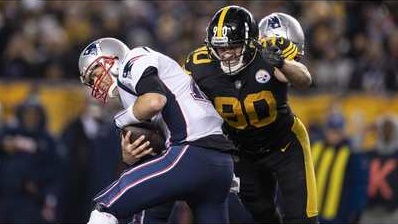 Secondary
Where to start? Play-by-play stats would appear to indicate that Terrell Edmunds and Morgan Burnett handled the bulk of the duties when it came to shutting down Rob Gronkowski and the number show that the duo delivered. Those same stats also show that Coty Sensabaugh did his part to shut down the Patriots.

Mike Hilton came in second in the team on tackles, behind Joe Haden, who snatched a throw way jump ball from the air to stop the Patriots cold and get the ball back for the Steelers. The unit did give up an easy touchdown, which brings their grade down, albeit slightly. Grade: A-

Special Teams
Ryan Switzer had one return for 27 yards. Jordan Berry did not have any returnable punts, and the Steelers attempted no returns. Chris Boswell missed another field goal, but unlike last week, he redeemed himself with a 48 yarder – no small feat at Heinz Field. Grade: C

Coaching
Honesty check: If I’d told you one team would have 14 penalties called on it and the other 4, you’d have guessed the Steelers self-destructed with penalties, again. No worries, I’d have said the same. But it was the Patriots who kept scuttling their own drives with penalties.

Unlike one week ago, Randy Fichnter appears to have gone into the game intent on establishing the run, and he deserves credit for designing plays that maximized Jaylen Samuels unique skill set. The Steelers lined up regularly with empty sets, but still ended up with well over 100 yards rushing.

More importantly, when the coaching staff saw that Samuels could move the ball, they gave him more opportunities to do so which was a difference maker in the game.

The Patriots reached the Red Zone as time was about to expire, but unlike previous weeks, the Steelers defense delivered.

While momentum is often oversold in today’s NFL, losing, particularly in December, can have a snowball effect. The Steelers had lost three tough games and things could have easily spun out of control. Yet Tomlin got his team to stay focused on the Patriots, and doubled down on his investment of trust in his players, which in turn fostered trust within the locker room. The results speak for themselves. Grade: A

Unsung Hero Award
Normally a 1 sack performance indicates a putrid pass rush. Yet the Steelers got in Tom Brady’s face early and often, and while they only brought him down once, they flushed him from the pocket numerous times and forced him to rush his throw.

While the entire Steelers defense deserves credit for this achievement, Tom Brady’s to biggest antagonizes were T.J. Watt and Cam Heyward and, for that, they win the Unsung Hero Award for the Steelers win over the Patriots at Heinz Field.