Art Rooney II spoke with Gerry Dulac of the Pittsburgh Post Gazette on the Antonio Brown situation, and while the Steelers President didn’t close the door on Antonio Brown remaining in Pittsburgh, he left little doubt about which way that door was swinging. 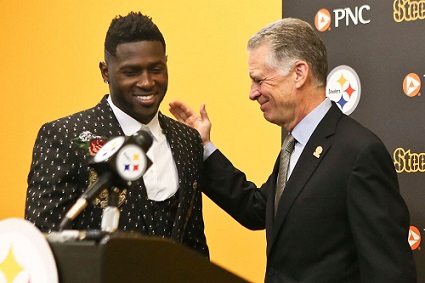 Art Rooney II made it clear the Steelers were not going to release Antonio Brown outright, but he also clarified that the team would not be hamstrung by the salary cap implications of trading him. But perhaps his most telling quote came when Dulac asked him about Brown coming to St. Vincents:

Asked if it would be hard or easy to envision Brown being at training camp in Latrobe, Rooney said, ‘As we sit here today, it’s hard to envision that. But there’s no sense on closing the door on anything today. There’s snow on the ground. We don’t have to make those decisions right now.’

Mind you, this came from a man who once wrote off Antonio Brown’s “Facebook Live” incident as a “minor annoyance.”

None of this is surprising. When asked if Antonio Brown quit on his team, Steelers head coach Mike Tomlin offered no objections. And for those savvy enough to decode press reports, it is pretty clear that the Steelers are open to trading Antonio Brown.

Abandoning your teammates is not a trivial offense. The Steelers cut LeGarrette Blount outright when he walked off the field during the Steelers 2014 win over the Tennessee Titans when coaches indicated that Le’Veon Bell would remain in the game. While the situation was a little different, James Harrison did the same in 2017 and the Steelers cut him at Christmas.

Ben Roethlisberger has spoken publicly about the incident, denied any friction between him and Brown in an effort to remain open to Brown coming back. Cam Heyward said he wanted Brown to remain a Steeler, but also made clear that Brown’s behavior is unacceptable. Fair enough, but while Roethlisberger and Heyward’s opinions count, neither man has decision-making authority.

Art Rooney does, and he’s made clear he’s ready to use it.

This might be overthinking things, but if working closely with sales representatives who put together multi-million dollar deals has taught me anything, it is to never let on how much you want to buy or sell.

But being open to trading someone and wanting to ship someone out are two different things. Scarcity creates demand, and if the Steelers are seen as wanting to trade Brown, then it could make it harder to get fair value for him.

Martavis Bryant, despite under performing, despite the Steelers having stood by him through various suspensions, wasn’t happy to have to compete with JuJu Smith-Schuster for playing time, and demanded “I want mines.” He then took to Twitter to demand a trade. The Steelers stood firm and refused to entertain offers.

Martavis was never offered in a trade. Teams have inquired about his availability. Because of media reports, we’ve quickly dismissed that and said he’s not available.

And then of course during the 2018 NFL Draft, the Steelers turned around and traded Martavis Bryant to the Oakland Raiders for a 3rd round pick, and used it to draft Mason Rudolph. Why did the Steelers change their mind?

Because Jon Gruden knew Pittsburgh wanted to keep Martavis Bryant, he offered them a deal that was too good to turn down.

What Martavis Bryant did in 2017 was out of line; Antonio Brown turned his back on his teammates in their “darkest hour,” and then had the nerve to test his coach by showing up and trying to force him to play him.

A year ago saying that Bryant wasn’t available via trade was simply saying, “We have a guy on a rookie contract who we think can still contribute.”

In contrast, imagine if Art Rooney II had said something like, “Obviously, this is a serious situation, but Antonio is part of the Steelers family. And you know how the saying goes, you praise you family in public, and admonish them in private. We’ll take care of things in house.” He’d have made himself look weak to the rest of the league. Worse yet, he’d have revealed himself as weak to the entire organization.

That’s the right posture to take. Hopefully his public stance won’t compromise the Steelers ability to demand trade terms that deliver fair value for shipping out a Hall of Fame talent out of Pittsburgh.