Taken from the grade book of a teacher who is pondering over how to deal with a star pupil who has an attitude problem, here is the Pittsburgh Steelers Report Card for the win over the Bengals.

Quarterback
Ben Roethlisberger went 31 of 45 for one touchdown and one interception. Ben apparently thought the interception should have gone back due to an uncalled off sides penalty, but at this point he should know better than to count on getting correct calls. Ben Roethlisberger was out of sorts until mid-way through the 3rd quarter. Grade: C-

Running Backs
James Conner looked sharp in his first game back since the injury against the Chargers, but he only got 14 carries as the offense never was able to establish the run. Jaylen Samuels got little on his lone carry, but did catch 7 of 8 passes thrown his way. Grade: B

Tight Ends
Vance McDonald caught 3 passes including a two that converted 3rd downs. Xavier Grimble had 1 catch that helped move the Steelers into scoring position prior to the half. Jesse James had one target he failed to catch, but threw some nice blocks. Grade: B

Wide Receivers
Absent Antonio Brown the Steelers wide outs struggled to find their footing, as JuJu Smith-Schuster dropped a pass early that he should have caught. James Washington had one nice 45 yard catch showing his maturity, but he was hardly a game breaker. Ryan Switzer had one catch for 2 yards. Grade: C-

Offensive Line
The Bengals, for all their flaws, have a good defensive line. But the Steelers have played them before, yet struggled to protect their quarterback or open the lanes for running backs as needed. Instead of winning the battle of scrimmage, the Steelers offense essentially fought to a draw. Grade: C-

Defensive Line
Cam Heyward led the unit with 2 sacks and dropped two players behind the line of scrimmage, while Stephon Tuitt had a half sack and defensed a pass. Javon Hargrave had 4 tackles. The defense delivered the plays needed to win the game and it started with the line. Although Joe Mixon’s strong performance drops this group’s grade a big. Grade: B+

Linebackers
T.J. Watt had a strip sack and forced another fumble. L.J. Fort led the team in tackles. Bud Dupree had a quarterback hit while Anthony Chickillo split a sack with Stephon Tuitt. Overall a strong performance by the linebackers, but this group too shoulders some blame for the long Joe Mixon run that got the Bengals back into the game. Grade: B+ 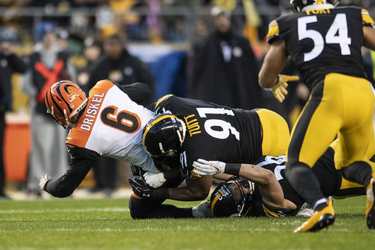 Special Teams
Matt McCrane made both of his field goals, including 39 and 47 yarders – no gimmes at Heinz Field in December, let alone for a rookie. Ryan Switzer had some decent returns, but this unit continues to give up penalties, which has been a chronic weakness all season not to mention in previous seasons. That brings the grade down. Grade: C+

Coaching
Whatever his fate is Keith Butler’s did a fine job against the Bengals. The Steelers defense limited the Bengals to two field goals, which is all the more impressive considering how anemic the Steelers offense was for the vast majority of the game.

Sure, the Steelers defense could have secured a turnover, but the fact that they forced two fumbles and didn’t recover either reinforces reality that the ball really hasn’t bounced the Steelers way this season.

Still, it is Randy Fichtner’s job to devise a game plan his players can execute to exploit the weaknesses of the opponent. Even without Antonio Brown, the Steelers offense has more talent than the Bengals defense, yet the offense sputtered for much of the afternoon.

Mike Tomlin clearly had a locker room disruption to deal with during the week and while he made the right decision in benching Antonio Brown, the fact that Brown showed up expecting to play after missing the bulk of practice indicates that Tomlin could have handled it differently.

So instead of beating up on an opponent who should have wanted nothing more to do than to get into the bus and head west on I-70, the Steelers ended up taking the game to the wire. No, there are no style points added to this win, but the victory inspired zero confidence that the Steelers could have been a threat in the playoffs had they gotten help. Grade: C-

Unsung Hero Award
He’s been back for less than a month, but he quickly inserted himself into this offense and gave it what it has been lacking all season long – a true 3rd down wide receiver. Ben Roethlisberger looked to him a number of times and when he did, Eli Rogers delivered, winning him the Unsung Hero Award for the win over the Bengals.