As Kevin Colbert announced yesterday, the Pittsburgh Steelers have decided not to apply the transition tag or the franchise tag on Le’Veon Bell. The move comes as a bit of a surprise because the Steelers had seemed intent on playing hard ball with Bell.

They have chosen not to, and that decision might signal that Art Rooney II has mastered one of the one of the most important tests of his tenure as Steelers president. 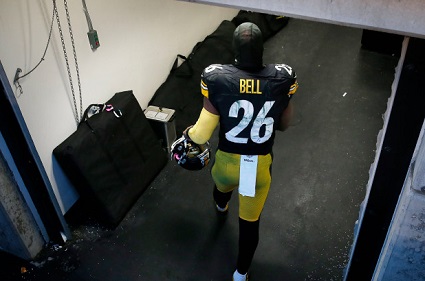 Here’s the digest version based on our 2017 and 2018 free-agent profiles of Le’Veon Bell.

In his rookie training camp, Ed Bouchette boldly compared Le’Veon Bell’s debut to that of Franco Harris. Journalists such as John Stiegerwald were skeptical, yet Jim Wexell tracked Bell’s rookie performance against Walter Peyton’s as a rookie.

A lot of signs indicate yes, however the fact that Bell has played only one complete season and been hit with two suspensions raises doubts.

The (Theoretical Case) for the Steelers Retaining Le’Veon Bell

The Steelers decision seems clear, but the point of this exercise is to make the strongest case possible for keeping Bell so here goes.

No one inside or outside of Pittsburgh questions Le’Veon Bell’s talent and his ability to perform at peak level at least in the short term. With James Conners and Jaylen Samuels on the roster, bringing Bell back would give Pittsburgh a more potent running back tandem than the Willie Parker/Rashard Mendenhall duo they envisioned in early 2008 (with Samuels standing in for Mewelde Moore.)

As one Steelers scribe privately remarked when Bell’s 2018 holdout became permanent, “It would basically dare any other NFL team to improve on the offer the Steelers made last season.” It would also give the Steelers the chance to match that offer. Theoretically, the Steelers could also match the offer and then trade him to someone else.

And a trade could bring the Steelers a pick in the 2019 NFL Draft whereas any compensatory pick would only come in 2020. With a strike or lockout looming, a draft pick in 2019 helps the Steelers far more than one in 2020.

The Steelers were prepared to commit an eight-figure salary cap to Le’Veon Bell in offers made in 2017 and 2018. Yet, James Conner delivered excellent production (although not ball security) in 2018 and he’ll only make $844,572 in 2019.

Beyond salary cap dollars and sense, not having Le’Veon Bell probably cost the 2018 Steelers the playoffs. Bell’s behavior and the gap between his actions and words widened in 2018. Do the Steelers need another potential locker room distraction? Ah, no.

First, the transition tag ties up valuable salary cap dollars that can’t be used while the Bell situation sorts itself out. Forget Bell signing his tender so that the Steelers can trade him. The Steelers could try to “match and trade” but would need to complete the trade on the same day to avoid a salary cap hit.

Finally, if the Steelers tag Bell then decline to match, they get nothing.

During the 1990’s, it often felt like the Steelers served as the NFL’s farm team. Pittsburgh would develop players like Chad Brown or Yancey Thigpen only to see them leave as free agents. The Rooneys promised things would change with a new stadium. Heinz Field opened in 2001, and since then the Steelers have done a remarkable job of keeping their own players since then.

For a long time it seemed like Art Rooney II and the rest of the Steelers brass was determined to use the transition tag to exert some control over Le’Veon Bell’s fate. While that’s understandable, it doesn’t make sound football sense.

In a perfect world, Le’Veon Bell would have signed the deal his agent had agreed to with the Steelers. But Bell declined. The Steelers gave it a second go around, and Bell sat out all of 2018 while trolling his team at every chance he got.

The Steelers are going to let Le’Veon Bell walk and that is the right decision.