However, Jesse James authored the most pivotal and controversial play of the Steelers post-Super Bowl XLV rebuilding phase.

And it is paradoxically unfortunate and appropriate that Pittsburgh will remember Jesse James for that one play. 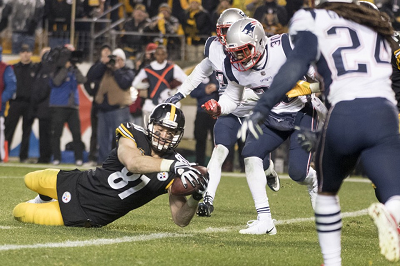 It is unfortunate because instant replay robbed Jesse James of what would have been one of the most sensational touchdowns in Steelers regular season history. It is appropriate because had it worked, the play would have perfectly embodied the type of player Jesse James was for the Steelers.

Let’s go back to that fateful day. The Steelers, with a Ryan Shazierless defense and with Antonio Brown injured, had actually led the Patriots for most of the game, until Brady-to-Gronk decimated Pittsburgh in the 4th quarter. All hope appeared lost until JuJu Smith-Schuster transformed a sideline pass into a 69 yard gain that brought the Steelers to the New England 10 with 34 seconds left to go.

It is hard to know who were Ben Roethlisberger’s primary reads on this play. Ben looks and pumps towards Darrius Heyward-Bey but that could have been an intentional fake. JuJu Smith-Schuster could have been his primary receiver, but he was covered. So instead he looked to Jesse James.

Because by that point in his career, Jesse James had developed himself into a dependable receiver who delivered catches when they counted. For those tempted to roll their eyes, take a look at the numbers.

Jesse James stats with the Steelers

Running backs and tight ends catch percentages tend to be higher than receivers because they’re catching higher percentage passes closer to the line of scrimmage. But Jesse James’ catch percentage trended up in Pittsburgh even as did the length of his average reception. In other words, Jesse James no stats compiler who benefited from check down passes.

Both Kordell Stewart and Neil O’Donnell have higher passer ratings than Terry Bradshaw. Anyone want to take either of those over the Blonde Bomber in an all-time Steelers draft? Nope, I didn’t think so. In terms of tight ends, a high catch percentage doesn’t mean much if you drop the ball when the game is on the line (just ask Bert Jones of Super Bowl XIII fame). While he didn’t get a lot of attention for it, Jesse James delivered.

I wanted to see Jesse James stay in the Black and Gold. But Kevin Colbert made it pretty clear the Steelers weren’t going to offer Jesse James the kind of money he thought he could get on the open market.

Good for him. For as much of quality, under the radar player Jesse James evolved into for the Steelers, Vance McDonald is a much more dynamic player, and a true offensive weapon. The Steelers made the right decision in terms cost-benefit trade off by declining to match the Detroit Lion’s offer.

But that doesn’t change the fact that Jesse James Steelers career deserves to be remember for the quiet dependability he delivered when the game was on the line, not for the play instant replay said he didn’t make over the Patriots.

Good luck in Detroit Jesse James. Steelers Nation will be rooting for your success – as long as it doesn’t come at Pittsburgh’s expense.