If Steelers Nation hoped that the Antonio Brown soap opera would end with Pittsburgh trading Brown to Oakland for 3rd and 5th round picks in the 2019 NFL Draft, they hoped in vain. Antonio Brown has kept the story alive, complete with released tapes of conversations between him and Drew Rosenhaus.

Outrage was the first reaction when news of Antonio Brown quitting on the Steelers before the season finale broke. Criticism of Mike Tomlin for creating this monster by empowering Brown because he didn’t run a tight enough ship followed.

As it became clear that the Steelers would trade Antonio Brown, the national media became more involved. Then Brown started ranting about “no more unguarantees.” 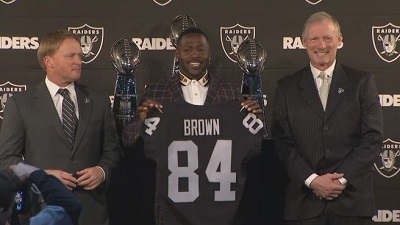 “Unguarantees” shifted the slant of the story towards money. Brown’s motive, as many national and even Pittsburgh reporters concluded, was about money from day one.

In an article published on Thursday March 28th, Frank Schwab expanded on Jeremy Fowler’s story that discussed concern around the NFL that the Steelers had set a bad precedent by trading Antonio Brown.

Schwab’s tone is unmistakable from the outset: “The NFL doesn’t like when players have power.”
Schwab continues:

There are some concerning aspects to how Brown forced himself out of Pittsburgh, but this part is also disingenuous: League sources told Fowler they’re worried what Brown did is “‘dangerous’ for teams expecting players to honor contracts.” From a league that drops players with millions in non-guaranteed money left on their contracts over and over and over and over, the lack of self-awareness about crying over players not honoring deals is rich. Once the NFL honors most of its contracts, or doesn’t fight against guaranteed deals in labor negotiations, it can complain about players who don’t do the same. [Emphasis added.]

And viola you have it! Antonio Brown is now supposed to be some sort of poster boy for cause of guaranteed contracts in the NFL.

Before answering this question, what are the “concerning aspects to how Brown forced himself out of Pittsburgh,” that Schwab eludes to? For those who have short memories, let’s review:

This came after the Steelers made Antonio Brown the NFL’s highest paid receiver in 2017 (we’ll get to the guaranteed money below) and after Ben Roethlisberger targeted him more times than any other NFL receiver in 2019.

Since he went AWOL at the end of the season, Antonio Brown has been the walking embodiment of narcissism. Oh, but ladies and gentleman, trust us on this one, if Art Rooney II had guaranteed his contract, none of this would have happened.

#Pittsburgh's Clemente Bridge from the North Shore amidst freshly fallen snow. Brought to you as only @DaveDiCello can.pic.twitter.com/TJEafbtaBd

Yeah, and if you believe that, I can get you a really good price on Pittsburgh’s Roberto Clemente bridge. I’ll sweeten the deal even more if you can give me cash up front…..

To be fair to Frank Schwab, later on in his article he makes it clear that he does not condone Antonio Brown’s conduct. But it is ironic that in trying to use Antonio Brown as a character in some sort of David and Goliath story about guaranteed NFL contracts he’s hurting his cause.

The Steelers Stand by Their Word

“Guaranteed money is a term that has been thrown around a lot as the Antonio Brown and Le’Veon Bell stories have evolved. The Steelers stance of only guaranteeing the signing bonus and the first year of a contract has been savaged by the national press from about every angle possible.

NFL capologist Ian Whetstone has calculated that the Steelers pay 88% of their second contracts to home grown players.

You will read a lot of variations today on how Le’Veon Bell lost his contractual gambit, most of it exaggerated. But here is what he really lost: he turned down lucrative long term offers from a club that, on average, pays out 88% of the total value of second contracts 1/

Moreover, percentage remains in the mid 70’s for Steelers 3rd and 4th contracts.

That should put to rest any notion that Antonio Brown “had” to resort to such childish antics to secure financial security. Those who wish to root for Antonio Brown continue to excel as a Hall of Fame talent in Oakland are free to do so.

But please, do not us the disservice of portraying Antonio Brown as a victim.

2 thoughts on “Steelers Nation to Rest of NFL: Antonio Brown is NOT a Victim”