As the hits keep coming in Pittsburgh former Steelers are not only sound off, but also changing their tunes. Recent comments by Emmanuel Sanders and James Harrison lending insight into the impact that context can have on memory.

But last week the wide receiver that the Steelers took in the 3rd round of the 2010 NFL Draft, joined to national pile on of Pittsburgh, this time taking aim at Kevin Colbert. Speaking on Denver’s 104.3 The Fan, Sanders called out Kevin Colbert for rebuffing his contract claims by asking “‘Who do you think you are, Antonio Brown?’”

That’s a bit odd, because just before the Steelers infamous loss to the Denver Broncos last fall, Sanders confided in the Tribune-Review’s John Grupp that he’d been in Denver so long that, “I forget about my Pittsburgh days.” 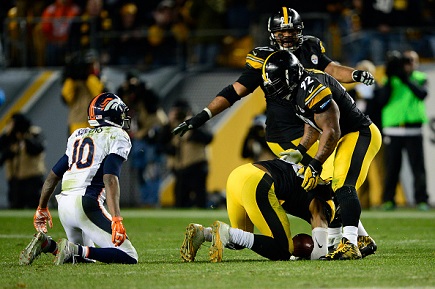 Now, to keep Sanders’ quote in context, he further clarified, “I still remember the days there.” He also confided that Steelers coach Mike Tomlin said that the team wanted to keep him, but didn’t have the money. Tomlin, Sanders made it clear, wished him well. That’s important to remember.

Because both Pro Football Talk’s Michael David Smith and Peter King put this into the context of an either/or situation between Antonio Brown and Emmanuel Sanders. That makes sense because they were both drafted in the 2010 NFL Draft, but a little bit of research will reveal that the Steelers gave Antonio Brown his 2nd contract in 2012, whereas Emmanuel Sanders didn’t become a free agent until two years later.

If this were a Watch Tower column, and it is not, the we’d now take Smith and King to task for either ignoring context with contradicts Sanders’ claim and/or implying a backstory that doesn’t match the facts.

The larger point is, that when Sanders first recalled his time in Pittsburgh, the Steelers were riding on a 6 game winning streak. Antonio Brown’s antics had been largely forgotten, and Le’Veon Bell’s hold out had become permanent. And people weren’t piling on Pittsburgh.

That might be overly harsh. Perhaps it is. Emanuel Sanders has been an objective voice when asked about issues relating to Ben Roethlisberger and Antonio Brown. He very well may remember his interaction with Kevin Colbert that way.

But we’ve all been in situation when everyone is coming down on someone else, and we’ve all known how easy it is to join in.

When asked about Ben Roethlisberger by Colin Cowherd, never one to be confused as a Steelers apologist, James Harrison surprised everyone by praising Ben Roethlisberger: “The people that are saying he’s a bad teammate, that’s their truth. For me, I think Ben is a good teammate and a good leader.”

Wow! What a difference 8 years makes. Back in the summer of 2011, Men’s Journal writer Paul Solotaroff did a feature length article on James Harrison. In the article, James Harrison didn’t mince words about some of his teammates, including Ben Roethlisberger, as Harrison told Solotaroff:

Hey, at least throw a pick on their side of the field instead of asking the D to bail you out again. Or hand the ball off and stop trying to act like Peyton Manning. You ain’t that and you know it, man; you just get paid like he does.

In subsequent radio interviews, implied that those comments were only the tip of the iceberg in terms of Harrison’s feelings about Ben Roethlisberger. Why the change? Who knows? Since 2011 Ben Roethlisberger has, in many ways, taken the team on its back and been the primary person responsible for the 8 non-losing seasons the Steelers have enjoyed since then.

He’s also become a better, more refined quarterback (thanks in no small part to Todd Haley, although commentators and most likely Roethlisberger himself would be loathe to admit it.)

Could this be a turning point in James Harrison’s relationship with the Steelers? Time will tell. But with everyone piling on Pittsburgh, James Harrison is deciding not to take part. Good for him.