In the end, the Steelers got their Devin.

Since the 2018 season ended, word is that the Steelers wanted one of the Devins either Devin White or Devin Bush in the 2019 NFL Draft. Devin White went 5th and with the way the 1st round was unfolding there was no way the David Bush was going to fall to the Steelers at 20.

This time Kevin Colbert wasn’t going to let that happen, and he swapped the Steelers 20th round pick for the Denver Bronco’s 10th pick, along with the Steelers 2019 second round pick and a third rounder in 2020. 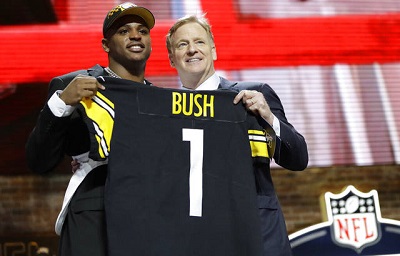 Mike Tomlin characterized Devin Bush as an “Exciting, all situations linebacker,” praising the rookie for his pass rush and coverage ability. Devin Bush brings tremendous athleticism to Pittsburgh, having run the 40 in 4.43, which is the type of speed that the Steelers have been missing since they lost Ryan Shazier.

Indeed, in talking with Pittsburgh area reporters, the inevitable comparison to Ryan Shazier came up. Bush responded “I feel like Ryan Shazier is a great player. Still is,” Bush said. “I hope to see him soon and wish all the best for Ryan Shazier in his recovery. I know he’s going to do well. … He will be back.”

When asked to compare himself to Shazier, Bush declined offering, “I’m ready to be Devin Bush,” he said. “I’m not trying to compare myself to Ryan Shazier or anybody else,” according to Joe Rutter of the Tribune-Review.

Any good NFL draft prospect is going to have his YouTube highlights package, and Devin Bush is no exception.

You can see why the Steelers were excited to bring Devin Bush to Pittsburgh.