Kevin Colbert swears that he never, ever drafts for need. “Ni en pedo” is what he would swear where he an Argentine porteño.

Using their own 3rd round pick in the 2019 NFL Draft, the Pittsburgh Steelers looked to Justin Layne, cornerback from Michigan State. Justin Layne grew up in Cleveland as the son of a devoted Browns fan, but as Jim Wexell reports, he has already clarified that “Man, my dad threw away all his Browns stuff.” 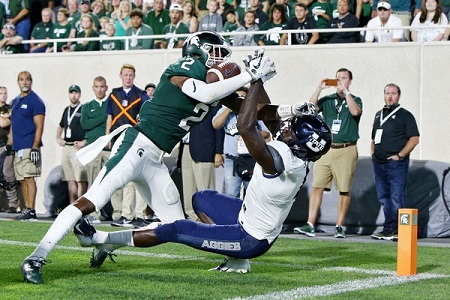 Justin Lanye’s past family ties with the Brown can and should be forgiven. After all Chuck Noll was a former Cleveland Brown player and Justin Layne is a graduate of Benedictine High in Cleveland as was Chuck Noll.

As Steel City Insider’s Jim Wexell reminds us, Brian Layne actually began his career for the Michigan State Spartans playing wide receiver, not switching until midway through the 2016 season when he took an interception 43 yards for a touchdown in his first game as corner.

Perhaps with experience on the other side, Justin Layne can break the mold, as he make 3 more interceptions and broke up 24 passes (while interceptions are coveted, passes defensed is often viewed as the better key performance indicator by secondary coaches.)

If some were quick to say that the Steeler reached for their first 3rd round pick, wide receiver Diontae Johnson, people just as quickly asked why someone of Justin Layne’s pedigree was still on the board so late in the third round.

Justin Layne’s measurable are solid. He stands just under 6’2” ran 4.5 in the 40, has a 37.5 vertical jump and has strong agility times running a 4.09 shuttle and a 6.9 3-cone. He also has 33 inch arms. New Steelers defensive assistant Teryl Austin was asked of Layne had a flaw in his game and retorted, “I’m not sure what the flaw is.”

Here’s a look at Layne’s tape:

His ball skills are evident and Justin Layne appears to be a solid tackler. The question of how and where Justin Layne will fit into the Steelers secondary will be an interesting one. When asked if he would play in the slot, which would make him an immediate threat to Mike Hilton, Teryl Austin countered by saying he saw Layne as more of an outside corner.

Joe Haden and Steven Nelson‘s status as the Steelers starting cornerbacks would not appear to be disrupted by Justin Layne’s arrival in Pittsburgh. However, it likely decreases any chance that the Steelers resign 2018’s starter Coty Sensabaugh.