The Steelers cut Matt McCrane and former AAF defensive back Jack Tocho yesterday to get into compliance with the NFL’s mandated 90 man roster limit. In doing so, they cleared up a minor mystery that came along with the signing of their 2019 Undrafted Rookie Free Agent class. 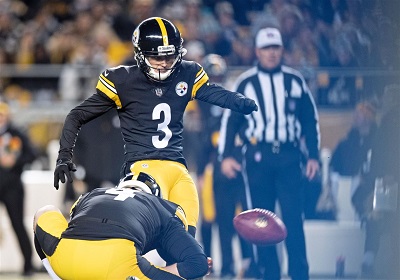 In the blink of an eye, Chris Boswell went from being one of the NFL’s most accurate and dependable clutch kickers to a kicker who struggled to make extra points. Boswell’s botched kick against Oakland cost the Steelers a much needed win and contributed to the loss against Kansas City.

While both Mike Tomlin and Kevin Colbert have expressed their confidence in Chris Boswell, they’ve also made it clear that Chris Boswell will face competition during training camp this summer at St. Vincents. And Mike Tomlin went out of his way to praise Matt McCrane efforts in the win over the Bengals at his post-season press conference.

However, the Steelers decision to sign place kicker Matthew Wright, kicker out of Central Florida following the 2019 NFL Draft was a bit of an eyebrow raiser. NFL teams routinely bring in extra kickers and punters to training camp, even when there is no real competition, to lessen the load on their starters.

And unfortunately, for Matt McCrane, he was the odd man out. That should not be terribly surprising. As noted when the Steelers signed Matt McCrane, his career stats were about what you’d expect of an NFL place kicker who was unemployed in late December.

And as an undrafted rookie free agent, Matthew Wright is going to come cheaper that Matt McCrane. For the record, Matthew Wright made 210 of 213 extra point attempts at Central Florida, but his field goal percentage was only 77.5%, although he did make 85% of his kicks during his senior year.

A 77.5% field goal completion rate sounds rather pedestrian, but Chris Boswell only knocked in 73.9% of his kicks while at Rice.