The Steelers drafts of the mid-’70s-to-mid-’80s never came close to producing the same legendary results as the ones from 1969-1974, when head coach Chuck Noll and his scouting staff that included lead scout–and son of team owner Art Sr.– Art Rooney Jr. selected nine future Hall of Fame players.

When it came to Rich Erenberg, a running back Pittsburgh selected in the ninth round of the 1984 NFL Draft……well, he was no exception.

According to his Wikipedia page, Erenberg tied a Steelers record in his very first National Football League contest with seven kickoff returns in a Week 1 loss to the Chiefs at old Three Rivers Stadium. Erenberg would go on to return 28 kicks during the 1984 season, and while he never came close to taking one to the house–his longest return of the year was 47 yards–he did total a respectable 575 yards for an equally respectable 20.5 yards per return. 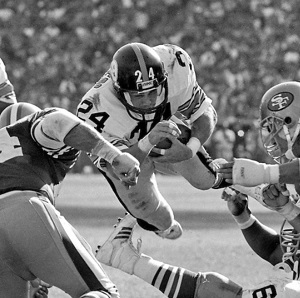 However, it was in the backfield where Rich Erenberg actually looked like the proverbial diamond in the rough while posting 405 yards and two touchdowns on 115 carries.

By this point in his career, fans had grown so disenchanted with the performance of Walter Abercrombie, who the Steelers selected with the 12th pick of the 1982 NFL Draft, some were suggesting he change positions from running back to receiver (he really did have excellent hands) in order to pave the way for Erenberg.

Speaking of receiving, Erenberg even showed some promise as a dual-threat running back in ’84, totaling 38 receptions out of the backfield for 358 yards and one touchdown.

If you’re adding at home, that’s 763 yards from scrimmage and three touchdowns. When you combine those numbers with his respectable return yards, that’s not a bad rookie year for a ninth-round pick out of Colgate, a tiny Division-I AA college located in Hamilton, New York. According to a 2012 article by theinsidepress.com that ranked the greatest athletes in Horace Greeley history (where Erenberg went to high school), Erenberg ws an All-County running back during his junior and senior seasons. At Colgate, Erenberg was a Division-I AA First-Team All-American in 1983 after breaking the record for most rushing yards in a season with 1,883.

Erenberg contributed quite a bit to an ’84 Steelers team that won the old AFC Central Division title by the slimmest of margins and then shocked the football world by upsetting the Broncos in the divisional playoffs and advancing all the way to the AFC Championship Game for the first time since the heyday of the 1970s.

Unfortunately, that ’84 season proved to be the highlight of the entire decade for the Steelers. And much like Weegie Thompson, who also had a promising rookie campaign in 1984, it would prove to be the high point of Erenberg’s career, as he never came close to duplicating his rookie season and was out of football after three years.

If you do a Google search of Rich Erenberg, you won’t find much information, other than he evidently still lives in the Greater Pittsburgh Area and went into real estate after football.

As for that article on the greatest athletes in Horace Greeley history, perhaps it’s no surprise that Erenberg was listed number one.

That’s usually how it goes for even the most obscure professional athletes–they were the BMOC (Big Man on Campus) in high school and college.

No, Rich Erenberg never came close to reaching stardom in the NFL. But in his rookie season, when the Steelers made it to the doorstep of the NFL’s grandest stage for the only time in a decade filled mostly with disappointment and struggle, he gave them just about everything he had.