From the grade book of a teacher who left for a 10 day professional conference only to return to find his classroom completely turned upside down, here is the Steelers Report Card for the loss to the 49ers. 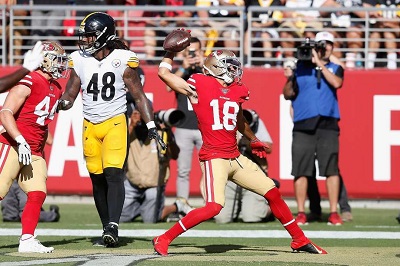 Quarterback
Those who’ve suggested rushing the Roethlisberger era to an end to begin rebuilding sooner rather later experienced reality therapy yesterday. To be clear, Mason Rudolph does not deserve to be a scapegoat. But even if his passing number were on par with Ben Roethlisberger and Neil O’Donnell’s debuts, Rudolph looked like a 3rd rounder making his first start rather than that of a franchise quarterback. Mason Rudolph did some nice things, made some ugly mistakes but ultimately couldn’t spark the team to a win. Grade: C

Running Backs
James Conner ran for 43 yards on 13 carries and looked OK as a rusher at times. He didn’t have a lot of help from the offensive line. Worse yet, he had yet another fumble in a critical moment, which is at least the third time that has happened in less than 16 full starts. Benny Snell had 6 yards on 3 carries and Jaylen Samuels ran some pass routes but didn’t see a ball thrown his way. Grade: F

Tight Ends
Vance McDonald had one catch on 2 carries and then left the game injured. Xavier Grimble had 1 catch for 3 yards in his place, and his presence in the blocking game was about as pronounced as his role in the passing game. Grade: C-

Wide Receivers
JuJu Smith-Schuster took one to the house showing the he does indeed retain his big play capability. But he was largely a non-factor outside of that play. Diontae Johnson looked good in his first start, but dropped at least one pass he should have caught. James Washington had two catches for 14 yards and is looking like a preseason-practice hero who doesn’t deliver on game day. Grade: D

Offensive Line
Mason Rudolph only got sacked twice, but had to scramble 4 times and at other times had to throw it away. The 49ers also recorded 5 tackles behind the line of scrimmage. Championship caliber offensive line play can elevate average running and passing games. But the Steelers aren’t getting anywhere near championship caliber play from their offensive line. Grade: D

Defensive Line
The Steelers defensive line harassed Jimmy Garoppolo, but the 49ers almost ran at will, particularly when they needed to. That’s not 100% their responsibility, but the line is where stout run defense starts. Grade: C-

Linebackers
T.J. Watt had an interception, fumble recovery, two passes defensed and two quarterback hits. Nice to see a premium pick delivering. Devin Bush had two fumble recoveries and led the team in tackles, but his inexperience continues to show. Bud Dupree got good pressure and helped force an interception. Mark Barron has yet to justify the free agency dollars the Steelers invested in him. The 49ers moved the ball in the 2nd half when they needed to, and the Steelers linebackers could not come up with a play to stop them. Grade: C

Secondary
Whether the Steelers decision to mortgage their future by trading for Minkah Fitzpatrick is unknown here today. But one thing is clear, he is easily the most dynamic member of the secondary. His interception off of a Joe Haden deflection was exactly the type of playmaking the Steelers secondary has been starved of for a long time. Terrell Edmunds was second in tackles, but has yet to make a splash play. Steven Nelson’s name hasn’t been heard much. The Steelers needed another play from the secondary in the 2nd half. They didn’t get it. Grade: C

Coaching
The Steelers coaches tried to establish the run to give Mason Rudolph a break. It didn’t work. The Steelers offensive line is doing a passable job in protecting the quarterback, but its run blocking leaves a lot to be desired.

Randy Fitchner made changes to the Steelers wide receiving corps, and there was some marginal improvement, but the wide outs are struggling to create separation. Why was Jaylen Samuels not used in the running game?

On defense the Steelers got opportunistic, which not something that can be said of recent Steelers defenses. However, the offense could not take advantage of those turnovers. Neither could the defense step up and make a stop when the team needed it.

Mike Tomlin, Randy Fitchner and Keith Butler have some work to do. Grade: D

Unsung Hero Award
If there is any unequivocal bright spot in this dismal Steelers 2019 season it is this man. Against the 49ers he added another sack, made a tackle behind the line of scrimmage and harassed the passer all day, and for that Stephon Tuitt wins the Unsung Hero Award for the loss to the 49ers.