The 2019 season has not been kind to the Pittsburgh Steelers, who can’t even seem to cut a break during their bye week. According to news reports, backup linebacker Anthony Chickillo was arrested over the weekend for an incident that took place in Wharton Township, Franklin County. 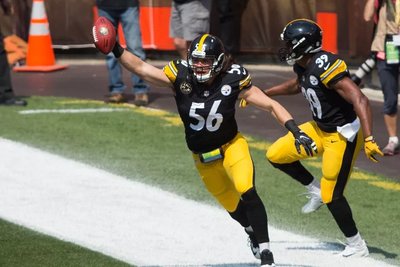 Anthony Chickillo recovers a blocked punt for a touchdown in the 2017 season opener at Cleveland. Photo Credit: Scott R. Galvin-USA Today via BTSC

WTAE’s Jim Madalinsky reports that the incident involves Anthony Chickillo’s girlfriend and that it took place at the Nemacolin Woodlands Resort, a luxury complex situated in southwestern Pennsylvania. Steelers PR director Burt Lauten told Joe Rutter of the Pittsburgh Tribune-Review, “We are aware of an incident involving Anthony Chickillo last night and are still gathering information. Until we have further details we will not provide any further comments.”

The Steelers cut Cedric Wilson yet gave James Harrison a considerable bit more slack, as Deebo finished the season as NFL Defensive Player of the year (the charges against Harrison were eventually dropped.)

The Steelers drafted Anthony Chickillo in the 6th round of the 2015 NFL Draft. Entering his fifth season, Anthony Chickillo serves as the primary backup to T.J. Watt and Bud Dupree, and has started 9 games in his NFL career. Last spring the Steelers resigned Anthony Chickillo to a 2 year, 8 million dollar contract in free agency. The move came as a bit of a surprise, but word was that the New England Patriots had made a similar and slightly higher offer.

Beyond Anthony Chickillo the Steelers also have Ola Adeniyi as a reserve outside linebacker.

When the bye week arrives, Mike Tomlin reputedly tells his players, “Don’t get yourselves in the news.” Chickillo it seems, wasn’t apparently listening.