The Steelers took a lot of positives and one glaring negative away from their victory over the Chargers. On the positive side:

About those injuries. The Steelers suffered several, but losing for the season Stephon Tuitt to a torn pectoral muscle is devastating.

Stephon Tuitt was in route to an All Pro Season, with 3.5 sacks, 7 QB hits and 6 tackles for losses. That’s an impressive six game stretch. In all of 2018, Tuitt had 5.5 sacks and 7 tackles for losses. But numbers as they often do, fail to capture the full picture. As “jujumojo” on Steel City Insider’s message board observed:

I honestly don’t think I have watched an individual Steeler defensive player dominate to the degree Tuitt has so far this season since probably James Harrison in his 2008-10 prime. Tuitt had simply been manhandling NFL linemen week in, week out.

Losing Stephon Tuitt represents a huge blow to the Steelers defense. But does it doom them for the rest of 2019?

With Tuitt Out, What, If Anything, Does L.T. Walton Bring to the Table?

Reading the head line, “Steelers put Stephon Tuitt on IR, Resign L.T. Walton to take his roster spot” inspires little confidence. Had the Bengals not claimed Fred Johnson off of waivers, one wonders if the Steeler would have even called Walton. 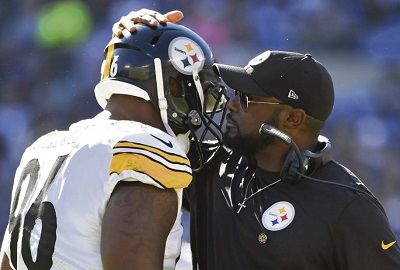 But, this isn’t the first time the Steelers have lost a dominating defensive lineman to a pectoral injury in mid-season. And it happened 3 years ago, and the outlook was bleaker then.

The Dallas Cowboys had just come to Pittsburgh and beaten the Steelers as Ezekiel Elliott scored not one, but two touchdowns in the space of about 1:20. Days later news broke that Cam Heyward was out for the year with a torn peck.

Cam Heyward was defense’s undisputed best player (Ryan Shazier was only just beginning to shed the “bust” label that a minority, as ignorant as it was vocal, of fans had been pinning on him.)

This site titled its article “As Cameron Heyward’s Season Ends – Steelers Nation Collectively Cries: “Game Over!” complete with video of Bill Paxton’s “Game Over! Game Over” clip from Aliens.

Yet, the exact opposite happened. Despite losing its best player, the Steelers defense not only halted their decline, it improved, tremendously. It says here that main factors fueling the turn around were:

But L.T. Walton also helped make that happen. During that final seven game stretch, L.T. Walton played in just under half of the defensive snaps.

The notion of “Stephon Tuitt injured, L.T. Walton to the rescue!” is plain silly. Tyson Alualu is the next man up. Javon Hargrave will undoubtedly see more time. Rookie Isaiah Buggs could conceivably get a helmet over L.T. Walton.

But if L.T. Walton’s return can’t be counted on as a strength, he certainly wasn’t a liability, at least at defensive end (nose tackle is a different story, see the playoff loss to the Jaguars) when he was pressed into action in 2016 and again in 2017.