It doesn’t matter what the situation is, fans want to blame him for the team’s failures. That is certainly understandable right now, and those #FireTomlin hashtags have no doubt multiplied in numbers over the past few weeks, thanks to a horrible start to the 2019 season that has been aided greatly by the year-ending elbow injury suffered by quarterback Ben Roethlisberger.

And when you’re only winning 20 percent of your games, the people aren’t going to like what they see when they look under the microscope. 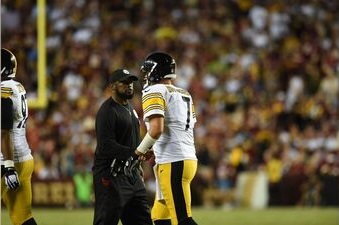 This is going to be the greatest coaching challenge of Tomlin’s career, and trust me, few fans are giving him the benefit of the doubt. It doesn’t matter who the quarterback is (Devlin Hodges will start in place of the concussed Mason Rudolph as the Steelers travel to Los Angeles to take on the Chargers on Sunday Night Football). It doesn’t matter how badly injuries have compromised his roster. If the 2019 regular season continues on its current downward trajectory, Steelers fans will put 100 percent of the blame on Tomlin’s shoulders and will want him gone.

The Redskins, off to an 0-5 start, fired Jay Gruden last Monday, and almost immediately, rumors began to surface that Daniel Snyder, the team’s “Boy Billionaire” owner who Myron Cope once suggested should go stick his head in a can of paint, was extremely interested in Mike Tomlin as his team’s next full-time head coach.

That wouldn’t happen in the immediate future, of course, not unless the Steelers fire Tomlin mid-season, which would be extremely out of character for them. And with the way the Rooney family has treated its head coaches over the past 50 years, it’s unlikely that the likely first losing season of Tomlin’s tenure would lead Art II to consider a change at head coach.

Maybe they don’t have to deal with the ugliness of terminating a man who has won more consistently than any Steelers coach ever has over his first 12 seasons.

Mike Tomlin signed a one-year extension with the Steelers this past summer, which was a departure from the past, when the team would always give its head coaches two-year extensions. This quickly led to speculation that the organization wasn’t too pleased with Tomlin’s performance in recent years.

It’s certainly no secret that some minority Steelers owners aren’t the biggest Tomlin supporters, and when you couple that with the one-year deal, maybe the Rooneys are starting to consider another direction for the franchise.

But replacing a head coach is a messy process, especially for a team like the Steelers that hasn’t actually had to do it for over five decades — Chuck Noll retired in 1992; and Bill Cowher resigned in 2007.

And both of those were voluntary changes. The last time the Steelers fired a head coach was when Dan Rooney let Bill Austin go in late 1968, before man had even walked on the moon.

However, if the Steelers can trade Tomlin’s rights to the Redskins for, say, a premium draft choice, that might be a different story. It’s no secret that Snyder isn’t afraid to over-spend for players and coaches, and while it seems ludicrous that he would part with a 2020 first-round pick that will surely be in the top five, you just never know with that boy billionaire owner.

It’s hard to say where these rumors started, but even though Tomlin dismissed them at his weekly press conference last Tuesday, they will likely persist until the Redskins hire a new head coach (veteran Bill Callahan was named interim head coach for the remainder of the season).

1-4 starts are no fun for anyone, especially fans who love their football team as much as Steelers fans do. Steelers faithful need a distraction. They need something else to focus on besides the failures of the football team.

For some, the dismissal of Mike Tomlin as head coach has been something of a crusade since shortly after Super Bowl XLIII, when he supposedly won a championship with Bill Cowher’s players. (Why don’t we ever ask why Kevin Colbert only wins Super Bowls with Tom Donahoe’s players…? Just Say’in.)

When it comes to Mike Tomlin, one has to wonder where his mind is at right now. Despite his rough exterior and macho persona, the man is a human being. Fact is, he’s never been fully embraced by a large segment of the Steelers fan base. You can draw your own conclusions as to why, but that is a fact.

Do you think he’s sick of hearing that he won a Super Bowl with another coach’s players? Do you think he’d relish the kind of autonomy he’d likely have in Washington, which would be a departure from the democracy that the Steelers organization has always been (even under The Emperor Noll)?

Daniel Snyder isn’t an easy man to work for, and the Redskins, a once-proud franchise, have been an ongoing joke for a very long time. But money talks. Also, Mike Tomlin, like most head coaches, has a huge ego. You don’t think he’d like the challenge of turning the Redskins around? He wouldn’t have to deal with the criticisms of those who think he only benefited from the furniture that the last tenant left behind.

“It all starts with the coaches,” many fans are fond of saying. And, for so many, it begins and ends with the head coach. It’s never the players fault. The other team gets no credit.

If you have the right man in place, you’ll win. (Never mind that, when asked about the Steelers remarkable run of success since 1969, Dan Rooney always insisted that it started with the players.)

According to many Tomlin critics, he’s never been the right man for the Steelers head coaching job.

Right now the tea leaf reading from several of the team’s most trusted beat writers, you know, guys who actually know and talk to the people whose opinions count on a regular if not daily basis, are telling us that the rumors are ridiculous.

But come early January, Steelers Nation will find out if those rumors about Mike Tomlin to the Washington Redskins aren’t so crazy, after all.