After the Steelers 27-14 win over the Miami Dolphins on Monday Night Football, Art Rooney II might do well to petition Roger Goodell to allow him to tuck the football safely away where the sun doesn’t shine.

And in each win the team has accomplished something. Against the Bengals Pittsburgh recovered its poise. In beating the Chargers, the Steelers defense dug deep and rediscovered its will to dominate.

And in the win over the Dolphins, one player displayed a fundamental quality that he will need to succeed in the NFL:  Toughness.

Football players must be tough. That includes quarterbacks. That might seem like an odd observation, but remember that Jack Lambert once remarked “Quarterbacks should wear dresses.”

Big Ben took so much punishment that night that Al Michaels suggested that he, and not Robert Downy Jr., should star in Iron Man II.

Quarterbacks bust be mentally tough. It’s an element that will never show alongside a player’s measurables. Yet it is the characteristic that separates quality quarterbacks from average ones.

A quality quarterback has to be tough enough to shuck off a couple of costly interceptions and turn around to throw touchdown passes.

Before two minutes had passed in the 2nd quarter, Mason Rudolph had thrown an interception that Miami converted into a touchdown. Had another interception mercifully negated by the grace of toe that barely tapped the sideline, and fumbled a ball which David DeCastro recovered. 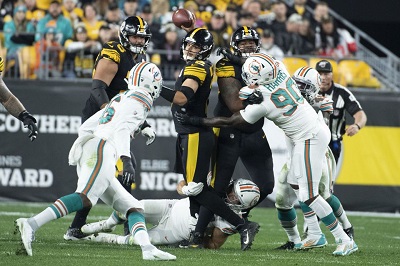 By that point in the game, James Conner and Benny Snell had ripped off a few impressive runs. But with Mason Rudolph unable to mount any sort of downfield threat, the Dolphins were up 14-0 and looked every bit like a mediocre team en route to a major upset.

Mason Rudolph responded, and his response resonated with the rest of the Steelers roster.

Mason Rudolph’s recovery began when he connected with Dionate Johnson for 12 yard while standing in his own end zone on 3rd and 11. He didn’t lead the team to a touchdown, but by the time Chris Boswell lined up for a 45 yard field goal, the Steelers had burned 7 minutes off of the clock.

Ryan Fitzpatrick took over at the Miami 29 yard line with 2:40 left to play in the first half – just enough time for a journeyman quarterback to move his team into scoring position.

While Mason Rudolph’s shaky play had been what had worried everyone prior to the previous drive, Pittsburgh’s defense had been equally putrid, particularly after putting on a “missed tackle clinic” that led to the Dolphins 2nd touchdown.

If anyone was wondering why the Steelers would break with more than 50 years of franchise tradition and trade their 2020 first round pick for Minkah Fitzpatrick, his pre-half interception explains a lot.

At that point the Steelers had 1:13 remaining in the half, two time outs left, a rookie quarterback who’d suffered a shaky start and the knowledge that they’d start the 2nd half with the ball. In other words, Mike Tomlin had every excuse he needed to feed the ball to James Conner and call it a half.

Mason Rudolph made him pay with a 45 yard strike to Diontae Johnson that included a Hines Ward-like block from James Washington that paved his way into the end zone. That was a strong finish to the first half, but the Steelers were still behind 14 to 10.

During the first 27 minutes of the Dolphins game, the Steelers defense had displayed little, if any of the dominance they’d been flashing since the 2nd week of the season. They must have been saving it for the 2nd half.

Mason Rudolph ran Steelers Nation through the spectrum of emotions Monday Night and the praise heading his way is well earned.

As Steel City Insider’s Jim Wexell reports, Mason Rudolph not only began to throw with more authority, he took command of the huddle, reprimanding Vance McDonald after one play, and even took issue with coaches for not calling plays fast enough.

All positive steps. But Mason Rudolph still has much to accomplish. JuJu Smith-Schuster’s heroics on the go-ahead touchdown were necessary because the ball was under thrown. With just over 8 minutes left, the Steelers took two deep shots down the field, attempting to lay the knockout punch.

The young 3rd round quarterback from Oklahoma State still has a long way to go. But his in-game transformation against the Dolphins suggests he has the mental toughness necessary to make the journey.