The NFL’s discipline arm swung into action in the wake of the melee that ended the Steelers-Browns Thursday Night game. Justice was swift, severe and, as to be expected under Roger Goodell, inconsistent and hypocritical.

The NFL has suspended Myles Garrett indefinitely for ripping off Mason Rudolph’s helmet and then smashing it on the quarterback’s head. Word is that “Indefinitely” = at least the rest of the 2019 season. So far, so good.

The NFL also suspended Steelers center Maurkice Pouncey for three games for rising to the defense of his quarterback, which included punching and kicking Garrett who’d been thrown to the ground by David DeCastro. 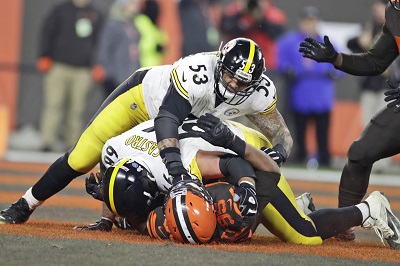 The homer in me wants to join the Tribune-Review’s Tim Benz in saying, “Free Pouncey,” as Pouncey certainly didn’t instigate hostilities and was defending a teammate. But two wrong never make a right. Suspending Maurkice Pouncey would send a pretty strong message that if one of your teammates is attacked, the only acceptable course of action is to work to stop the violence.

The NFL also suspended Larry Ogunjobi for attacking Mason Rudolph from behind and shoving him to the ground. Which seems to be consistent.

So I guess Roger Goodell’s message is: Defend a teammate who has been attacked and get suspended for 3 games. See one of your teammates attack someone from the opposing team and join them in the violence, and I’ll suspend you for one.

Kind of brings to mind the time when Roger Goodell fined $25,000 Richard Seymor for cold-cocking Ben Roethlisberger which was the same fine he levied on James Harrison for hits on quarterbacks where justification for punishment was questionable at best.

It says here that the NFL was right to act swiftly to suspend Myles Garrett and also Maurkice Pouncey. It was right to fine both the Cleveland Browns and the Pittsburgh Steelers $250,000 a piece. The league office has made clear that other fines and/or suspensions could be coming.

YEAR LONG SUSPENSION for Myles Garrett. Nothing less. It’s a criminal assault by using helmet as a WEAPON pic.twitter.com/UTOzuiTIEe

But Larry Ogunjobi wasn’t anywhere near the scuffle that evolved between Myles Garrett and Mason Rudolph. He made a point of running across the field and shoving Rudolph to the back. The violence stopped there, but he made an active decision to attack a player who’d already been attacked.

But of course Myles Garrett and Maurkice Pouncey are the signature faces associated with the melee, they’re who the public is going to focus on, and so that’s where Goodell directs his attention.

“Justice” in Roger Goodell’s Kangaroo Court of the NFL remains as arbitrary as it has always been.