“They’re clearly not trying to win,” is a phrase that’s been thrown around quite liberally during the 2019 regular season.

You’ve heard people say it about other teams like the Dolphins, Redskins and Giants. There are just a lot of bad football teams out there right now, and many of them decided to give up on the season before it even started. Why? They just didn’t think they had the pieces to compete and were more interested in seeing what they had in their younger players. They were also more interested in acquiring the best picks possible for the 2020 NFL Draft.

Maybe it’s just me, but this phenomenon of tanking–this mindset of “Well, we don’t have the pieces to win a title, so we might as well just blow the whole thing up and start over”–is becoming more and more prevalent in all of professional sports. It’s grown in popularity in baseball, basketball and hockey in recent years, and now it seems to have become a thing in the NFL. 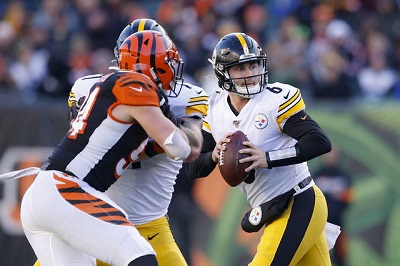 It is a bit surprising to me that NFL teams are starting to develop this mentality, considering football is the ultimate team sport, where one or two players don’t normally make a difference. I realize finding that franchise quarterback can go a long, long way in making that difference, but I also know the chances of landing one, even at the top of the draft, aren’t as great as one might think–this has been proven time and time again.

If you’re a fan of the Pittsburgh Steelers, you know this has never been an issue. You know that the team is always interested in winning, in competing, in fighting to stay in contention even when tanking might be easier.

And if ever there was a season where tanking might have been the route to go, it’s this one, where personnel issues have been a thing since Week 2, when franchise quarterback Ben Roethlisberger was lost for the rest of the year with an elbow injury that required surgical repair.

After losing four of its first five games–including two of the first three that young Mason Rudolph started at quarterback–it looked like Pittsburgh would have no choice but to tank. And after Rudolph was knocked out of the Ravens game with a concussion and would miss the following week’s match-up against the Chargers in Los Angeles, how could the team not throw in the towel, especially with Devlin Hodges, an undrafted rookie quarterback who was cut in training camp, as the starter?

Fast-forward to today, and the Steelers are now 6-5 and currently sit in the sixth and final playoff spot in the AFC. Yes, the odds still seem fairly long that they’ll actually qualify for the postseason, especially with such a putrid offense, one that is not only dealing with the absences of so many key cogs–including injured receiver JuJu Smith-Schuster, injured running back James Conner and suspended center Maurkice Pouncey–-but with a full-blown quarterback controversy. 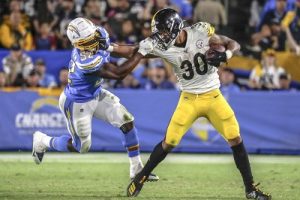 That’s right, Hodges, the undrafted rookie, the guy known as “Duck” thanks to winning a duck-calling contest when he was a child, will start against the Browns this Sunday at Heinz Field, a game with huge playoff implications.

If Pittsburgh wins, it will improve to 7-5, effectively eliminate Cleveland from the race (the Browns would drop to 5-7) and put itself in a prime position for a postseason berth.

The stakes couldn’t be any higher. Yet, not many are giving the Steelers a chance in this game. I get that. But it also feels like not many people want the Steelers to win because, well, even if they make the playoffs, what are the chances of them doing anything?

“I’d rather see them not make the playoffs if they’re just going to go one-and-done,” is a popular phrase you’re hearing from Steelers fans this season.

Another phrase you hear thrown around these days–the era of the tank–is “I’d rather see the Steelers go 3-13 and reload with high draft picks next year.”

Really? Would you also much rather spend a year in a coma? That’s what you’re saying in a sports sense if you want your team to tank for picks. How could you possibly enjoy such a season?

During my weekly Steelers podcast this past Monday–The Hangover–my co-host reflected on the 2002 campaign–the one that gave us Tommy Gun (Tommy Maddox) at quarterback–and how that season, one that ultimately saw Pittsburgh win an exciting wildcard game against the Browns at Heinz Field before bowing out the following week in an equally exciting, if extremely heartbreaking, overtime loss to the Titans in the divisional round, helped get him through some personal issues he was dealing with.

Isn’t that what sports are all about? They’re a distraction, a pastime, they’re their to make us forget about the tough issues in our own lives.

Sure, we’re talking about sporting events–games–but if they weren’t important on a grand scale, they wouldn’t be nearly as popular as they are.

I realize the Steelers chances of reaching and winning the Super Bowl are really, really slim. But I also know how tickled I will be if they actually qualify for the playoffs. I also know how excited I’ll be in the week leading up to whatever postseason match-up Pittsburgh may find itself in. I also know how nervous I’ll be watching that game, and how ecstatic I’ll be if the Steelers happen to win. Those are the times you call people out of the blue (who calls anyone anymore?) just to say, “Did you see that?”

The Steelers may give you an opportunity to do and feel all of those things this January, and isn’t that a lot better than tanking for a higher draft pick next spring?

Thank you, Pittsburgh Steelers, for giving your fans something to hope for this Thanksgiving and beyond.