Taken from the grade book of a teacher who is proud to see new members of his class step up when called upon, here is the Steelers Report Card for the win over the Cardinals. 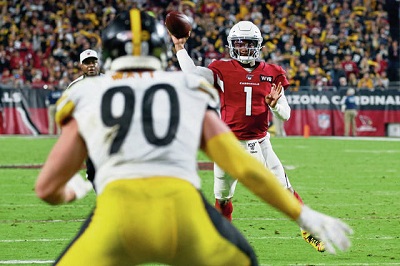 Quarterback
For the second straight week an undrafted Devlin Hodges defeated a number one overall pick. Hodges was an economical 16 for 19 for 152, but he ran the two minute drill well, and stitched together two clock-consuming drives. He also coughed up the ball and unnecessarily stopped the clock late. Stil, it was a good day for Devlin. Grade: B

Running Backs
The opening drive saw all four Steelers running backs touch the ball. Kerrith Whyte and Benny Snell clocked in at 41 yards total, with Whyte doing his damage on longer runs. Jaylen Samuels touched the ball 9 times, while Trey Edmunds had one catch for 7 yards. Benny Snell’s fumble helped give the Cardinals life, but other than that it was a good day for the running backs. Grade: B

Tight Ends
Vance McDonald had 1 catch for 3 yards before leaving the game with a concussion, leaving Nick Vannett as the lone healthy tight end. Grade: C+

Wide Receivers
A week ago we were wondering if we should worry about Diontae Johnson, today he looks like a rookie on the rise, after making 3 critical catches in addition to a 16 yard reverse that helped secure victory. James Washington only had 4 catches for 33 yards, but drew a pass interference penalty and helped keep the clock moving. Deon Cain only had one catch, but it went for 22 yards and converted a third down. Grade: A-

Offensive Line
The Cardinals sacked Delvin Hodges 3 times and hit him 4 times. The Steelers average 4 yards per carry on the ground. Those are overwhelming numbers, but Pittsburgh did have an edge in time of possession which indicates that the offensive line turned in a respectable performance. Grade: C+ 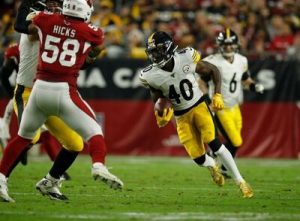 Defensive Line
Kyler Murray is a mobile quarterback, and mobile quarterbacks have hurt the Steelers by getting out of the pocket. Responsibility for containing quaterbacks begins with the defensive line, and Murray got all of 2 yards on 6 carries. Outside of a handful of runs, Arizona running backs were ineffective. Cam Heyward helped snuff out any chance of a Cardinal comeback with sack. Grade: B+

Linebackers
For the first time since September, T.J. Watt did not have a sack, but Watt made one of the most consequential plays of the game by interception Kyle Murray in the end zone. Mark Barron led the Steelers defense with 7 tackles including one sack, followed by Bud Dupree who had a sack and two tackles for losses. Vince Williams also had a tackle for a loss and critical 3rd down sack. Grade: B+

Secondary
Joe Haden logged his 3rd and 4th interceptions in the course of the last 30 days, and batted away two more passes. Minkah Fitzpatrick “only” had one tackle. But it was for a loss, and stuff out a QB run on 2nd and goal form the Steelers 3. Steven Nelson might not have had the “Splash” plays, but he neutralized a goal line pass for zero gain, and tied for the team lead in tackles. Terrell Edmunds shared that tie for the lead in tackles, and dropped one ball carrier behind the line of scrimmage. One of the reasons why Muarry was sacked so much was that he simply had nowhere to throw…. Grade: A- 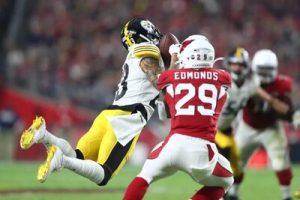 Special Teams
On the plus side, Diontae Johnson’s 85 yard punt return gave the Steelers the fast started they’d needed. Chris Boswell was perfect kicking and Jordan Berry boomed off a 69 yard punt….

…Which Pharoh Cooper returned for 29 yards. To make matters worse on the ensuing drive, the Cardinals converted a fake punt. Fortunately, Joe Haden ended that drive with an interception, but these types of special teams snafus are exactly the types plays that can fuel upsets by inferior teams.

Which brings us to the Steelers botched fake punt. Mike Tomlin is taking responsibly for it, although reports indicate that someone tried to call it off, but Jordan Berry failed to get the message. The play allowed the Cardinals to pull within 6:44 left to play. The error could have been catastrophic. Fortunately it wasn’t, but  it brings the group grade down. Grade: C-

Keith Butler’s defense gave up one clean touchdown drive, but the unit stepped up and killed two more drives that were on the verge of scoring with interceptions. They also stoned another drive that reached their 3 forcing a field goal. Most of the Steelers turnovers have come at home, but Butler’s boys showed they were capable of taking it away on the road.

With this win, Tomlin clinches his 13th consecutive non-losing season, and if you want to see first hand evidence of Tomlin’s coaching influence, look no further than the contrast between Diontae Johnson’s play against the Browns and against the Cardinals. Tomlin’s strength is as a leader of men, and he’s got the men on this team pulling together, and because of that, they’re winning. Grade: B+

Unsung Hero Award
Regardless of how the Steelers 2019 season ends, people will forget this play. In fact, many have forgotten it already. But on 1st and 10 from the Cardinals 23, with 1:08 remaining in the first half, Chandler Jones strip sacked Devlin Hodges.

The ball lie there for the taking and an Arizona recovery would wipe 3 all but certain points off the board. Matt Feiler jumped on the ball, and the Cardinals never had a chance and for that he wins the Unsung Hero Award for the Steelers win over the Cardinals.