As Tony Defeo pointed out on Behind the Steel Curtain, it is clear that the Tennessee Titans deserved that final 2019 AFC Wild Card spot far more than the Pittsburgh Steelers did. Their wild ride came to an end yesterday in Kansas City, but Mike Vrabel took his team much farther than Mike Tomlin could have taken his.

People forget, but the Pittsburgh Steelers actually drafted Mike Vrabel in the 3rd round of the 1997 NFL Draft. The third round of the NFL Draft was the Money Round for Tom Donahoe. Tom Donahoe was hit or miss with his first and second round picks. But man, did he nail it with his third rounders, grabbing guys like Hines Ward, Joey Porter and Joel Steed. And Mike Vrabel.

Even Steelers draft history geeks rarely list Vrabel alongside Donahoe’s other 3rd round steals because Mike Vrabel made his contribution in New England, not Pittsburgh.

Legendary Steelers defensive lineman coach John Mitchell believed in keeping his starting defensive lineman fresh by rotating in backups. And if you were good enough to be part of the rotation, you’d be going into the game when your number was called, regardless of the situation. 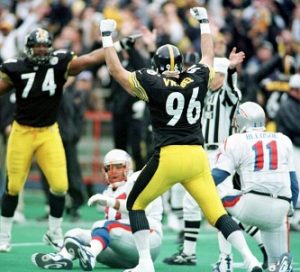 So as fate would have it, with the Steelers defending a slim 7-6 lead against the Patriots at Three Rivers Stadium, rookie Mike Vrabel found himself on the field in during a drive the started less with less than 1:44 left to play. Bill Cowher had opted to go for it on 4th and one, but Kordell Stewart got stuffed.

While 1:44 isn’t a ton of time, it is sufficient for a veteran quarterback such as Drew Bledsoe to go 99 yards. And the Patriots started to move, going all the way to their own 42 with just under a minute to play, 2 time outs and a fresh set of downs.

Mike Vrabel got his first win as a rookie player by forcing a turnover against a New England Patriots quarterback sealing the win for his team.

That win propelled rookie Mike Vrabel into the AFC Championship where he would lose at the hands of a hot comeback effort authored by an AFC West quarterback. Sound familiar?

Sometimes history plops pretty parallels like that into your lap.

Mike Vrabel the Steelers Linebacker that Got Away

Their appearance in the 1997 AFC Championship game seemed to confirm that the Tom Donahoe and Bill Cowher had found the formula for winning while weathering annual exoduses of free agents. Indeed, in January 1998, headliners like Chad Scott, Will Blackwell, Mike Vrabel, Steve Conley and Earl Holmes, the Steelers 1997 Draft appeared to be a winner.

The move seemed to be a natural. After coming back strong from a serious knee injury, ankle injury and staph infection had struck down Greg Lloyd, making it clear that legendary linebacker would have to be replaced. Mike Vrabel lost the weight and made the move.

To win the starting job to replace Greg Lloyd, Mike Vrabel only needed to beat out Carlos Emmons. That might not sound like a tall order, but injuries would plague the summers of both 1998 and 1999 for Mike Vrabel. And by 1999, Joey Porter’s arrival also gave Mike Vrabel competition.

Coaches expected Porter to win the starting spot in 1999 after Carlos Emmons defected to Philadelphia as a free agent and Porter complied. That season, Jason Gildon and Joey Porter combined for 23 and half sacks.

He went to New England. Bill Belichick installed him as a starter. In 2001 he had 3.5 sacks and 2 interceptions while Gildon and Porter combined for 21. The Steelers had made the right move. But by the time Vrabel was catching touchdowns in spot duty as a tight in in Super Bowls, Jason Gildon was clearly falling behind in his race with father time.

Clearly, Vrabel had had far more “Upside” than Gildon, but such 20/20 hindsight wasn’t available in the ’00 off season.