Count this as another time when a blogger begs to be wrong, but this time gets his wish.

Less than a week ago yours truly suggested that COVID-19 would test “The Steelers Way” like never before. Namely, the expected 2021 NFL salary cap drop salary cap drop would complicate the Steelers ability to do one of the things they’ve always done best – resign their own players before they reach free agency.

I wasn’t alone. Just three days ago Ed Bouchette of The Athletic was beating a similar drum of gloom and doom one the prospects of keeping Cam Heyward in Pittsburgh.

Steelers.com announced that Cam Heyward had signed a 5 year extension, and Jeremy Fowler of ESPN reports that the deal is for $75.1 million dollars and includes 65.6 million in new money. The deal will make Heyward the highest paid defensive player over 30. 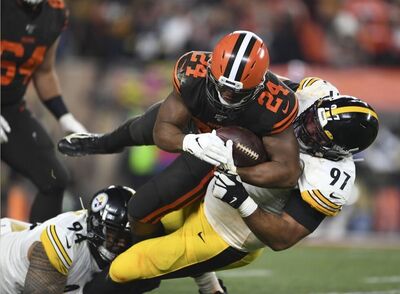 Although Cameron Heyward will turn 31 this year, he is coming off what was arguably his best season thus far. Cam Heyward was a one man wrecking crew in 2019, registering 9 sacks, 11 tackles for losses, notching 23 QB hits, defensing 6 passes while making a career record 83 tackles.

Signing Heyward a “Win” But Complicated Challenges Lie Ahead

Signing Cam Heyward represents a major win for the Steelers front office, as it keeps their biggest player off the market long before the bidding will ever start. But Art Rooney II, Kevin Colbert and Mike Tomlin have difficult personnel choices to make.

Starters JuJu Smith-Schuster, James Conner, Bud Dupree and Matt Feiler will all reach the end of their rookie deals this year, and veteran Alejandro Villanueva is heading into the final year of his contract. Key reserves such as Mike Hilton and Cam Sutton are also heading into their final years.

The Steelers already have 40 players under contract for 2021 costing approximately 197 million dollars, putting them 22 million over the projected 2021 salary cap before factoring in Cam Heyward’s new deal or the 2021 draft class.

Difficult decisions lie ahead, but fortunately Cam Heyward won’t be a cap causality.