The Steelers defeated the Cleveland Browns 38-7 at Heinz Field to deliver Pittsburgh’s first 5-0 start since 1978. This was the franchises’ biggest regular season clash since the Steelers 27-7 AFC Central clinching win in December 1994. 2020’s edition had all of the makings of a barn burner.

Instead of a barn burner, the Steelers blew out the Browns for one simple reason: Pittsburgh’s poise was on display throughout the game, Cleveland’s was MIA. 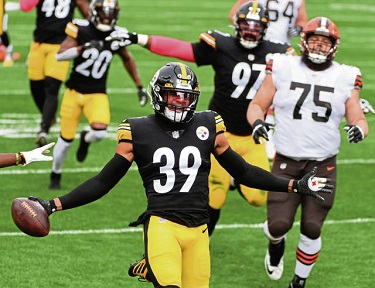 The Butler Calls It:  Minkah is Just Fine

As if on cue, the Steelers offense marched down the field after a series of strong James Conner runs, reaching the Red Zone only to settle for a Chris Boswell field goal. Another week, another touchdownless opening drive.

Minkah Fitzpatrick was a difference maker for the Steelers a year ago; his big plays easily turned the outcome of 2 or 3 games if not more.

Yet, Minkah had kept a low profile thus far in 2020. While that might not be the liability that some suggest, the fact that Minkah’s name hasn’t been mentioned much and the Steelers 3rd down defense has been atrocious are hard to chalk up to coincidence.

Pressured by reporters about Fitzpatrick during the week, Steelers defensive coordinator Keith Butler retorted, “Minkah will be fine.”

Butler was right. On the Brown’s first third down Minkah played Baker Mayfield like a harp, picked off the ball and ran it into the end zone to put Pittsburgh up 10-0.

The stat sheet suggests that Ben Roethlisberger had a stellar game, with a 101 passer rating, a 14 for 22 yard completion rate, one touchdown and no interceptions. Ben Roethlisberger did play a good game, but he did anything but start strong. 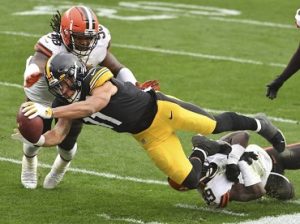 The Steelers next two possessions resulted in quick three and outs, including one that saw Ben Roethlisberger give up a 12-yard sack. With the help of a Devin Bush and Stephon Tuitt sack, the Steelers defense kept the Brown’s honest by forcing punts, but consecutive 3 and outs can demoralize an offense – if they let it.

The Steelers offense declined to do that, and after some chink-and-dink action to JuJu Smith-Schuster and Eric Ebron, Ben Roethlisberger lit it up with a 37 yard pass to Mapletron aka Chase Claypool who set up a 1 yard James Conner touchdown.

Once again, poise instead of panic prevailed for Pittsburgh.

A 17-0 lead after only 20 minutes of play is hardly a death sentence in the NFL, but it does provide an inflection that separates pretenders from contenders. The Browns responded to their 17 point deficit with:

Credit Cleveland for tacking on a touchdown before the half. The Browns got the ball back to start the 2nd half. A long, workman like touchdown drive was all that separated them from making it a 10 point game.

Randy Fichtner’s offense couldn’t do much with its first chance of the half. Cleveland got the ball back, won a replay challenge, and faced a 4th and 1 at their own 29. This time T.J. Watt and Cam Heyward stoned Kareem Hunt for a 1-yard loss.

While they only had 28 yards to go, the Steelers managed to milk 5 minutes off of the clock as they converted their takeover on downs into another touchdown with a 3 yard Chase Claypool run.

Claypool’s touchdown run put the Steelers up 31 to 7 effectively ending the game as the third quarter drew to a close. But Pittsburgh’s poise, and Cleveland lack of it continued to shine brightly through the 4th quarter action:

And then there’s this:

Pittsburgh’s poise was present on many other occasions against the Browns. Joe Haden hadn’t had the strongest start to his season, yet he stepped up to make several plays. Benny Snell showed he can be a sure handed closer, in defending late leads.

The day’s most ominous moment came in the late in the first half when Devin Bush left the game with an injury that Mike Tomlin declared as “significant,” which is likely an ACL tear that will end his season. Yet, Pittsburgh maintained its poise as Robert Spillane did an admirable job answering the “Next man up” call.

We understand why. Both teams arrived at Heinz Field with 4 wins. Only one would leave with 5. On his first day in Pittsburgh, Mike Tomlin postulated that sometimes the biggest test isn’t how you handle failure, but how you handel success.

The 2020 season is still young, but thus far Pittsburgh is passing that test with flying colors. Cleveland? Not so much. And that’s why the Steelers are 5-0.